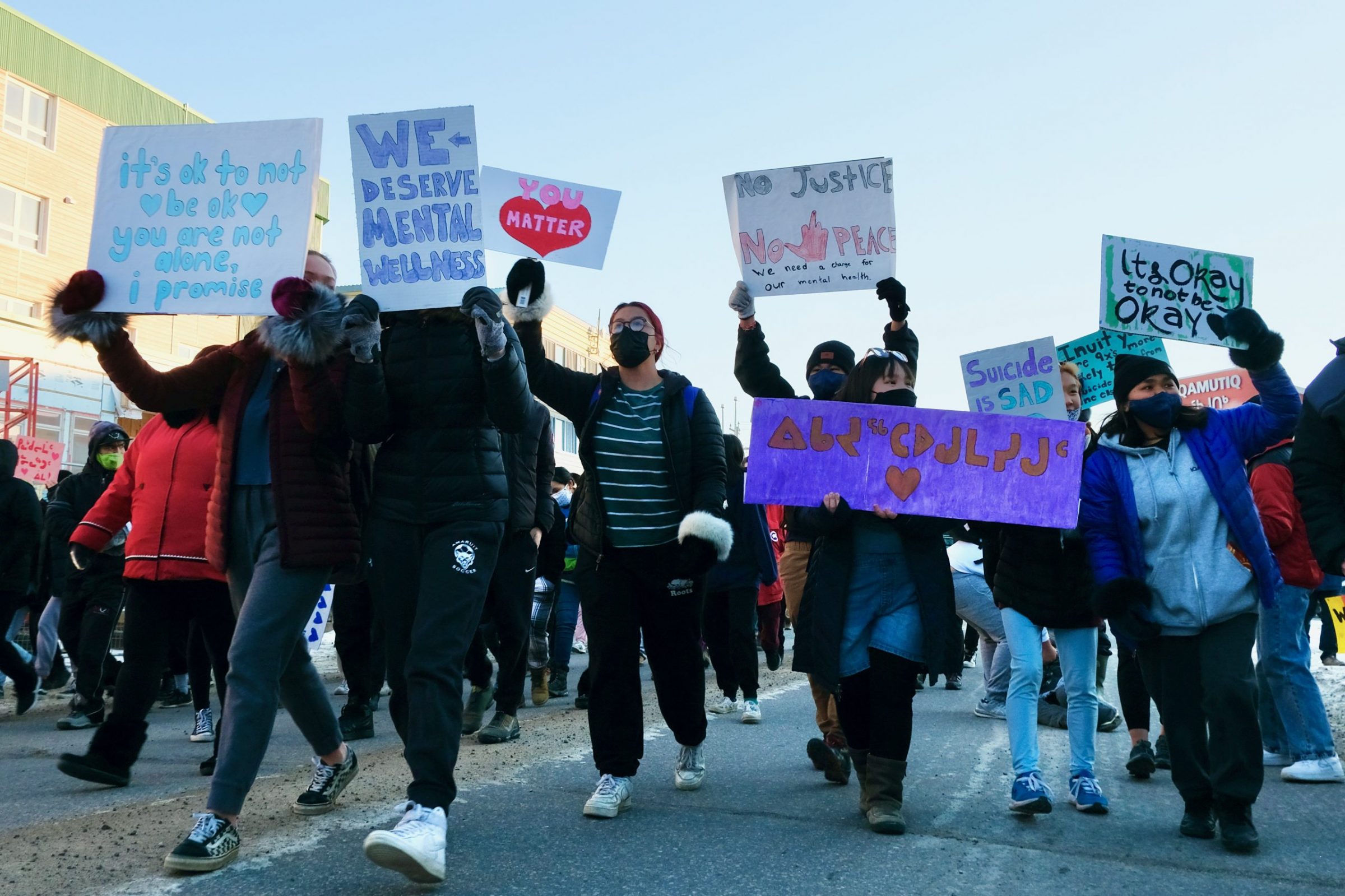 Iqaluit’s youth took the the streets on Tuesday to demand the federal government’s help in reducing the rate of suicides in Nunavut. (Photo by Mélanie Ritchot)

Over 100 students, parents and local politicians marched from the Four Corners to the legislature, where they filled the lobby and tried to make their pleas heard for more mental health resources and suicide prevention.

“It’s to the point where we’re wondering who’s next,” said Grade 12 student Minnie Akeeagok, who attended the protest.

“If you go to any person and ask if they know anyone who died from suicide, they will surely have at least two to 10,” she said. 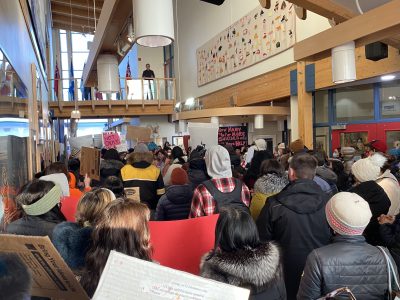 Others wrote, “We deserve mental wellness,” and, “How many more until we’re finally listened to?”

“They have in-person help that they could reach out to and here, we have hotlines.”

She said not everyone is comfortable speaking with a stranger about their mental health concerns over the phone, and sometimes their peers aren’t comfortable talking about it.

“You have no one else to turn to,” she said. 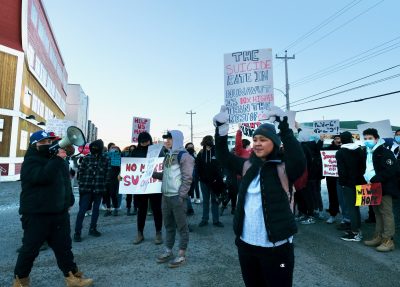 Amy Ullikatar stood in the middle of the four corners intersection holding a sign that states statistics on suicide rates in Nunavut. (Photo by Mélanie Ritchot)

Grade 12 student Amy Ullikatar said she joined the protest to show support for her community and show the government that Nunavummiut want more access to mental health services.

“I’ve experienced losing a loved one to suicide and it’s really, really devastating losing someone that way,” she said.

Ullikatar said if she or her peers were to try to get mental health support, there are hotlines to call, but in-person services aren’t available every day of the week and aren’t accessible at all hours of the night.

“What if I feel bad on a day it’s not open,” she said, “or if there’s someone who’s not able to go during the day because of work?”

The suicide rate among Inuit was nine times higher than in non-Indigenous populations between 2011 and 2016, when 250 deaths by suicide were reported by Statistics Canada.

“It’s really challenging with the hours they provide us with,” Ullikatar said.

In most communities outside of the territory’s capital, mental health resources are available at local health centres.

One of the organizers, Deion Pearce, said a place for youth to go 24-hours of the day is also needed.

“When times at home are tough, there are many children who just walk around at night and have nowhere to go,” he said.

“It’s about time we get what we deserve,” Pearce said. 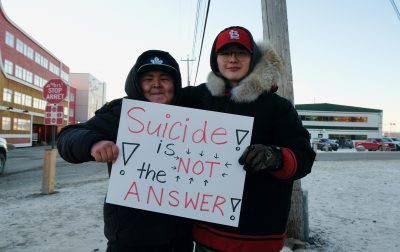 Another organizer, Joseph Ashoona, said he hopes the federal government will see the need for a mental health facility and more resources in Iqaluit.

“With the proper help from the Canadian government, I have a feeling we could make a change, and we could stop these suicides from happening in our town,” he said.

“I just don’t want my grandchildren to go through the same thing I went through and live in this struggle with our mental health issues,” Ashoona said.

He said this is just the first step and he plans to organize more protests in the future and keep raising awareness for suicide prevention.

Iqaluit residents can request same-day mental health appointments Monday, Wednesday and Thursday by calling 867-975-5900 when the clinic opens at 8:30 a.m.