Iqaluit’s French students take classes out on the tundra 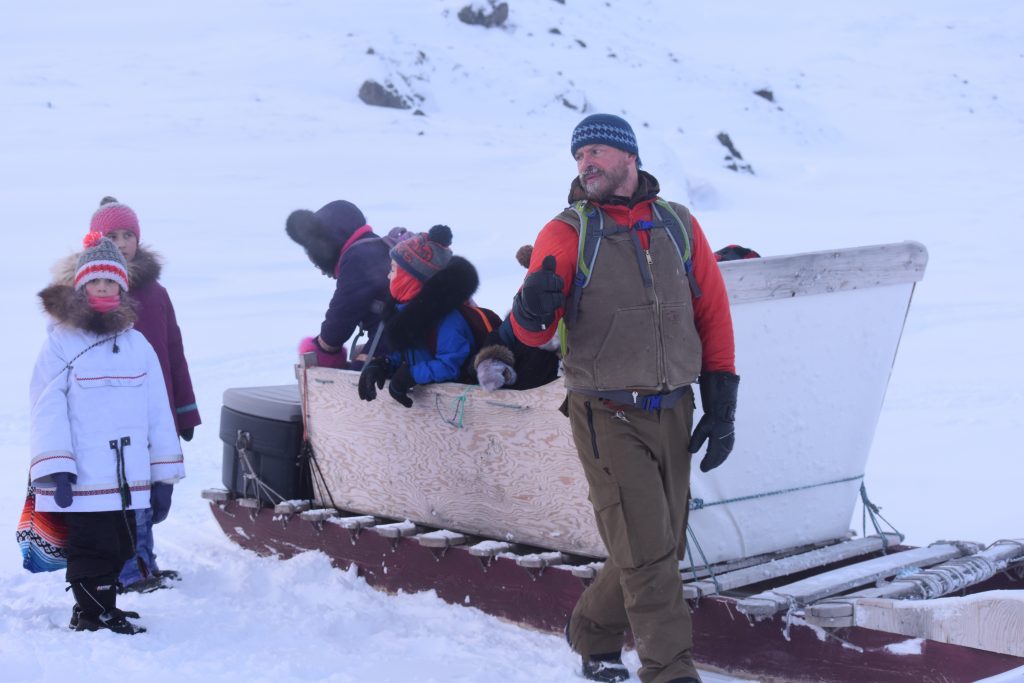 Iqaluit’s francophone school is letting nature teach its students once a week.

Every Wednesday afternoon throughout the school year, a group of students between kindergarten and Grade 12 from École des Trois Soleils has a class scheduled out on the land.

This is the second year the school has run the “Sila” program, says principal François Ouellette. (Sila can represent weather, the environment, climate, or the world outside.)

Ouellette said he understands the Inuktitut word “sila” as the equivalent of the French term “plein air,” which is a combination of the weather and breath. 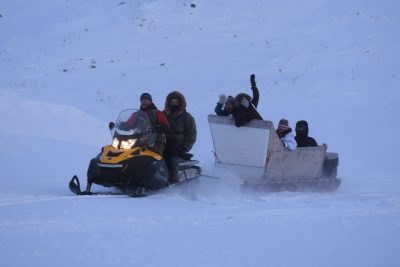 Grade 2 and 3 students from École des Trois Soleils ride in a sled behind a snowmobile this Wednesday. (Photo by Courtney Edgar)

Benoit Havard—described as a “professional Arctic cowboy” by Ouellette—leads the classes, driving the snowmobile and sled back and forth to take groups of 20 or so kids at a time to the camp.

He is an outfitter and adventurer who wrangled reindeer in Siberia and wrote a book about it.

At the camp, with the help of instructors and volunteer supervisors, Havard teaches the children things like the cardinal points, nature, animals and survival skills.

If you kick your heel up and against the ground repeatedly, it brings circulation back to your feet, he says, demonstrating.

At the end of the school year, some of the older children will get to go on a fishing and camping trip to practice all they have learned in their classes out on the land. 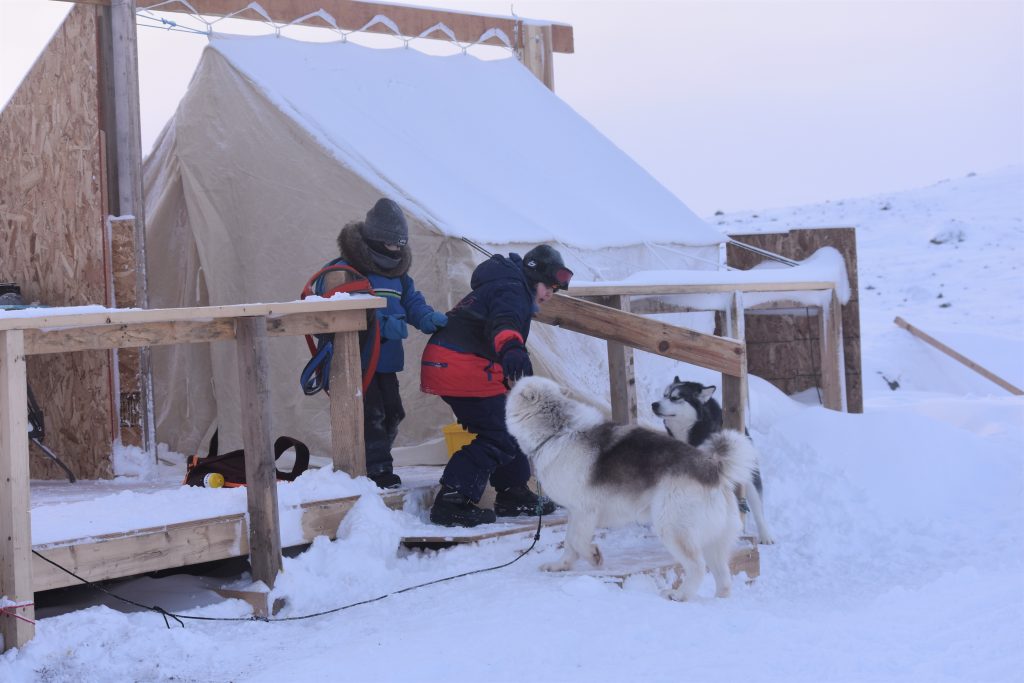 With the help of parent volunteers, Benoit Havard has built a camp area for students. (Photo by Courtney Edgar)

On Wednesday afternoon, a group of second and third graders travelled to the camp on three sled shuttles.

Then Havard led a treasure hunt. Its clues were rich with Arctic animal trivia, hidden out around the tundra, following a short lesson about cardinal points. 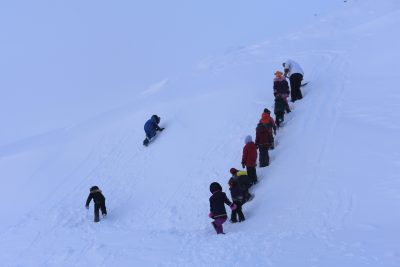 Havard always brings his two dogs on these trips. The children take pauses from activities to roll in the snow with the sled dogs and rub their bellies.

With the help of parent volunteers, Havard built a structure for the students’ camp area. They used salvaged wood.

A few wooden stairs lead up to a landing where there is one canvas tent so far. It was built to hold two, Havard says.

In the tent are camp chairs, benches and a small Coleman heater.

The children warm up in the tent if they get cold before their end-of-day hot chocolate. 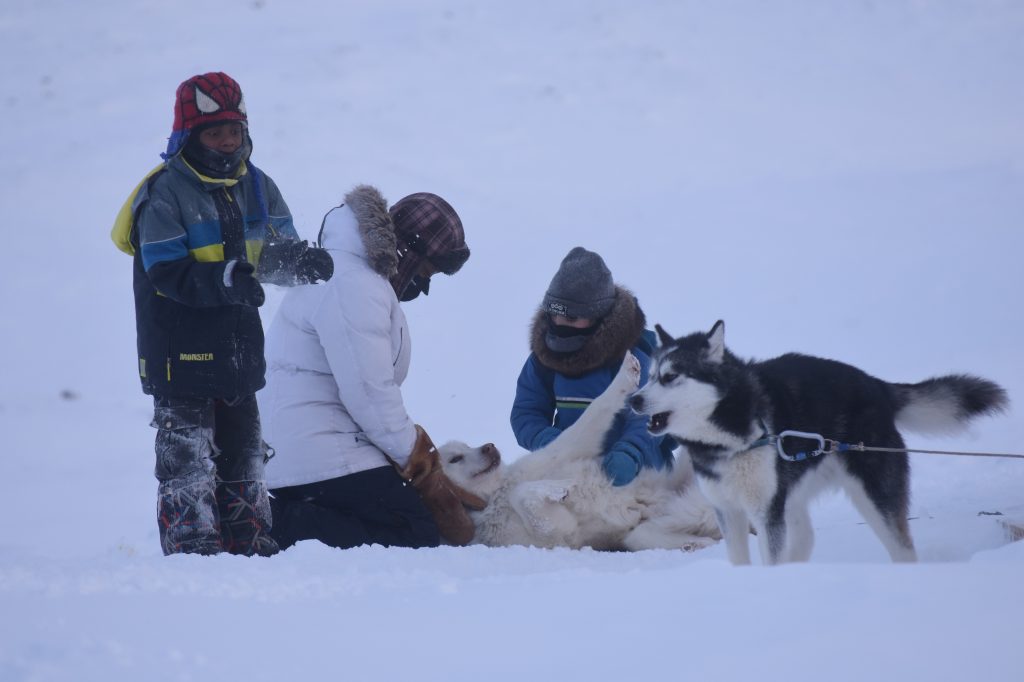 While Havard is not Inuk, he and the school try to incorporate Inuit Qaujimajatuqangit principles in their outdoors learning, Ouellette says.

Additionally, they are working on involving Inuit elders to teach the students, he says, but it poses challenges since not many Inuit are also able to speak French to the students to follow the school’s language mandate.

Christine Bérubé, a community counsellor at École des Trois Soleils, says that the Sila project is good for mental health, giving kids a chance to be outside more than just at recess.

Bérubé also says it gives students a necessary connection to their location in a way you would not have inside a classroom.

“It helps them develop a sense of appreciation for the land,” Bérubé says. 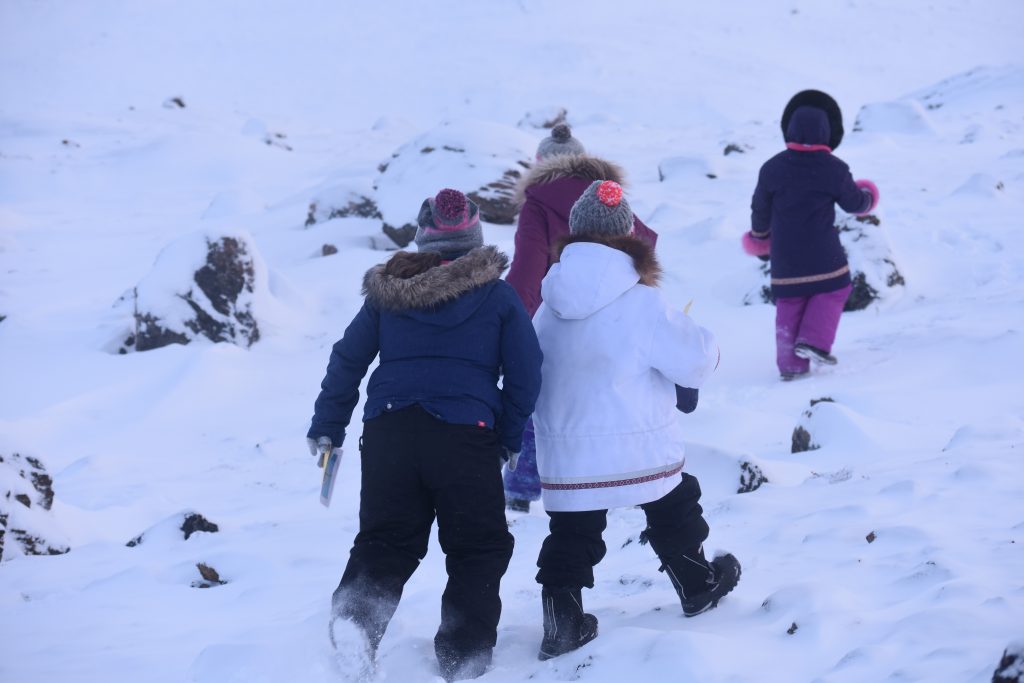