Iqaluit’s water test results: what we know and don’t know 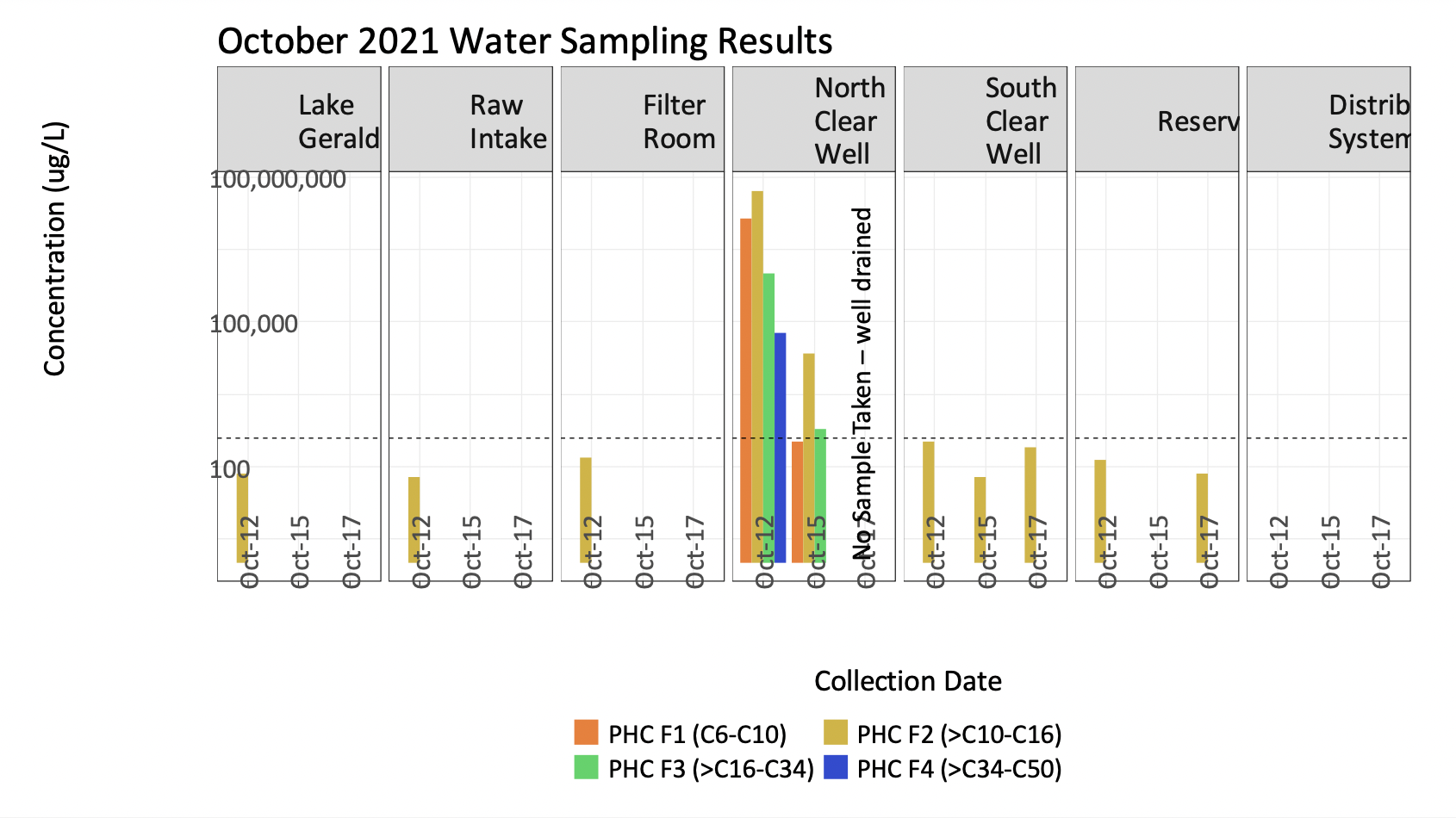 This graph shows levels of F2 hydrocarbons found in Iqaluit’s water treatment system earlier this month. F2 hydrocarbons include substances such as diesel and kerosene. (Graph courtesy of the Department of Health) 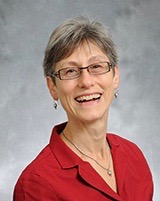 They are missing key information, including labelling and actual concentrations for each compound detected, said Miriam Diamond, a professor of earth sciences at the University of Toronto.

Diamond is one of two experts Nunatsiaq News asked to help interpret how the data were presented in the graphs.

“These results give rise to too many questions, including what I would say is incomplete data and certainly very poor visualization,” she said.

One graph shows sampling results for hydrocarbons classified as F2, which include diesel and kerosene. These were found at various levels intermittently throughout the water treatment process, except the distribution system, between Oct. 12 and 17.

The other graph shows individual compounds found in the water, including benzene, ethylbenzene, toluene and xylene. 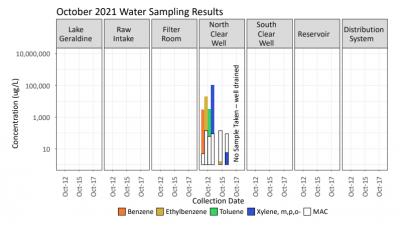 This graph shows levels of individual compounds found in Iqaluit’s water treatment system. The white bars show maximum acceptable amount set by the federal government’s Guidelines for Canadian Drinking Water Quality, while the coloured bars show how much of each compound was found. (Graph courtesy of the Health Department)

Samples taken from the treatment plant’s North Clear well on Oct. 12 found each of these compounds, but Diamond questions the way the graph presents the data.

“Without having actual concentrations, it’s very hard to interpret these [graphs] yourself,” she said.

On the graph, at first glance it looks like the contaminants found were about two to five times higher than what is considered safe, but the amounts found in the North Clear well that day were much higher.

Although the Department of Health still has yet to publicly release the full sample results, spokesperson Chris Puglia shared a specific set of results with Nunatsiaq News on Thursday — the concentrations of compounds found in the North Clear well on Oct. 12.

The concentration of benzene in that well on that day, for example, was 600 times higher than the maximum acceptable amount set by the federal government’s Guidelines for Canadian Drinking Water Quality, according to the department.

The concentration of ethylbenzene in that well on Oct. 12 was 135 times higher than the maximum acceptable amount; xylene was 1,211 times higher and toluene was 50.8 times higher.

Diamond said the graphs use the wrong kind of grid lines — linear lines on a logarithmic scale that grows exponentially along the left-hand side of the graph — which explains why they don’t look like they are plotted accurately.

She also said the data is not reported consistently.

For example, on the graph showing F2 hydrocarbon results, there are no bars representing contaminants in the reservoir on Oct. 15. It’s unclear whether that means the reservoir wasn’t tested, or whether nothing was detected — if that’s the case, a proper graph would say “undetected,” she explained.

“You don’t present a graph without proper labelling,” she said.

Diamond said as a general rule, people shouldn’t believe anything until they see the data to back it up.

Charles Jia, a professor in the department of chemical engineering and applied chemistry at the University of Toronto, agrees the graphs are hard to read at first glance partly because of the logarithmic scale.

“The concentration of hydrocarbons in the water sample is so high, if they used a linear scale, they would not be able to plot it,” Jia explained.

“But, if [they] want to be clear, just give those numbers.”

The graphs do not show detectable amounts of benzene, ethylbenzene, toluene or xylene further along Iqaluit’s water distribution system, and Patterson says he’s found no evidence they made it to people’s taps.

These are what Patterson has described in news conferences as “contaminants of concern” because of the health effects they can cause.

Benzene, for example, has been shown to cause cancer in humans. It can also affect people’s blood and immune systems if exposed to amounts higher than the safety threshold, according to the Guidelines for Canadian Drinking Water Quality.

Benzene can affect humans who drink contaminated water, inhale steam from it, or shower in it.

Amy Elgersma, Iqaluit’s chief administrative officer, said she believes these compounds stayed in the North Clear well because hydrocarbons are hydrophobic, meaning they “tend” to stay on the surface of the water.

“It’s hard to say exactly how long it would have taken for them to move through the [water treatment] system, but they were really sticking around in that North Clear well,” she said.

The only category of contaminants the graphs show in the reservoir — the last step before water goes into distribution — are the F2 contaminants, which include diesel and kerosene.

These contaminants were not detected in Iqaluit’s water distribution system, said Puglia.

Patterson explained at the Oct. 22 news conference that people can smell fuel in their water even when it’s present at such low levels that it won’t appear in test results, because the contaminants get into the air easily.

“For many people, you will smell it before it presents a health hazard,” Patterson said.

The Department of Health is planning on releasing all of its testing data eventually, although there is no timeline for its release, said Puglia.

So far, it’s not known where all samples have been taken from, which dates they were gathered and when each result came back.

He said the department is working on a way to release the data “in a way that will not cause misinterpretation.”