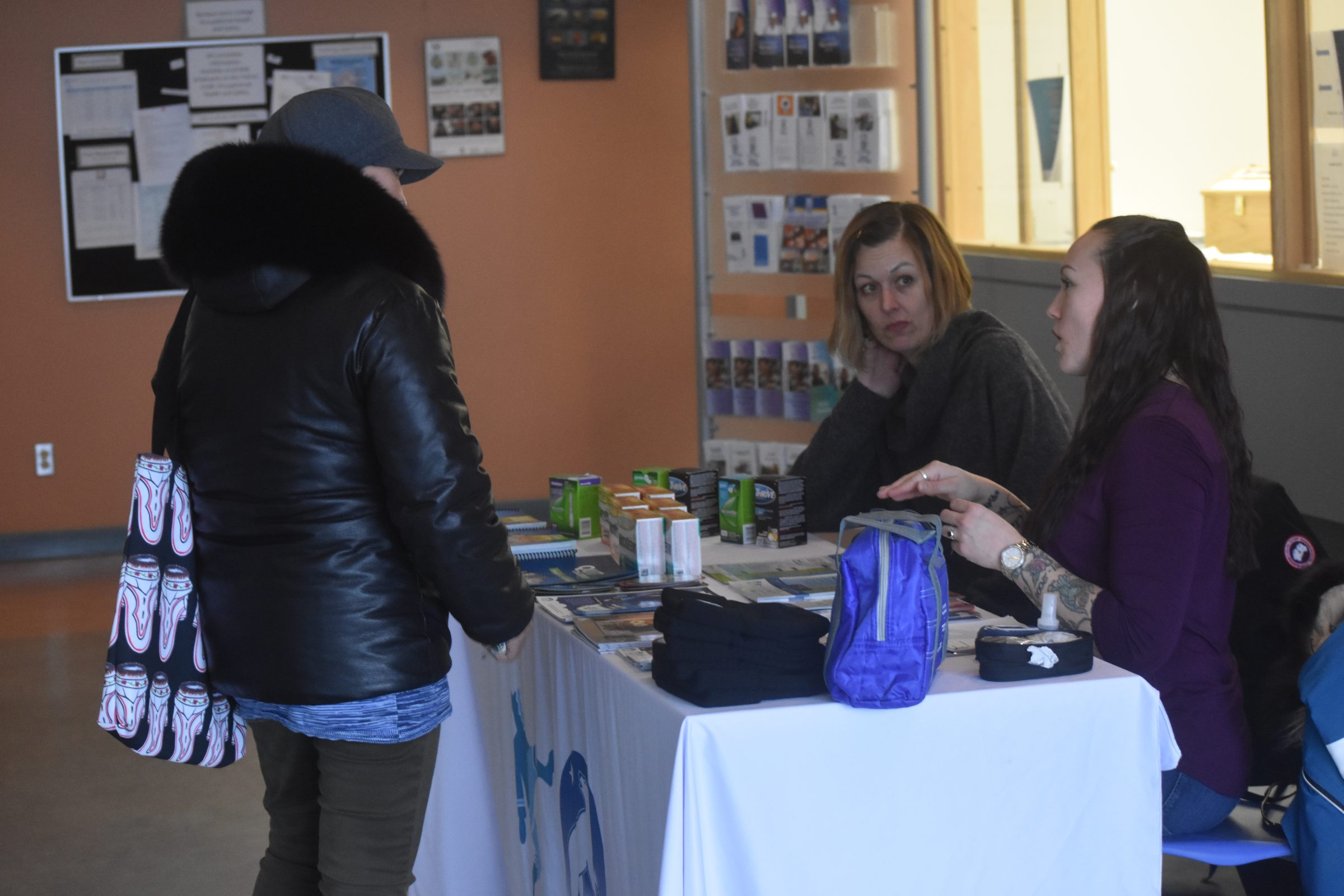 Every other Friday, Nunavut’s Department of Health sets up an information booth in the lobby of the Nunavut Arctic College main campus in Iqaluit. At the booth, staff give out information and products to help smokers quit tobacco. (Photo by Courtney Edgar)

While Tobacco Reduction Month is winding to a close, the Department of Health is continuing to spread awareness about how Nunavummiut can quit tobacco.

Every Friday afternoon throughout the year, health staff set up an information booth at either Nunavut Arctic College or the Tammattaavik Boarding Home. They alternate each week.

There, smokers interested in kicking the habit can pick up information sheets on resources or tips on quitting. They can also get free nicotine-reduction gums and inhalers.

“Typically 15 to 25 people will show up. But every location is different, with a different type of demographic,” said Emily-Ann Aoudla-Henrie, the tobacco program officer at the Department of Health.

She is an ex-smoker who quit this year after smoking cigarettes for 19 years.

She is 28 years old and started smoking at nine.

“I started at an extremely young age. I thought, I can’t do this because my chances of lung cancer are extremely high now. And I want to be a positive role model for my daughter,” said Aoudla-Henrie.

If someone wants to quit, the info booth has free smoking-cessation products so smokers can start the process right away.

However, if someone is just thinking about it, the staff give information on making a plan to quit, why they should quit and where to go for resources or nicotine-replacement products.

“More important than the number of people we see is the fact that we see the same people over and over again,” said Sarah MacRury, a nurse at the information booth at the college on Friday, Jan. 25.

“We might see them one week and they are just interested or just got here. Maybe the next week they will have a sit-down chat with us about what their options are. And maybe they will end up taking some the next week or the time after that.”

MacRury says the fact that they go out in the community regularly, in the same places, makes the topic visible and gives people repeated exposure to thinking about quitting or reducing tobacco use.

“The thing is to not be shameful about it, to be encouraging,” she says.

“So you tried and didn’t succeed, but you learn something new each time you try. And our message is just always keep trying.”

Also a recent ex-smoker, MacRury is just over 80 days tobacco-free.

Getting nicotine replacement for free

All Nunavut Inuit can go to any pharmacy in the territory and ask the pharmacist for two weeks of free nicotine-replacement products.

The pharmacist will first ask a couple of questions about how much they smoke, to find out which product is best.

That could be gum, lozenges, inhalers or an under-the-tongue spray with different doses.

When it comes to any non-Inuit looking to quit smoking in Nunavut, they can also get free products, but only at the public health office or medical centre.

“There is a walk-in cessation program,” said MacRury.

“In Iqaluit, anyone can just walk in to Public Health and say I want to speak to a nurse about smoking cessation. Because these are considered medications, they have to be dispensed by a licensed health-care professional. I think in the communities, you might have to make an appointment.”

Otherwise, non-Inuit can buy them at full price from a pharmacy’s shelf.

“The pharmacies are still selling them so some people don’t know they can get them locally for free at Public Health,” said MacRury.

“Basically, anywhere you go in Nunavut, you can get them free of charge. It is just a matter of knowing where to go. That is part of the message we are trying to get out.”

Additionally, the Department of Health is launching a support group for people who are trying to quit tobacco.

It’s Time Smoking Cessation Group will be meeting twice a week for two hours during the evening.

While the plan is in the works for the near future, a start date has not yet been confirmed, said Kristy Ste Marie, the tobacco reduction program manager at the Department of Health.

There are at least 15 participants so far, according to Aoudla-Henrie. But they are looking for more people to join.

This group will use an Inuit-specific toolkit that was developed by the Canadian Association for Mental Health and Inuit Tapiriit Kanatami, said Aoudla-Henrie.

This is just the beginning of smoking cessation support groups across Nunavut.

“Seven other communities across the territory are also working toward starting their own,” said Ste Marie.