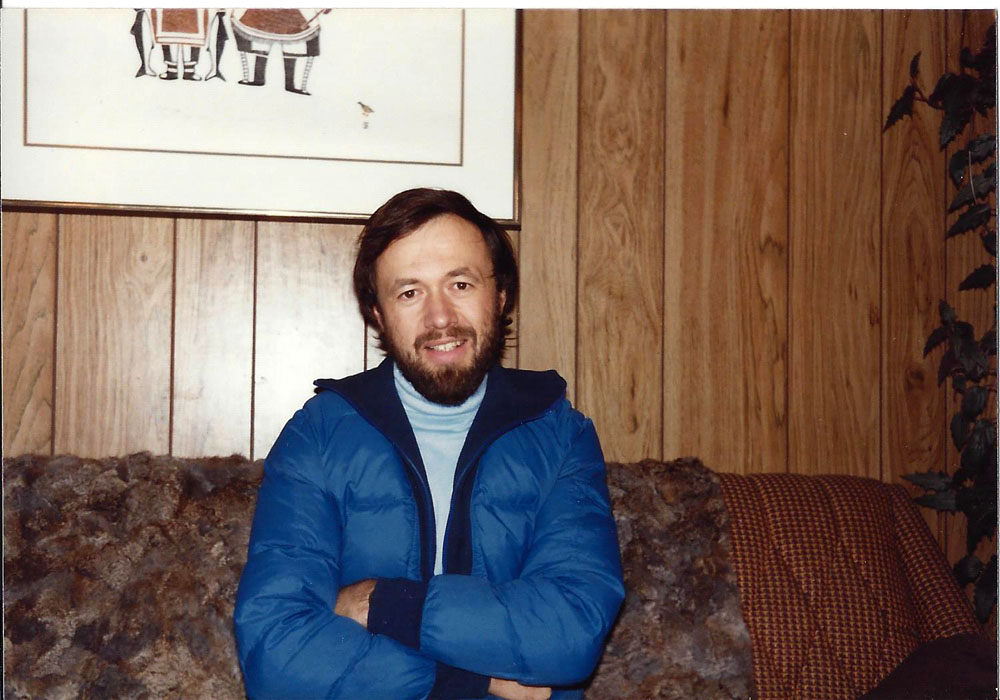 Terry Pearce in a photo taken in Hall Beach during the 1970s. The photographer, filmmaker, cameraman, editor and northern traveller was born on Dec. 30, 1939, in Stoke-on-Trent, Staffordshire, England. He died on June 9, 2019, of complications from Alzheimer’s in Banff, Alberta, aged 79. (Photo courtesy of Catherine Moore)

John Terence “Terry” Pearce’s adventures and curious nature to explore most likely started with the gift of a tricycle at the age of three from his beloved grandparents.

Demonstrating from that early age his physical endurance and self-sufficiency, he would travel by bicycle, boat, dog team, cross-country skis and on foot to far-flung places in northern England and Scotland, Svalbard, Tasmania, New Zealand, the Canadian Arctic and the Rocky Mountains. 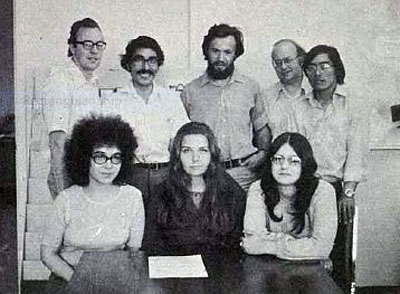 Terry Pearce, the bearded man in the middle of the back row in this photo, stands with the staff of Inuit Tapirisat of Canada, now called Inuit Tapiriit Kanatami, in 1971. Inuit leader Tagak Curley, with moustache and glasses, stands on Terry’s right. (Photo courtesy of Catherine Moore)

Terry, born in Stoke-on-Trent, Staffordshire, England, was drawn to the natural world and took solace in its beauty and ever-changing vistas. He sought places not travelled by many with his cameras and his backpack.

Terry studied photography in England at Brighton Art College and later at the London School of Film.

Growing up, he was a member of a local cycling club and lived for weekends so he could cycle into Wales, the Scottish Highlands and throughout England, especially to Cornwall. In his late teens, he started climbing in Wales with the British Mountaineering Club.

In 1963, Terry did an extensive solo trip to Spitzbergen to photograph and write about the Russian coal mines on this remote Arctic Island. Having been refused permission to officially visit the mine site of Pyramiden, he decided to hitchhike from his parents’ home of Stoke-on-Trent, north to Thurso, Scotland, and then on to Norwegian fishing and sealing vessels north to Longyearbyen and walked to the Soviet mine site.

Coming down a mountainous slope into the mining community, he was greeted by the mine manager, who had figured out who this lone traveller would be.

Terry had written several times trying to gain official permission to visit, but after multiple rejections, he decided that an overland solo traveller would not be turned away. He was right.

Terry’s career as a freelance photojournalist and traveller was lengthy and varied. He worked freelance in London with articles published in Fleet Street newspapers.

When the London Illustrated News wanted him to travel to Lebanon in the spring of 1967 as a war photographer and correspondent, he knew this type of assignment wasn’t for him. Terry immigrated to Canada in 1968, arriving in Ottawa.

He arrived broke, but determined that he could make his way. While couch surfing in Ottawa and making daily visits to the National Film Board looking for work, he convinced the manager of the stills division to give him a photo assignment contract. It was to Arviat.

The assignment paid for photographs, but not for transportation nor meals. He hitchhiked from Ottawa to Winnipeg, convinced Calm Air to fly him to Churchill for free, and travelled with an Inuit family by dog team from Churchill to Arviat. 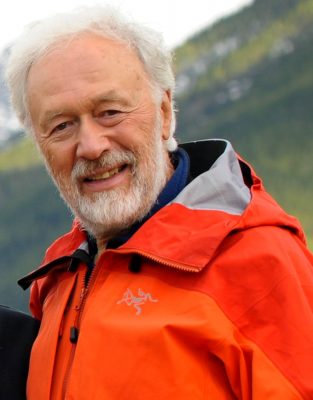 Terry travelled extensively throughout the North and made many friends with his easy manner, friendly smile and willingness to learn about people and how they lived. He hitchhiked twice from Ottawa to Dawson City for contract work. Photos of Terry’s early works with the stills division of the National Film Board are in the National Archives of Canada.

Terry worked for a field season taking photos of Ian Stirling, R.H. Russell and the other biologists studying polar bears in the Churchill and the Hudson Bay area. Stuck at the field camp after his work was done and unwilling to wait five weeks for a helicopter to arrive, he walked for 30 hours straight back to Churchill carrying all his equipment, constantly within sight of polar bears, with only bear bangers to deter them.

His first full-time employment was as a video consultant and trainer with the newly formed Inuit Tapirisat of Canada in Ottawa in 1971.

One of the organization’s first goals was the preservation and promotion of Inuit language and culture. He worked with William Tagoona, Eric Tagoona and Joanasie Salomonie to set up this division.

Communication throughout the vast northern territory was through video and Inuktitut news publications. His photographs were published in Inuktitut magazine.

In 1973, he moved to the small community of Hall Beach, where he ran a team of 18 to 21 dogs for over seven years and would travel for weeks at a time, learning the surrounding land and photographing a changing northern culture.

His first son Jason (1973) and daughter Rita (1976) were born in Hall Beach. He wrote a column called “Hall Beach Notes” published in the Inukshuk newspaper, the forerunner of Nunatsiaq News.

Terry was one of the first northern Super 8 film producers. While battling brutally cold temperature and brittle film, he produced a short colour film on hunting in Fox Basin in 1975.

In 1976, working with anthropologist Bernard Saladin d’Anglure, Terry was the cameraman and editor of the film, “Igloolik, Notre Terre,” an ethnographic film. In 1977, he worked with Ed Folger on the feature-length film “Nanook Taxi” in Iqaluit.

His freelance assignments included documenting people and the ways of northern community life, but most often he photographed wildlife. In 1988, he was involved in an underwater filming shoot of bowhead whales in Isabella Bay for the BBC.

Terry covered many special occasions and was assigned as a photographer twice for visits of Queen Elizabeth II to the eastern Arctic, various governor generals, prime ministers of Canada, and visiting dignitaries.

He was the only freelance photographer on the S.S. Manhattan, the first icebreaker to cross the Northwest Passage in 1969.

Terry was hired by the Nunavut Implementation Commission to photograph the historic moments of the signing of the official documents creating the Nunavut Territory as a new political jurisdiction in Canada on April 1, 1999. 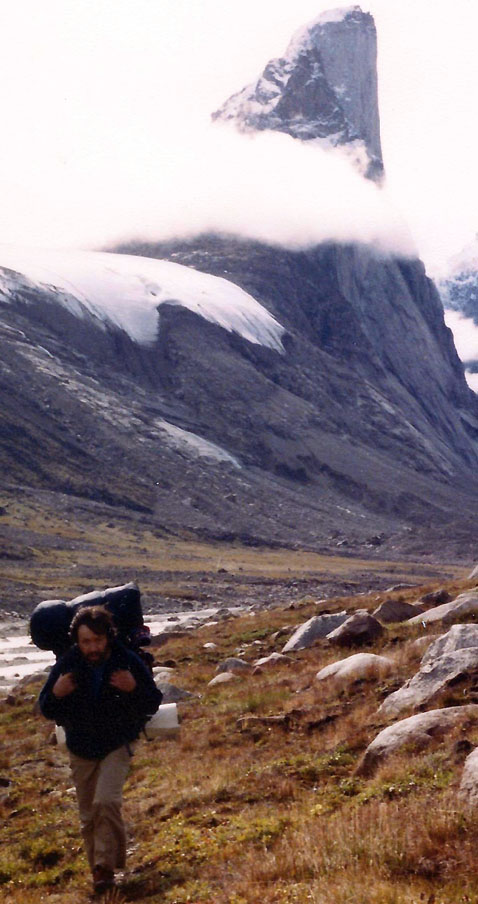 In 1981, he met Catherine Moore in Iqaluit through mutual friends. She was the community adult educator and she asked him if he would be willing to teach an evening photography course.

That was the start of a 38-year partnership. Their son Galen was born in Iqaluit in 1995.

In July 1983, Terry was forced to exit his flipped kayak in Frobisher Bay and swim to shore in freezing waters. His rectal temperature was 32 degrees when he was assessed at the hospital.

However, he was fully conscious, rational and shivering. He stayed overnight in the hospital and upon discharge went back along the shoreline to retrieve his kayak and paddle. The next day he bought a better life jacket!

In 1985, he wrote, directed and produced the film “Between the Two of Us,” for the Department of Education of the Government of the Northwest Territories.

In the 1990s, Terry returned to freelance work in Iqaluit. He was a keen cross-country skier, hiker and kayaker. In 1999, the family moved to Yellowknife for two and a half years to see a different part of the North.

In 2002, Terry, Catherine and Galen moved to Canmore, Alta. Terry retired from his freelance work in 2004 and pursued his love of the mountains and all that the great community of Canmore has to offer an outdoor enthusiast.

In early 2011, Terry was diagnosed with Alzheimer’s. Ian Murray became Terry’s active companion and buddy. They skied, hiked and biked throughout the Bow Valley and Kananaskis country together for many years and Ian continued to take Terry out on walks along the Bow River when Terry became a long-term care resident in Calgary and later in Banff.

Terry was a bright, curious, hardworking, self-reliant, generous and kind person. He was always up for any adventure.

Terry passed away on June 9, 2019. He was surrounded by many from Canmore and by northern friends who helped to expand his diminishing social world and we are very grateful.

A private family interment was held on June 14, 2019, in Canmore. A celebration of Terry’s life will be held in Iqaluit in early September.