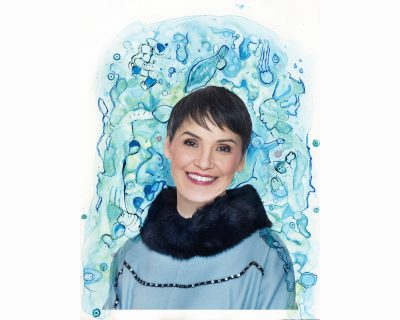 A fourth Juno award might be the sweetest one yet for Susan Aglukark.

The Inuk singer-songwriter will be honoured Saturday at the opening night ceremony for the 51st annual Juno Awards in Toronto. She will be presented with the 2022 Humanitarian Award, given by Music Canada.

Aglukark, 55, is being recognized for her work creating the Arctic Rose Foundation, which has helped countless Inuit, First Nations and Métis youth navigate their wellness through Indigenous-led, arts-based and culturally grounded after-school programs since 2012.

It was November when Aglukark, already a three-time Juno award winner, got a call from the CEO of the organization, telling her she would be receiving the award. Previous recipients include Neil Young, Sarah McLachlan and Bryan Adams.

“The Arctic Rose Foundation is the charity I founded, but leading up to that was other work with other Indigenous organizations in a volunteer capacity.

“But with the Arctic Rose Foundation itself, we are in three communities currently in Nunavut. Our reach is going to be as far as we can go — in First Nations, Inuit and Métis communities with partnerships.”

The inspiration to start the foundation, she said, essentially came from her own journey to heal as well as a fortunate series of events.

“I have lived a pretty awesome life,” she said. “I had left to pursue a life as an artist and through a series of happenstances — being in the right place at the right time — opportunities came along.”

Those first early years were almost always scary, Aglukark said, but she didn’t let that discourage her from moving forward.

In 2018, Aglukark testified at a hearing of the Missing and Murdered Indigenous Women and Girls commission that she had been sexually assaulted as a young girl. She named the man she said had assaulted her, though he was never prosecuted.

“What I learned in the early years was that I had, more than anything, an opportunity to start to heal whatever was holding me back,” she said.

“So, later on in my career and in my life, when I knew I was as healed as I was going to get … I wanted to share some of the things that allowed me to get there, that were my healing steps. And so the best way to do that was through programs, and the best way to offer programs is — was — as I learned, through a foundation arrangement, through a charity setup.”

Finally after putting in hard work to get the foundation off the ground, Aglukark was able to secure charitable status for the Arctic Rose Foundation in 2016.

And the charity is more important now than ever, she said, especially during a time when Canada is aware of the challenges Indigenous people face — high suicide rates, the housing crisis, a food crisis — but not much change is happening.

“What it means is most importantly as Indigenous people that there are clearly a lot of great people doing work for us by us, and this is one of the things I am most proud of, is the Arctic Rose Foundation is Inuit — Inuit artists for Inuit communities.”

Among the programs offered through the Arctic Rose Foundation is the Messy Book program — a daily after-school art program for children and youths in Grades 5 through 12 that offers a safe space, emotional outlet and access to Indigenous artists, role models and mentorship.

There’s also the Youth Leadership Development and Training program, where leadership training, job skills and sustainable opportunities for high school students and local artists are offered within their own communities.

And there’s the Kamajiit (Caretakers) program, designed to tackle the root causes of high-school dropout rates in three Nunavut communities.

Aglukark, who hails from Arviat, first became known for her hits, such as O Siem from her fourth album This Child, which reached number one in 1995 on the Canadian country and adult contemporary charts.

That same year she also became the first Inuk performer to win a Juno award when she won for best new solo artist and best music of Aboriginal Canada recording for her album, also titled Arctic Rose.

She is also the recipient of a Governor General’s Performing Arts Award for Lifetime Artistic Achievement in 2016, was named an Officer of the Order in Canada in 2005, and has performed for Queen Elizabeth, several prime ministers and former South African president Nelson Mandela.