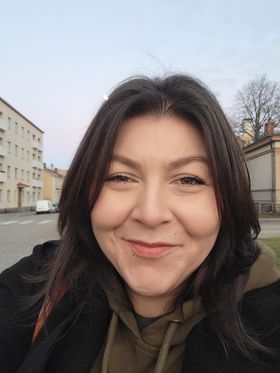 Multidisciplinary artist Niap will perform at the National Arts Centre in Ottawa from Oct. 26 to 29 in “Aalaapi,” a radio drama and play about the lives of several Inuit women in Nunavik. (Photo courtesy of Niap/Nancy Saunders)

Kuujjuaq artist Niap has established herself in drawing, painting and sculpture, but she’s never acted in front of an audience before.

“I wasn’t sure that being on stage was something I wanted to do,” she said.

That will all change Wednesday when Niap, whose real name is Nancy Saunders, makes her onstage debut in Aalaapi | ᐋᓛᐱ at the National Arts Centre in Ottawa.

Aalaapi, which means “keeping quiet to hear something beautiful” in Inuktitut, is a multiformat play set in Nunavik.

Part radio documentary and part theatrical performance, the show features the voices of five young Inuit women from Nunavik talking about their daily lives, accompanied by the onstage performances of Niap and Olivia Ikey Duncan.

Niap and Duncan play characters who share a cabin in a small village in Nunavik. They listen to the radio, which plays music, local news and a documentary based on the stories of the five Inuit women.

Images scroll across the facade of the house, which serves as a screen, merging with the audio narratives to create a scene of a remote Nunavik community.

The pair interviewed five Inuit women about their lives and dreams, weaving their voices together to create an audiovisual performance.

“It was a beautiful way to bring the North to the south and have these girls [tell] their story, their ambitions and their culture and their pride,” Niap said.

“We’re in the same country but very, very disconnected in the way that nobody really knows what’s going on in the North and our problems and our issues.”

Creating a space to showcase the voices of these women helps to bridge that cultural divide, she said. While Niap and Duncan may be the ones physically on stage, it’s the voices of the women on the radio that really centre the story.

In addition to being a multilingual performance (the show is performed in Inuktitut, French and English), Niap said it’s also a “multisensory” experience.

At one point, she stands on stage making bannock in real time, the smell of the bread wafting through the air in the theatre.

Niap initially was only going to take on an assistant designer role, but she was asked by the directors to also be part of the performance after they saw how engaged she was with the material.

“It’s a very unexpected experience for me, [but] I love it very much. This play has a very special place in my heart,” Niap said.

“If you don’t know anything about Inuit, you’ll enjoy it, definitely. But if you do know a lot about Inuit, the reality is … it’ll hit you differently than someone who is just kind of curious.”

Aalaapi | ᐋᓛᐱ— will be performed at the National Arts Centre in Ottawa from Wednesday through Saturday this week for four shows, before moving to Montreal for a run in November.