“People can call me even as I’m heading home.” 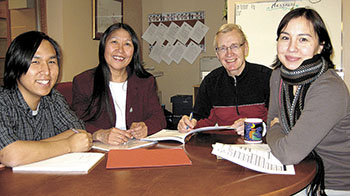 Nunavut’s new language commissioner Alexina Kublu gets down to business with her staff during her first week in office. From left: Judah Atagoyuk, Alexina, David Shadbolt and Sandra Inutiq. (PHOTO BY JOHN BIRD)

The job of Nunavut’s official language commissioner Alexina Kublu gets bigger July 1 when some sections of the territory’s new Inuit Language Protection Act come into force.

As of July 1, Kublu will be able to accept oral complaints about language-related issues from Nunavummiut and take action on them, if she decides they merit a follow-up.

“Now people can call me even as I am heading home after 5 p.m. and they come upon me in the Northmart, or if I’m seeing people off and they’re passing through on their way to the communities and they see me at the airport, they can raise language rights issues to me,” she said.

Based on a complaint, Kublu can start an investigation.

And she can even take on independent investigations before anyone else raises a concern— but she will have to be “above board and consistent” with respect to all investigations, she said.

Complaints and enforcement can also go through the court system.

But Kublu said the new language protection law, which allows for mediation, is based on the principles of discussion and co-operation.

“There is no ‘I am the language commissioner and this is what I say,’” she said.

Some parts of the law, such as those dealing with the expanded role of the official languages commissioner and the right to education in Inuktitut from kindergarten to Grade 3, take effect July 1.

But it will take years to implement the new law designed to promote and protect Inuktitut in Nunavut.

For the moment, Kublu said she’ll mainly concentrate on building up public awareness of the new law, speaking to Nunavut about its impact on their rights and obligations.

“The most important right to remember is that they can have services in their language of choice,” she said.

That is, “if there is a significant demand.”

This means a francophone in Whale Cove may not get personal service in his or her language, although an Inuktitut-speaker in the same community can expect to be served in Inuktitut.

How the Government of Nunavut intends to implement the language protection law won’t be clear until March 2010, when the GN tables its plan in the legislature, although there’s $8.6 million in this year’s budget to start implementing the Education Act, the Official Languages Act and the Inuit Languages Protection Act.

Between now and March, Kublu plans to look at the various GN departments that supply face-to-face services, to work with the municipalities, which will be required to supply Inuktitut-language services, and to inform the private sector about the parts of the new law which may affect them.

Kublu said she recently went booth to booth at the Nunavut trade fair, telling businesses there that they would have to offer services in Inuktitut.

“You’re going to have to prepare” was her message although what she heard is that businesses can’t retain Inuktitut-speaking staff because they all go to the GN.