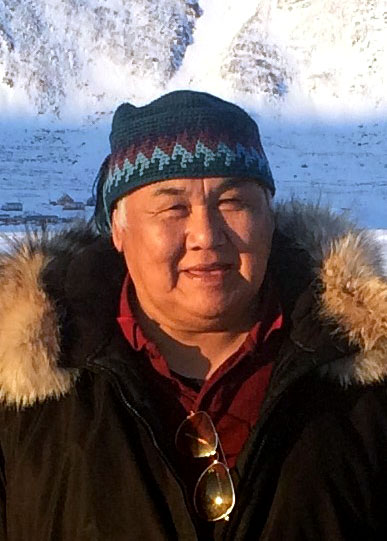 Larry Audlaluk, pictured here, writes about his family’s forced relocation to the High Arctic in his book, What I Remember, What I know: The Life of a High Arctic Exile. (Photo courtesy of Inhabit Media)

Larry Audlaluk describes himself as an avid reader.

“I’ve always been very interested in history, any kind of history, about anybody from anywhere,” he says.

But throughout his reading, Audlaluk realized there was a story missing from the pages of Canada’s history book: his own.

The Order of Canada recipient and longest-living resident of Grise Fiord was one of more than 90 Inuit taken from Inukjuak by the federal government and dropped off 2,000 kilometres away in the High Arctic in the 1950s.

“I said to myself, I have to write a memoir, the story of my life. As I’ve gotten older, I realized who I am, why I’m up here, where we come from and where we are now,” he told Nunatsiaq News, speaking over the phone from Grise Fiord.

“When I look at the big picture, we’re actually part of a chapter of Canadian history that the [federal] government doesn’t really want people to know about. I thought, here’s an opportunity to tell a story about the relocation. And my own take on it from my side.”

So he did. His memoir, which will be released later this year, is titled What I Remember, What I Know: The Life of a High Arctic Exile. It tells the story of his family’s forced relocation and the pain, loss, and healing that followed. 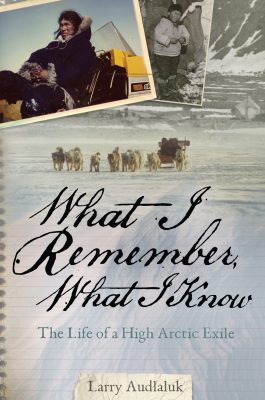 Larry Audlaluk’s book, What I Remember, What I Know, pictured here, will be published by Inhabit Media in October. (Photo courtesy of Inhabit Media.

As a community leader, Audlaluk has shared this story many times publicly, but has wanted to document his family’s experience for a long time. He started working on the book with editors at Inhabit Media two years ago.

“I started writing it by hand quite a few years ago,” he said.

Audlaluk was two years old in 1953 when an RCMP officer came to Uugaqsiuvik, 35 kilometres west of Inukjuak, and asked his family to move to the High Arctic. That officer returned “again and again, until people didn’t know what to do other than agree,” Audlaluk writes in his book.

At the end of July in 1953, the CGS C.D. Howe arrived to take the families to the High Arctic.

“Forty years later, my brother Samwillie recounted the departure at a hearing in Ottawa: ‘I remember, there were waves—they were waving each other goodbye, with tears streaming down their faces. ‘Cousin, I am going to see you again. I will return.’ And there were many people saying that as the ship was departing.’ But many of us never came back,” he writes.

The families on board the C.D. Howe were told they would be settled close to their relatives.

But as Audlaluk recounts, this was not the case.

“It was only once the C.D. Howe was halfway to Craig Harbour from Pond Inlet that the families discovered they would be sent to three different places,” Audlaluk writes.

Those three places were Craig Harbour and Alexandra Fiord on Ellesmere Island and Resolute Bay on Cornwallis Island.

As Audlaluk recounts in his book, it was only later that he discovered the reason why his family was exiled to the High Arctic, which, as Audlaluk’s writes, was to protect Canadian sovereignty in the Arctic.

“They would not say, ‘We put them there for sovereignty reasons, to keep out foreigners from the area at the time.’ They never talked about that. My book was to point that out and for Canadians to realize how big our role was. Grise Fiord and Resolute are important Canadian communities that most Canadians should not take for granted,” Audlaluk said.

“What the government did to us isn’t right, the way they started those communities. They didn’t tell us the real truth. And that putting us up here would be very dangerous,” Audlaluk said.

The book follows Audlaluk’s life from a child growing up in an outpost camp to his current life in Grise Fiord. He describes his family’s constant fight to return home, his tuberculosis diagnosis, and the death of his father just 10 months after being relocated.

“We were not accorded our equal rights for a long time.… Those kind of violations, the human aspect of it, it was sad, very sad. I want Canadians to know about that,” he said.

“It’s a story of the death of family, of fear, hurt, abandonment, and yet how the human spirit is strong. We survived. We lived. Most of us, we survived up here. There is always hope and light at the end of the tunnel,” Audlaluk said.

“Don’t be idle. I’ve had a hard life but I survived. You can survive too.”

What I Remember, What I know: The Life of a High Arctic Exile will be available this October.