Learning from the land at Nuna School

“They’re getting to know each other as classmates. They’re not separated by desks and tables” 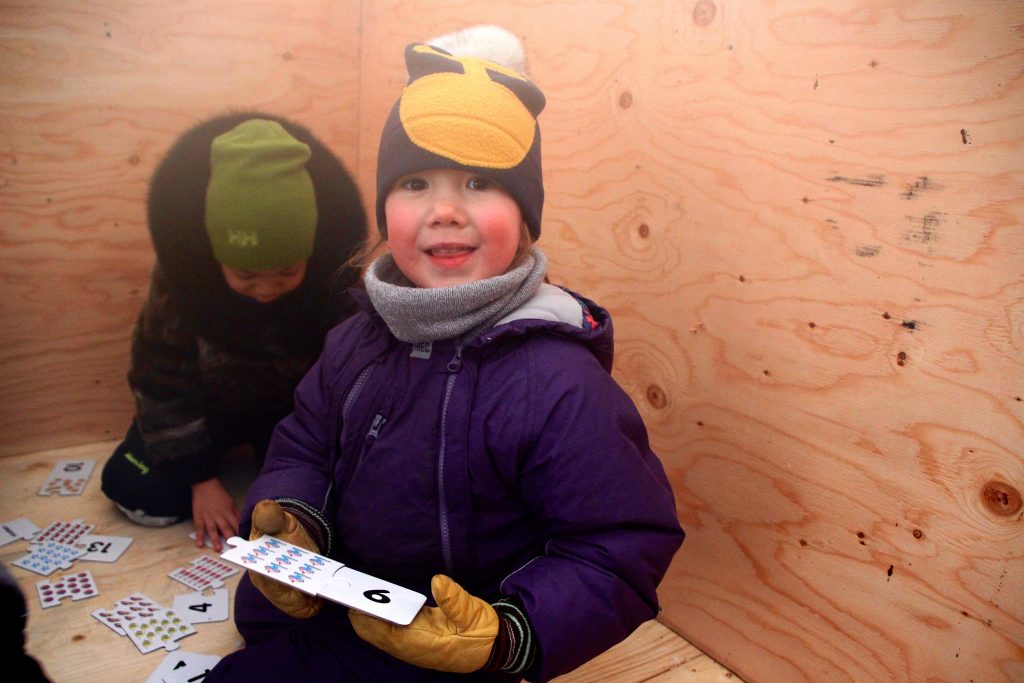 Vivi Morrison Mike, 5, is having a great time learning from her math matching game at the Nuna School tupiq in Apex, on Wednesday, Dec. 5. (PHOTO BY BETH BROWN)

There are three rows of three cherry sundaes on the puzzle piece in Vivi Morrison Mike’s mitted hand.

“Three plus three is?” she’s asked by her kindergarten teacher, Breanne Card.

“And three more is?”

Cups of cocoa might be better counting tools than sundaes today, since Morrison Mike is bundled in a snowsuit for this math lesson. That’s because, as a senior kindergarten student at Nanook School in Apex, she doesn’t study all of her subjects in a typical classroom.

She’s huddled with her classmates in a heated tent—or tupiq in Inuktitut—set up in the elementary school’s playground. The students are finishing their lessons in the warm space before hitting up the swing set at recess, but the bulk of their morning is spent on the hillside behind the blue and green schoolhouse, where instead of learning at Nanook School, they learn at Nuna School.

This fall, Nanook School launched a land-based-learning program, where teachers are proving that young students in Nunavut can meet and even exceed required curriculum while learning outdoors.

Or, while playing out, as Nunavummiut call it. “You have to catch the teachable moment,” said Card, who dreamed up the outdoor school with fellow teacher Maggie Kuniliusie. “You have to have an eye to see it and know how to facilitate it.”

Kuniliusie, who teaches Grade 1 and Grade 2, and Card, who teaches junior and senior kindergarten, share a passion for on-the-land learning.

Kuniliusie, a Nanook School educator of over 20 years, has always made strides teaching Inuit culture to her students by taking them snowshoeing or along tundra and tidal hikes. Originally from Qikiqtarjuaq, Kuniliusie has a masters of education from the University of Prince Edward Island.

“She’s my mentor,” said Card, a Memorial University graduate herself, who has been studying outdoor education for over 10 years. Card began teaching in Apex in 2017.

With the support of school language specialist Kootoo Alainga and counsellor Maata Peters, the teachers can teach a bilingual curriculum in English and Inuktitut for children in junior kindergarten through to Grade 2, covering math, science, music, art, drama and phys-ed—all while playing outdoors.

When Nunatsiaq News visited Nuna School on Dec. 5, students were learning to make shelters with planks of plywood they carried together to prop up on rocks. They talked about the importance of shelter on the land and sang a song about animal habitats.

Besides science, the exercise was teaching teamwork and coordination. The first time the kindergartners made shelters, they were tripping over the tundra trying to carry an awkward board as a group, Card said. Today, they look like they know exactly what they’re doing.

“It makes sense,” said long-time principal Mat Knickelbein. “We can meet the outcomes of the Department of Education curriculum guides (outside)—we’ve proven that we can do that, instead of sitting in four walls in a classroom at a desk, which doesn’t meet the needs of all our students by a long shot.”

Knickelbein has seen a noticeable difference in student behaviour since Nuna School opened this fall. Students are academically engaged. They don’t often argue or talk negatively, and staff have even seen a drop in easily spread illnesses like the common cold.

“They’re getting to know each other as classmates. They’re not separated by desks and tables,” he said.

This fall, Nuna School students learned about water temperature and freezing points, as the puddles they played in slowly turned to slush and ice. Some days, they make shapes in the snow, learning about triangles and circles and squares. They’ve studied the concept of camouflage, by talking about how little brown lemmings use the tundra to hide from predator owls, and how rabbits change to white in winter to blend in with the snow.

Playing in the snow daily now, Nuna School students also learn how to tell their teachers when they feel cold, and how to ask for what they need to feel warm—like a mitten adjustment or some snow dumped out of their boot.

In Card’s research-speak, that’s called risk assessment and self-advocacy, tools that are as vital for young student development as lessons are from books. So far this year, the Nanook School students have been outside every day except for Halloween and picture day, when their costumes and photo-ready outfits kept them from the outdoors.

And now that the students have a heated tupiq—a mid-fall addition to Nuna School’s programming—they can learn outdoors even on the coldest school days, and have elders visit Nuna School for Inuit Qaujimajatuqangit lessons in lighting qulliqs and breaking bannock.

Today, after recess and a snack, Nuna School kindergarten students like Morrison Mike all file back into their Nanook School classroom. Rosy cheeked and outwardly refreshed, they sit cross-legged on their classroom mat, still chatting about their lessons from the tundra.