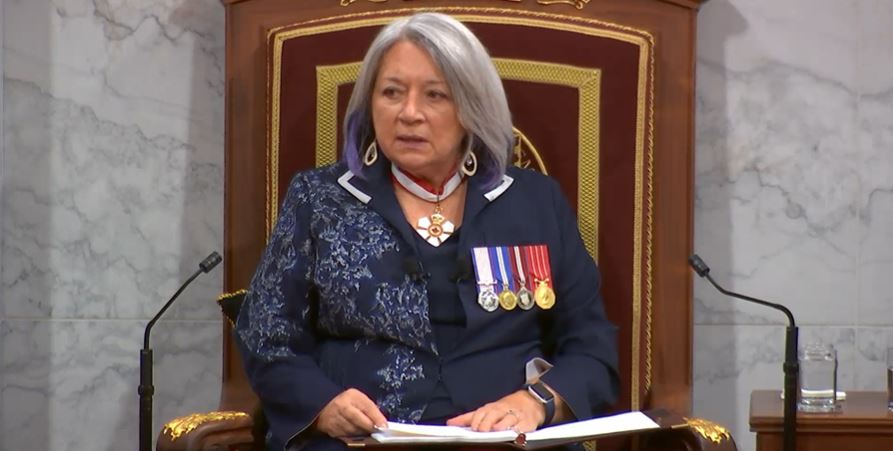 Governor General Mary Simon delivers the speech from the throne on Nov. 23 at the Senate chamber in Ottawa. (Screenshot courtesy of Senate ParlVU).

The federal Liberal government promised a new child care agreement with Nunavut and support for Indigenous-led mental health initiatives, when Gov. Gen. Mary Simon read the speech from the throne Tuesday in the Senate.

It was the first time the speech, which outlines the government’s agenda at the start of a parliamentary session, was presented by an Indigenous governor general. Simon’s arrival in the Senate, which has been temporarily moved to a restored building that once housed Ottawa’s train station, featured the pageantry of a regal event, with elements of her Inuit culture being featured prominently. She and Prime Minister Justin Trudeau entered the chamber to the beat of an Inuit drum, while elder Sally Webster lit a qulliq.

Simon opened her speech in Inuktitut, welcoming the limited-capacity crowd of MPs, senators and other dignitaries.

She then recognized the lives of the children whose bodies were found earlier this year at the sites of former residential schools.

“Despite the profound pain, there is hope,” she said. “Indigenous Peoples are reclaiming our history, stories, culture and language through action.”

Among the throne speech’s promises were commitments to end the COVID-19 pandemic through vaccinations for children, as well as a plan to respond to natural disasters like the ongoing floods in British Columbia. Simon, whose appointment was criticized because she’s not proficient in French, spoke French while presenting the government’s promise to preserve the Official Languages Act.

In addressing housing and child care, Simon mentioned that two provinces and two territories, including Nunavut, have not yet entered agreements with the federal government to create $10-a-day daycare spots.

“Four jurisdictions have not yet reached agreements on childcare,” she said. “Two are territories with unique infrastructure challenges, and the government will keep working together to meet the needs of the North.”

Simon read several Liberal promises on Indigenous reconciliation, including the construction of a national monument to survivors of residential schools, and a commitment to the appointment of a special interlocutor on unmarked burial sites at Indian residential school sites.

She also spoke about the government’s promise to support mental health services in Indigenous communities.

Simon finished the speech calling for unity between parties and offering a sense of hope about Canada’s future.

Nunatsiaq News asked Nunavut’s NDP MP Lori Idlout and Abitibi–Baie-James–Nunavik–Eeyou MP Sylvie Bérubé, a Bloc Québécois member, for their reactions on issues affecting their ridings. Staff from both offices said the members were not available.

Following the speech, Idlout spoke in the House of Commons for the first time since she was elected in September. She expressed joy in hearing Simon speak in Inuktitut for part of her speech. Idlout was one of the dozen MPs inside the Senate to hear the throne speech.

Idlout used her first speech to press the Liberals on the lack of housing across Nunavut.

“Nunavummiut have been seeking help from [the] federal government to build more and better quality housing,” she said. “I would like to know when the Liberal government is going to move from planning to actually funding more housing for Nunavimmiut, for First Nations, Métis and Inuit across Canada.”

Sophie Chatel, the new Liberal MP from Quebec, responded by promising to work with Indigenous communities to resolve the housing and mental health crises.

Nunavut Senator Dennis Patterson attended the throne speech wearing a sealskin vest. In an interview afterward, he said there were some parts of the speech he liked, such as the commitments to a child care agreement and mental health funding.

But Patterson said more needs to be done to provide elder care across Nunavut, and the federal government should invest in building elder facilities and in the training of care staff.

“In Nunavut, we have different needs, and our infrastructure needs include facilities from elders and strategic investments in training, so those elders can be provided the support they need to age in place,” he said.

Nunavut Premier P.J. Akeeagok, less than a week into his own job, said in a statement he was pleased with the emphasis on reconciliation, mental health, housing, infrastructure and affordable child care, and that he hopes his government can work with Trudeau’s government on their mutual objectives.

“These investments are fundamental to addressing Nunavut’s infrastructure and housing gap and will make a significant impact on our territory’s suicide crisis,” he said.

“We are encouraged by the government’s pledge to implement the United Nations Declaration on the Rights of Indigenous Peoples as quickly as possible,” said Rebecca Kudloo, the president of the national Inuit women’s organization. “Pauktuutit looks forward to providing a gender-based analysis plus lens at all discussion tables, as full and equal participants in the federal government’s plan to implement UNDRIP.”