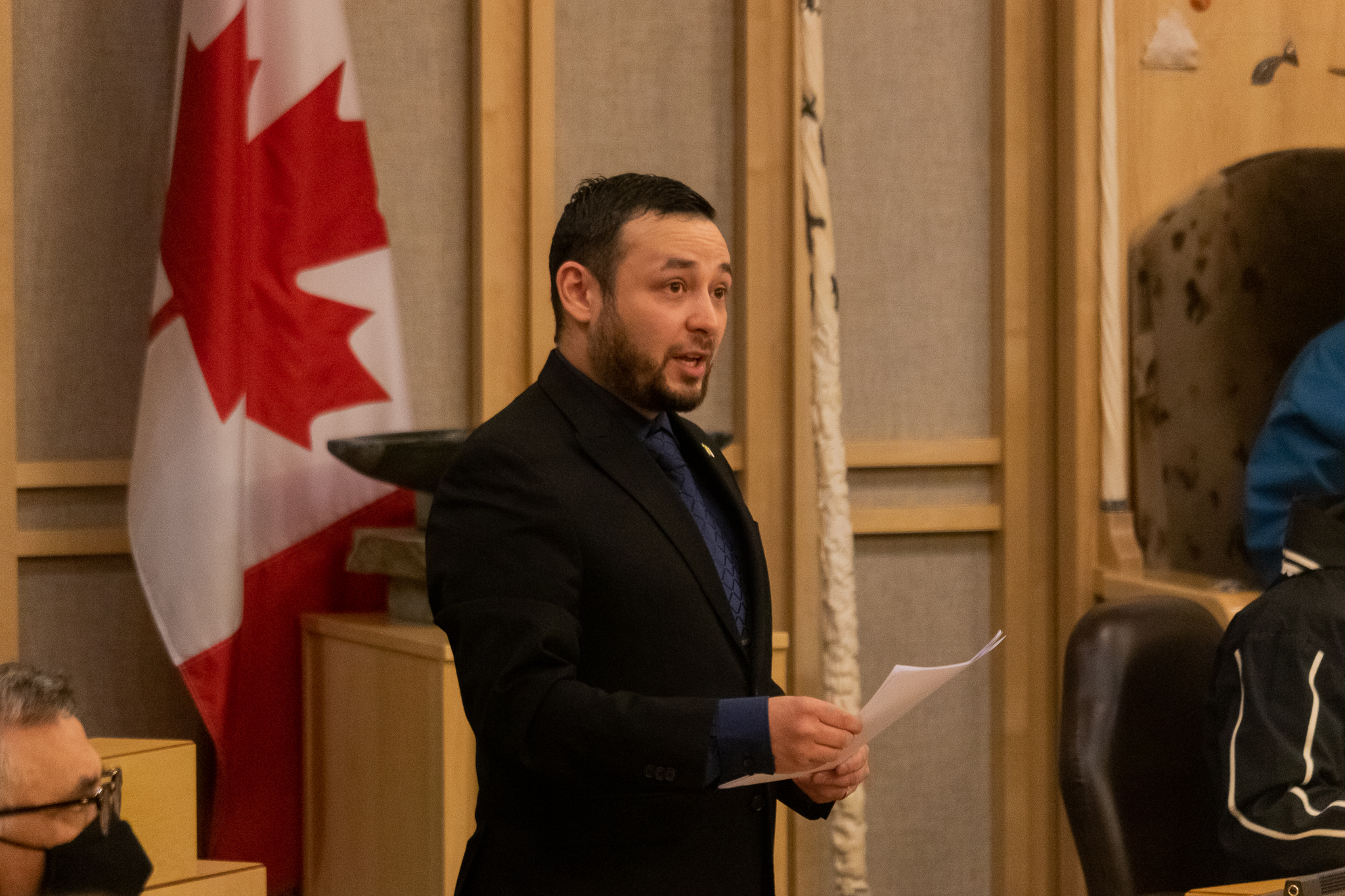 Adam Arreak Lightstone resigned from cabinet Wednesday just before his colleagues in Nunavut’s legislative assembly voted to accept the integrity commissioner’s report into a conflict of interest. (Photo by Jeff Pelletier)

Adam Arreak Lightstone resigned from the legislative assembly’s executive council Wednesday, just before his colleagues unanimously voted to accept a report from the territory’s integrity commissioner that found he had been responsible for a conflict of interest late last year.

Integrity commissioner Katherine Peterson determined there was a conflict of interest in March after Lightstone’s wife, Hilary Burns, was appointed for a short time as an acting deputy minister in one of the departments under his portfolio.

For about five days last December, Burns — who was director of employee relations and job evaluation in the Department of Human Resources — held the department’s second-highest position.

Because Lightstone was not the one to suggest she get the position, and because he showed concerns about the situation, Peterson recommended Lightstone be reprimanded by the legislative assembly and that he publicly acknowledge his conduct.

A GN news release following Peterson’s report said Lightstone was “stepping aside” from his cabinet roles, where he was minister responsible for both human resources and finance, before ultimately offering his resignation in the legislature Wednesday.

“I am resigning from executive council, effective immediately,” Lightstone said in a speech to the legislature, adding he would continue serving as the MLA for Iqaluit-Manirajak.

In his 15-minute speech to the legislature, Lightstone denied being involved in a scandal, but admitted to creating the perception of a conflict of interest. He also apologized to his colleagues and thanked Peterson for conducting a full investigation.

“The fact of the matter is, I did not behave in an unethical fashion,” he said. “I do accept that it was a mistake that I made and one that I fully accept the consequences for.”

Lightstone also used his speech to defend his wife. Without naming anyone, he called out members of the legislature over what he described as a “shameful attack” on her reputation as a public servant.

“After all she has done for our government, members of this legislature have brought her into the public arena and questioned her integrity, as well as mine, in an attempt to discredit me,” he said.

After concluding his remarks, the legislature voted unanimously to adopt the findings of the report before going into a recess.

“It’s the integrity of this assembly that we work in, when policies are clearly broken there’s accountability to it,” said Iqaluit-Tasiluk MLA George Hickes after proceedings wrapped up.

Hickes, along with Arviat South MLA Joe Savikataaq, addressed the conflict of interest issue in the legislature on March 7 during question period.

Following the decision on Lightstone’s reprimand, the MLAs turned their attention to picking his replacement as a cabinet minister.

Simailak described it as “very surreal” to have been selected to join cabinet. He called it a privilege to have served as a regular MLA, and vowed to apply what he learned in that role to his new jobs in cabinet.

“Nunavut is spread out but quite small,” he said, adding he looked forward to making life better for all Nunavummiut.

Correction: This story has been updated to correctly reflect when Adam Arreak Lightstone resigned. It’s also been updated to state that MLA Craig Simailak was voted into cabinet. His portfolios have not been assigned yet.