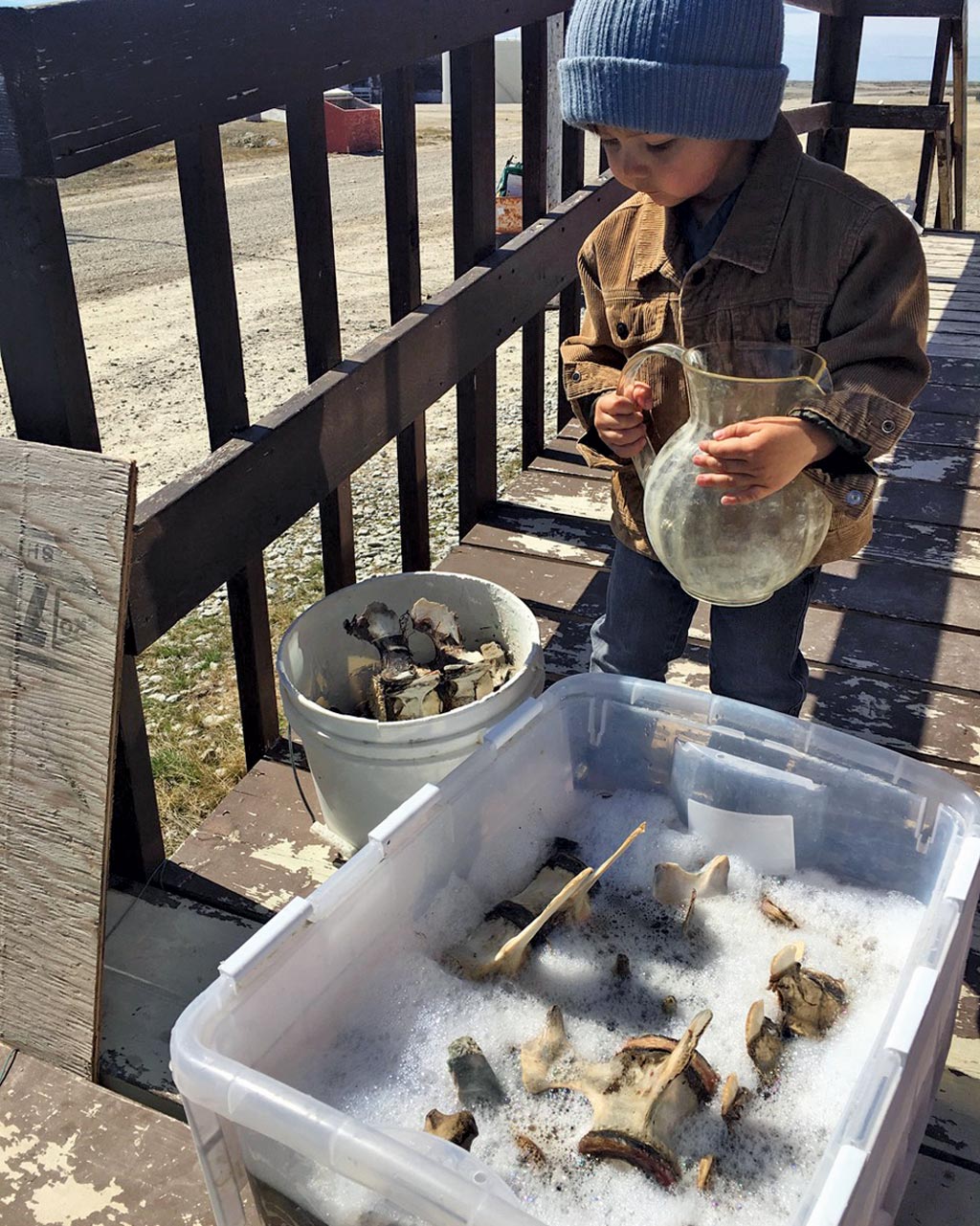 Tarralik Duffy’s son, Bo, helps her collect and clean bones. Here, he’s helping to fill the bin with water, so Duffy can soak the spines to loosen the discs in the first stage of cleaning. (Photo courtesy of Tarralik Duffy)

Confessions of a kid born in Manitoba, raised in the N.W.T. and a proud(ish) Nunavummiut since 1999

We’re celebrating Nunavut’s twentieth birthday by reviewing the territory’s successes and its challenges in areas ranging from music and the visual arts to the economy, the state of Inuktut and climate change. Some notable Nunavummiut have shared with us what the territory means to them and the changes they’d like to see over the next 20 years.

When I was 13 I remember the politicians who started coming around school, interrupting our classes to talk about land claims and the creation of a new territory.

It was the first time I heard the ominous whisperings of a separation from the Northwest Territories turn into a full-blown inclusive conversation.

With the split now seemingly imminent, the visits from political figures became more frequent. There seemed to be an urgency to invite us youth into the discussion, or at the very least to inform us of a historic political and cultural happening.

Looking back, I see that I didn’t pay much attention. I welcomed the interruption with a combination of glee and disdain. Not having to do math, but having to listen to politicians talk was a dismal trade-off. I was all teenage eye rolls and heavy sighs. I recall many of us, at least those of us who sat at the back, saw it as an opportunity to slack off a bit while the politicians did what they do best, talk.

I was arrogant, doubtful and dismissive in my youthful ignorance. Why should I care? I really didn’t. I didn’t like the name; the areas of allotted beneficiary land seemed really small. “Isn’t it all ours anyway?” I thought. “Hasn’t it always been ours?” and “How do they know we aren’t getting ripped off?”

I had little faith in adults, let alone governments. I still wanted us to be N.W.T. I liked the way it sounded, or maybe I was just used to it. I was getting tired of things always changing. In Grade 3 we had to shift to learning a whole new system of measurement—from imperial to metric. We had just finished learning the old system when our teacher told us the metric system made more sense, and it was easier to learn.  Anyhow, we’d get the hang of it right away … and he was right, we did. I still felt duped.

When I sat glumly beside my anaanatsiaq one lunch hour, she told me change was part of life and she had seen waves of change, tsunamis even, that altered her life beautifully and traumatically in turn. She, of course, knew many of the men and women who were painstakingly involved in the planning for the new territory. She had tea with them and had gone to church with them: she had fed, prayed with and encouraged every politician who came to her house. She was exuberant and proud.

It was a monumental event after all, a moment that split everything—our social ties and our land from the N.W.T., the only home I had ever known.

It was like a crack in the ice: as though we were standing on two sides of an aijuraq, the big, black, dark abyss that we had to cross as avid campers and fishers.

The split can seem so wide and too perilous to navigate. I have seen my ataatasiaq and uncles and cousins work tirelessly to pull two sides of the ice together to narrow the gap, so it would be easier for the women and children to cross. They were constantly working to make it less harrowing for the younger, more vulnerable, at that point less capable ones.

Sometimes narrowing the gap was impossible and we’d have to cross on Ski-Doos going full blast. Sometimes a qamutik was long enough to work as a bridge; sometimes we’d have to cross in the little boats my cousins used to retrieve seals from the floe edge. No matter the obstacle, they would find a way to get across. Each of us in tow, holding our collective breath.

This time the proverbial crack was intentional—and we weren’t working to narrow it, but to create a separation that was a long time coming.

When the big day finally came that April in 1999 and I first saw the logo unveiled for the newly formed Government of Nunavut, I hated it. Designed by acclaimed artist Andrew Qapik, a fluid yet-stoic image of a bear contrasted against a blue background pauses mid-climb, to gaze backward toward the North star.

At that point in my life, I was completely immersed in an identity crisis that would bring me to both reject and run from my culture, and the newly formed territory of Nunavut itself, for nearly a decade.

How could you possibly go anywhere staring behind you? Wouldn’t we become stuck in a gaze that constantly pulled us back? Maybe I was too indoctrinated in the Bible. As a child of a fervently pentecostal family, it was hard not to be. The idea of looking back seemed foolish and spoke of an unwillingness to let go, like Lot’s wife who turned into a pillar of salt. Mostly I was just a confused kid.

At that time I had zero pride in my Inukness. I had internalized a lot of racism and shame. It’s an embarrassing cliché, but it took leaving for me to realize the poignancy of that logo and to appreciate what a privilege it was to grow up in the N.W.T./Nunavut during their breakup and all the discussions I was privy to at that time.  Even the ones I reacted to with adolescent annoyance. 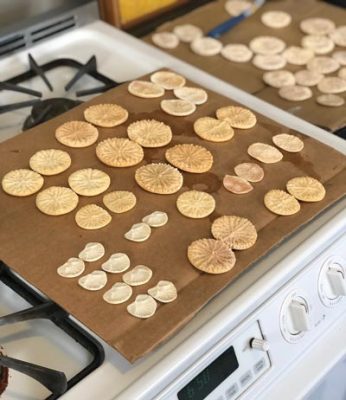 Every available space in the author’s house becomes a place to dry bones, vertebral discs of both beluga and caribou (the heart-shaped ones), to be made into the author’s signature earrings as part of her Ugly Fish business. (Photo courtesy of Tarralik Duffy)

It happened gradually, like standing up for that strange family member who annoys you, but you actually understand and love so deeply: the one you can talk shit about, but no one else can. The further away from home I wandered, the more I became a reluctant, yet passionate ambassador.

All my conversations somehow always led back to my homeland. I found myself answering questions ranging from the innocuous to the insulting (“No, I am not from Alaska. No, we don’t live in igloos. Yes, we have indoor plumbing.”)—or defending our long history of eating foods considered taboo by the western world.

In my unassuming defensiveness that led me to correct people’s misconceptions and ignorance of the North, my home, I unknowingly cultivated a deep sense of pride in my heritage and all the work our ancestors and the founders of Nunavut did to get us here.

Perhaps it had always been there, but as I moved forward, in my own life, I realized looking backward at the richness of our collective past (for better or worse) always helped me to find my footing.

Tarralik Duffy is a multidisciplinary artist and writer who lives and works between Salliq (Coral Harbour), Nunavut and Saskatoon, Sask. From writing, jewellery and apparel to graphic works, Duffy’s creative output shares distinctly Inuit experiences, which are often infused with a dose of humour and pop culture.