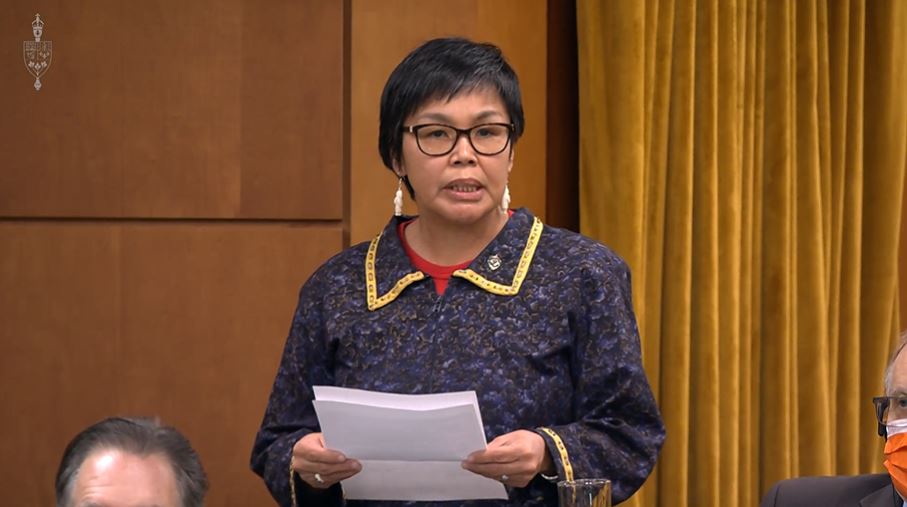 Nunavut MP Lori Idlout took the opportunity to speak Inuktitut in the House of Commons for the first time on Friday, while pressing the Liberals on elder care in Nunavut. (Screenshot from ParlVU)

Nunavut MP Lori Idlout spoke up on elder care while asking her first Inuktitut question in the House of Commons on Friday.

The NDP MP told Nunatsiaq News on Wednesday she was planning on speaking in Inuktitut pending the availability of an interpreter.

In Friday morning’s question period, she asked about the lack of elder care in Nunavut, and asked the Liberal government what it was going to do to help.

“Our elders from Nunavut are being exiled [and] removed from their families, from their homeland and from their communities because they cannot access care in the territory,” she said, speaking in Inuktitut, which was also simultaneously interpreted into English and French. Idlout added there have been “countless” promises made in the House of Commons but “little to no action” to help elders.

“Will the prime minister respect elders and the Indigenous and Northern Affairs Committee, and follow through on accelerating the construction on long term care facilities and seniors homes in Nunavut?” she asked.

Prime Minister Justin Trudeau was not in attendance at question period this morning. According to his daily itinerary, he was meeting with Montreal mayor Valérie Plante, before heading west to visit areas affected by flooding in British Columbia.

Northern Affairs Minister Daniel Vandal responded to Idlout’s question, saying that he would work with her to resolve the issues elders continue to face.

“I am proud that I am the first-ever minister of northern affairs to give the attention to the infrastructure, the housing, the healthcare, the seniors,” he said.

This is not the first time the Liberals could not provide a clear answer to questions surrounding elder care. At his cabinet unveiling in October, Trudeau provided a similar response to Nunatsiaq News.

“We will continue to be there as a partner … with investments in infrastructure, in housing, in support for vulnerable seniors right across the territory, and indeed, across the country,” Trudeau said then.

Idlout tweeted that she was glad she had the opportunity to ask the question in her native language.

“I am proud that I was able to ask a question all in Inuktitut to advocate for elders from Nunavut,” she said.

Since October, groups in Nunavut have been petitioning for more elder support across the territory.