First two grants of $30,000 to be given out next school year at Université du Québec à Montréal 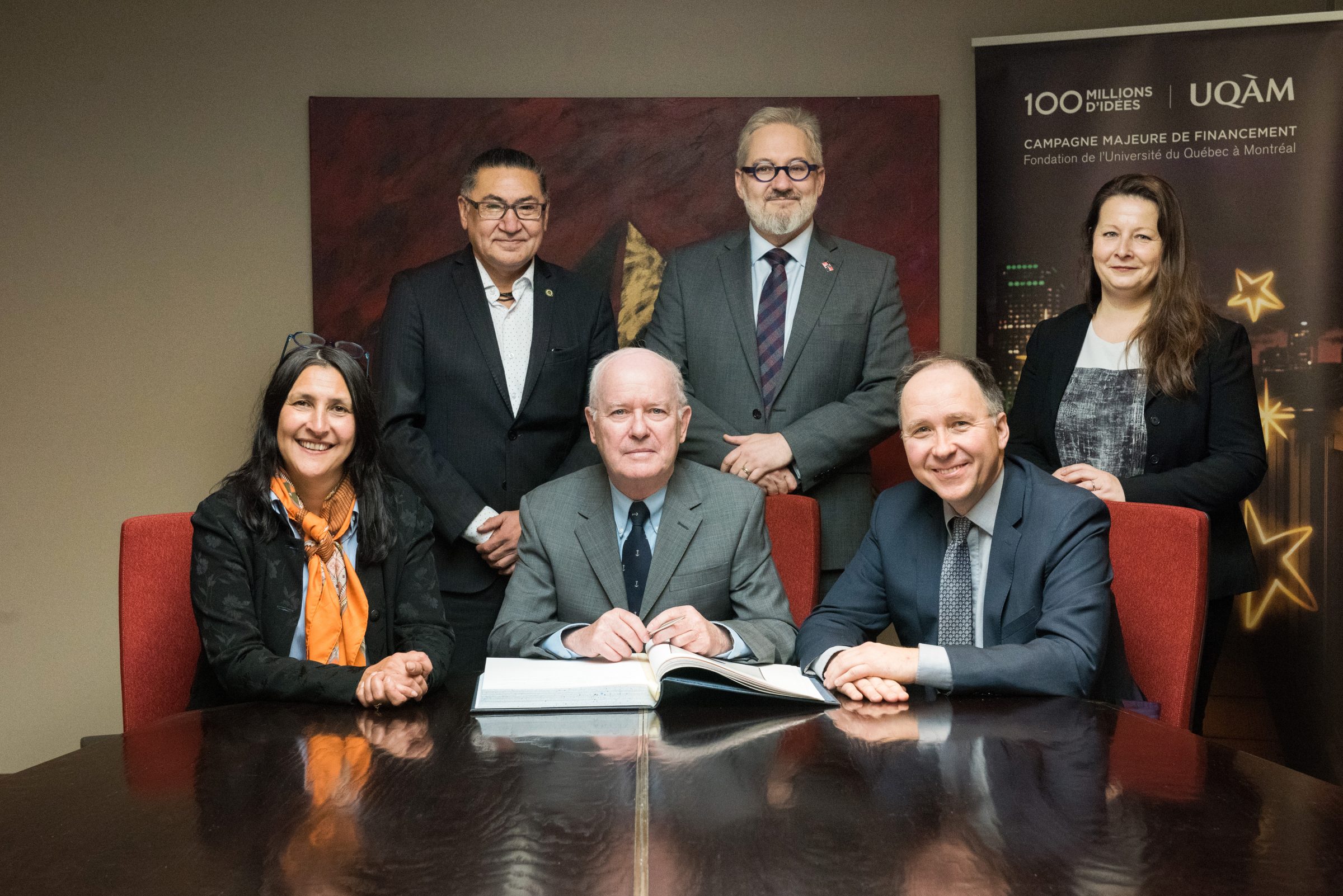 A donation of $1.8 million has created a scholarship for Indigenous law students at the Université du Québec à Montréal. Present for the donation on Dec. 2. were, top row, Roméo Saganash, former federal MP for the riding of Abitibi-James Bay-Nunavik-Eeyou; Hugo Cyr, dean of the faculty of political science and law; and Ingrid Chauvin, philanthropic advisor of the UQAM Foundation. Bottom row: Magda Fusaro, UQAM rector; Paul D. Leblanc, donor; and Pierre Bélanger, director general of the UQAM Foundation. (Photo by Nathalie St-Pierre)

A $1.8-million donation will establish a scholarship for Indigenous students to study law at the Université du Québec à Montréal.

The donation was made by Paul D. Leblanc, in honour of his late father, Albert Leblanc, a former judge in the Superior Court of Quebec.

“If we look around, there have been lots of discussions as to what could be done to make sure that we treat First Nations and Inuit well. There is a lot of talk and not very many practical programs to facilitate this,” said Leblanc, a retired senior partner at law firm McCarthy Tétrault in Montreal.

According to the university, this is the largest individual donation in the city’s history.

“I think that we have to act if we are convinced of our opinions of our purposes, and I thought the time was right,” Leblanc said. “We see all kinds of complications in the world and the time is right to try to do something about that.”

The scholarship is open to First Nations and Inuit students who reside in Quebec, starting UQAM’s Bachelor of Law program at the faculty of political science and law.

“We want to inform students in high school that this is available for them to come here,” said Pierre Bélanger, general manager of the UQAM Foundation.

“Romeo Saganash was there when we did the major celebration of this gift. He told everyone he would make sure this news was known in all the communities.”

Saganash is the former member of Parliament for the northern Quebec riding of Abitibi-James Bay-Nunavik-Eeyou. He’s also a graduate of UQAM.

The grant will be given out as $10,000 a year for the three years a student is enrolled in the Bachelor of Law program.

UQAM is a French institution, so Bélanger hoped this would be an opportunity to attract more French-speaking Indigenous students to pursue post-secondary education in French.

Depending on the number of applicants for the scholarship, Bélanger said recipients would be selected based on grades coming out of high school.

Bélanger, a lawyer himself, said the legal system is meant to reflect the composition of society. He hoped this scholarship would help advance that.

“Too often I’ve heard the fact that First Nations and Inuit don’t feel it is their law,” said Bélanger.

“I want them to feel they are part of the judicial system. They will make that change and the more lawyers we have coming from communities, this will help make our justice system a lot better at reflecting the society as a whole.”

This was also a point that struck Leblanc and inspired him to make the donation.

“The idea of having young people learning how to defend their rights, to me, is vital,” he said. “That’s the solution. It’s a solution that will go on and on and on.”

This donation was a part of UQAM’s 100 Million Ideas campaign, a fundraiser for the university to raise $100 million by 2022. The pot currently sits at $62 million, and Bélanger said 33 per cent of the donations from this amount will go toward student grants.

“We want to help our students because UQAM has the Canadian record for [the] first-generation of graduating students in the family,” said Bélanger.

“We have a lot of students that are the first generation going to college. UQAM has always been a very accessible university and, for us, that’s our pride.”

Any questions about the scholarship can be directed to registration at UQAM at registrariat@uqam.ca.