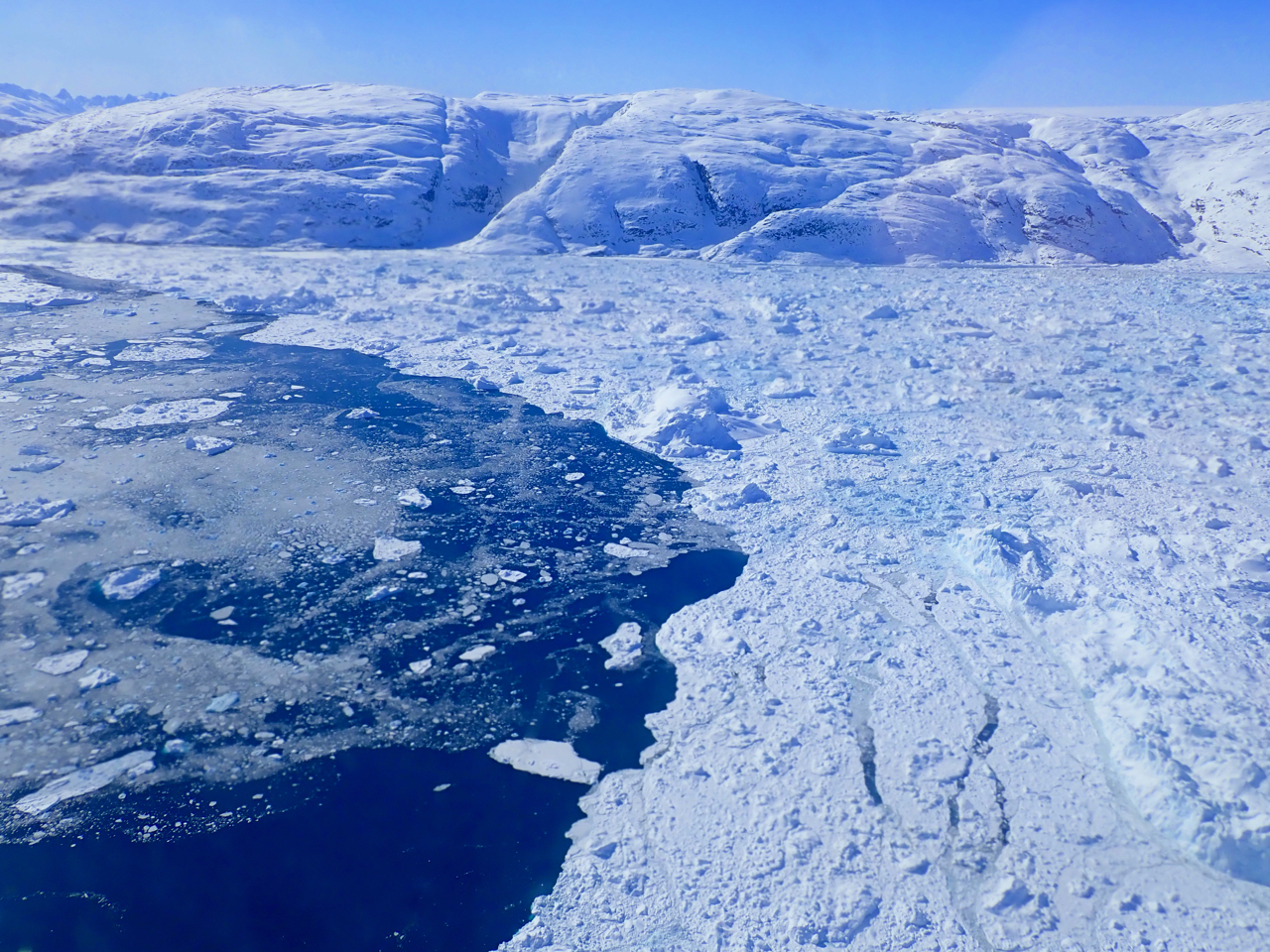 A fjord in east Greenland, seen during an Operation IceBridge flight on April 27, 2018. (Credit: NASA/Joe MacGregor)

The Arctic is warming and melting so rapidly that it is becoming a completely different place than it was in the late 20th century, according to a newly published report by an international team of scientists.

“The Arctic biophysical system is now clearly trending away from its previous state and into a period of unprecedented change, with implications not only within but also beyond the Arctic,” said the synthesis report, published in the journal Environmental Research Letters and prepared for the Arctic Council’s Arctic Monitoring and Assessment Program.

All the indicators tracked in the paper show the same trend, said co-author John Walsh of the International Arctic Research Center at the University of Alaska Fairbanks.

“There’s a consistent story in there,” said Walsh, who is IARC’s chief scientist.

Annual duration of snow cover has shortened by 2 to 4 days per decade; Arctic land ice was the single biggest contributor to global sea-level rise biggest contributor; average annual temperatures of permafrost in Alaska have risen to record highs. Spring snow cover has decreased by more than 30 percent since 1971. There is an earlier and more condensed flowering season for Arctic plants, which leaves “a progressively shorter time-window for the pollinators with possible subsequent cascading effects through the ecosystem.”

There are new discoveries about the carbon gases being emitted from permafrost that is thawing, tundra landscapes that are gaining plants and oceans that are accumulating more sediments and carbon-based biomass. The previous assumption that winter is a time of dormancy has been upended by new evidence, including evidence of carbon emissions through sea ice, the report said.

The dramatic changes in the North reverberate well south of the Arctic, Walsh said, with some effects more obvious than others.

The easiest to recognize, he said, is the rise of global sea levels that is caused by melt of Arctic glaciers and the Greenland ice sheet.

Another direct global impact comes from the increasing loads of greenhouse gases that the thawing and warming Arctic ecosystem is venting into the world’s air, he said. “That would be a feedback to the warming that we’re seeing,” he said. “Once those gases are into the atmosphere, they’re carried around by the winds.”

The loss of ice and snow that is speeding the Arctic’s temperature rise — the phenomenon known as Arctic amplification — affects lower latitudes because the differential between north and south is now smaller. “That can affect the jet stream,” Walsh said. Indications are that the warmer Arctic, especially in winter, is causing the jet stream to get wavier, possibly leading to prolonged cold periods in places like the U.S. Midwest and parts of Europe. That is an emerging area of study that needs more research, he said.

Other Arctic changes that impact the south include the increase in atmospheric humidity above waters that used to be dependably ice covered but are now open, Walsh said. “That may well contribute to heavier rainfall events, even in mid-latitudes,” he said.

The report identifies some areas where more research is needed. Among the subjects for which there are major knowledge gaps are Arctic precipitation, snow-water equivalent, hydrological processes, it said.