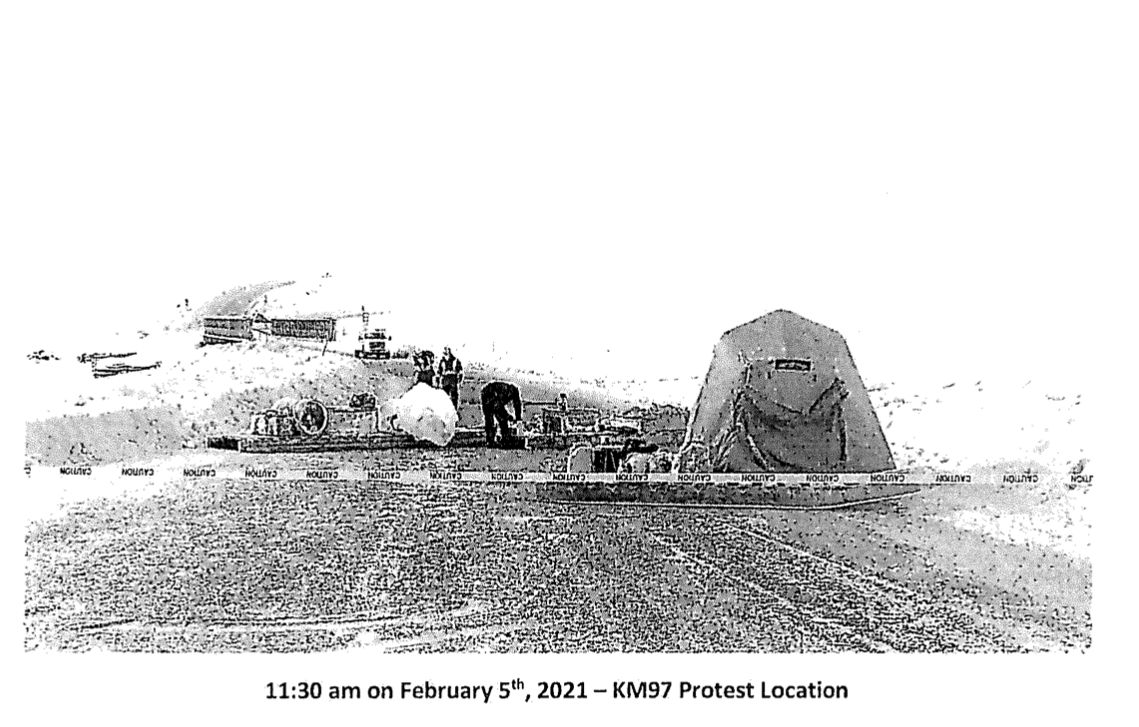 Protesters block the Mary River tote road with a tent and kamotiks on Feb. 5. (Nunavut Court of Justice photo)

All of us who care about Nunavut will be relieved that the protesters who occupied the Mary River mine’s airstrip and tote road for most of this past week have decided to end their blockade.

Because in doing so, they’ve avoided a potentially ugly confrontation.

The protesters, who call themselves the Nuluujaat Land Guardians, blockaded Baffinland Iron Mines Corp.’s mine on north Baffin over this past week to oppose its proposed expansion, and to protest the Qikiqtani Inuit Association’s role in the process.

The expansion, which is still before a public hearing, would double the mine’s output and see a 110-kilometre railway combined with up to 176 ship-transits through the environmentally sensitive waters of Eclipse Sound.

Late Feb. 11, Justice Susan Charlesworth signed an interim injunction in the Nunavut Court of Justice that authorized the RCMP — if necessary — to remove and detain anyone who continues to obstruct access to the Mary River mine.

So we owe a debt of gratitude to Pond Inlet Mayor Joshua Arreak, who proposed a face-saving option that lets the protesters abandon their blockade without having to admit defeat: a future meeting with officials from QIA and Nunavut Tunngavik Inc.

The Nuluujaat Guardians said yes to that offer and are now making plans to head home.

But what led to all this?

The answer likely lies within the Nunavut land claims agreement, which NTI now prefers to call the “Nunavut Agreement.”

That’s because the Nunavut Agreement contains next to nothing for Inuit communities. Instead, it’s a land management system that empowers Inuit organizations.

It does this through “designated Inuit organizations.” That’s legal jargon for any organization that NTI’s board authorizes to act on its behalf.

Through this system, the Qikiqtani Inuit Association became the manager of the region’s Inuit-owned lands and ended up as Baffinland Iron Mines Corp.’s only Inuit landlord.

Because of the cash that Baffinland is now shovelling into QIA’s coffers — commercial lease payments, royalties, and fees — QIA became a rich, powerful landlord.

And what does Pond Inlet and the other affected communities get? Not much — essentially, they get whatever benefits QIA decides to throw at them. That includes some benefits contained in the Inuit Certainty Agreement, which QIA struck with Baffinland during negotiations over the proposed mine expansion.

At the same time, many Inuit in Pond Inlet still believe they’re the rightful owners of the Nuluujaat lands, and should therefore receive royalty payments from Mary River mine. But legally, they’re not entitled to anything.

That fatal flaw in the land claims agreement has been on full display for years, ever since Baffinland Iron Mines Corp.’s expansion proposal landed within Nunavut’s regulatory system in 2014.

To participate in that regulatory process, the QIA enjoys nearly unlimited resources.

Communities, on the other hand, must make do with whatever intervenor funds they can scrape together from the federal government. It’s with these limited resources that they’ve been questioning Baffinland about the expansion project’s mostly unknown potential impacts on marine mammals and caribou.

And before we go any further, it’s worth reminding readers that this regulatory system is not a colonial imposition. It’s a creature of the Nunavut Agreement, developed by Inuit negotiators, embraced by Inuit voters in 1992 and for 27 years celebrated by Inuit beneficiaries across the territory every July 9.

The Nunavut Impact Review Board, which has yet to complete its assessment of the Mary River expansion, sits at the centre of that Inuit-designed system.

And yet the Nuluujaat protesters weren’t even willing to wait for the review board to finish its work before driving their snowmobiles all the way to Mary River during the coldest month of the year to set up blockades.

Their actions may have been foolish and dangerous. But the frustration they expressed is genuine and well-founded.

So when NTI and QIA sit down to meet with them, and with other representatives from Pond Inlet and the other affected communities, these two powerful Inuit organizations had better be willing to be flexible.