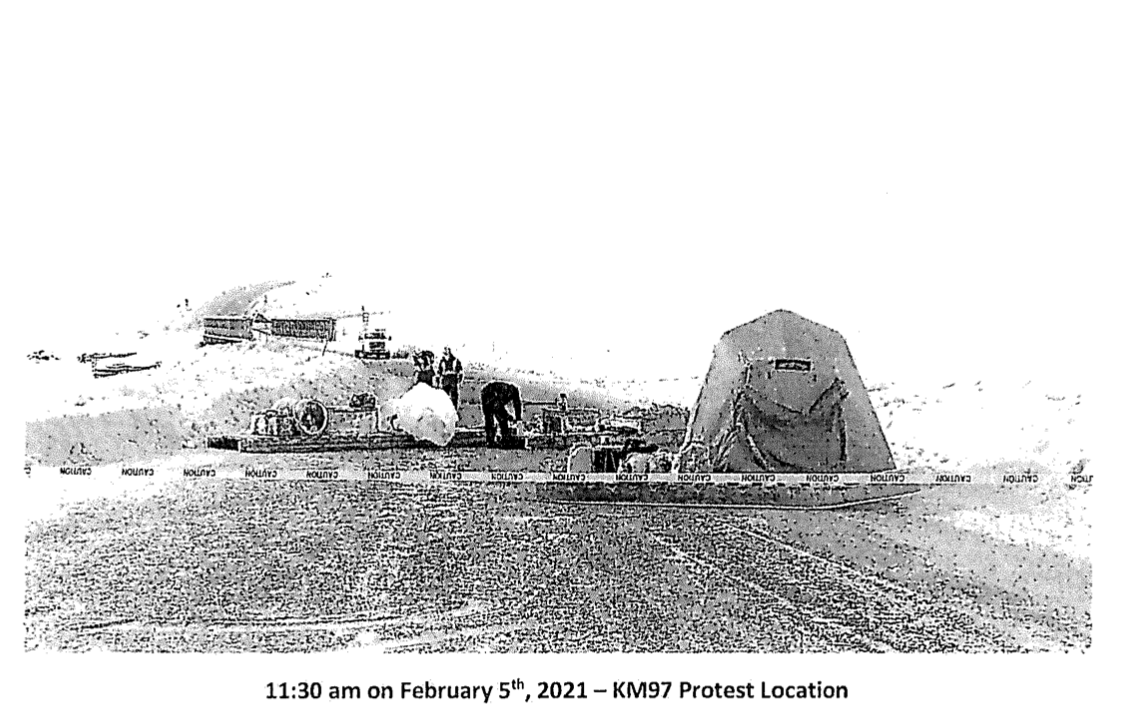 Protesters who have been blockading Baffinland Iron Mines Corp.’s mine at Mary River announced Wednesday night they will decamp and prepare for face-to-face meetings with community leaders and Inuit organizations. This photo submitted in court by Baffinland shows the protest site last week. (Photo from Nunavut Court of Justice)

After a week of blockading an airstrip and road to an iron mine on north Baffin Island, a small group of protesters are packing up their tents.

She sent out a news release late Wednesday, announcing the group would be decamping and moving to an observation position at a nearby hunting cabin, before heading to Pond Inlet Saturday to prepare for face-to-face meetings with community leaders and Inuit organizations.

The protesters call themselves the Nuluujaat Land Guardians, and they have been blocking access to Baffinland Iron Mines Corp.’s Mary River iron mine since the evening of Feb. 4.

The group of seven men travelled by snowmobile from the communities of Pond Inlet and Arctic Bay, journeys of approximately 12 hours and 36 hours, respectively.

The protesters oppose a proposal for expansion of the mine that would see its output of iron ore double to 12 million tonnes per year, as well as construction of a 110-kilometre railway. The Nunavut Impact Review Board recently held public hearings about the proposal in Pond Inlet. Those meetings adjourned Feb. 6.

The protesters believe their concerns the expansion will drive caribou away and harm other wildlife in the area, including narwhal, have not been heard. Inuit in the region depend on these animals for subsistence.

“We would like to see actual negotiations with the most impacted communities,” protester Naymen Inuarak told Nunatsiaq News over satellite phone from the encampment on Feb. 8.

Their presence rendered the mine’s airstrip and road impassable, which left some 700 employees stuck at the mine, with no access to fresh food or supplies.

On Feb. 10, in a flurry of activity at the Nunavut Court of Justice in Iqaluit, Baffinland’s lawyers sought an injunction for removal of the protesters.

Judge Susan Cooper issued a court order that morning, allowing access to the airstrip so employees stuck at the mine could go home.

Later that day, Pond Inlet Mayor Joshua Arreak proposed a plan to end the blockade by holding a meeting between the protesters, community leaders, Premier Joe Savikataaq and Inuit organizations that represent Inuit in the area, as soon as possible.

The meetings are intended to make sure the protesters’ concerns are understood, and hammer out support for those concerns before resumption of public hearings into the proposed mine expansion, which are scheduled to continue this March. The meetings also call for the Inuit organizations to commit to sharing more mine royalties with communities in the area.

“We are not satisfied with the benefits we are currently receiving,” states the news release, signed by Arreak and Pond Inlet senior administrative officer David Stockley. “This is an important issue for the protesters.”

Shortly after the news release was sent out, pictures appeared on social media showing RCMP officers at the Pond Inlet airport.

The news release from Naqitarvik acknowledged reports of their arrival. She said the protesters’ lawyer, Lori Idlout, spoke to their managing officer.

“Idlout has also spoken via satellite phone to the Guardians regarding this development,” states the release. “No immediate travel to the Mine Site is anticipated.”

The release also acknowledged Arreak’s proposal, saying the offer had been accepted, and details were being worked out.

That was mere hours before the final news release, announcing the protesters had reached a consensus to decamp to the hunting cabin before heading home.

“This departure will not end their advocacy in relation to the Baffinland Mine,” states the release.

“The Guardians are continuing action on the land unless they can see progress in proposed meetings.”

The release also thanks supporters for support and messages, and says the protesters look forward to returning to their families.

Baffinland acknowledged the end of the blockades in a news release issued on Thursday afternoon.

“We welcome the move to a constructive dialogue and hope to work in collaboration with our community partners to find mutually agreeable solutions to the issues that have been raised,” Baffinland CEO Brian Penney said in the release.