Meet the Experts on Inuit art 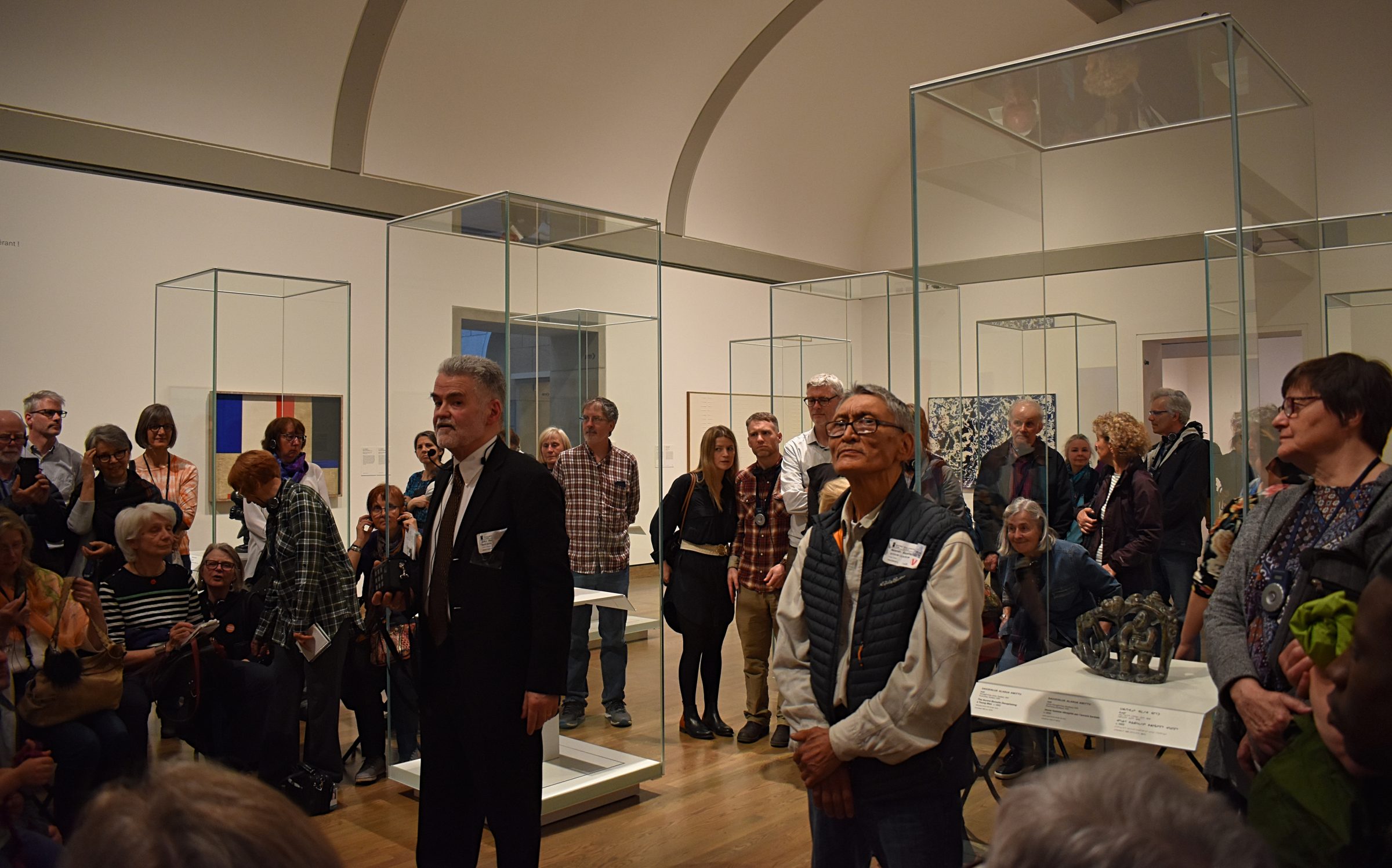 John Houston, left, and Manasie Akpaliapik speak at the National Gallery of Canada in Ottawa for the May 9 Meet the Experts tour. The duo led a dynamic evening focused on Inuit art. (Photo by Kahlan Miron)

Earlier this month at Ottawa’s National Gallery of Canada, enthusiasts arrived en masse to listen and learn about Inuit art.

Gathering in the Canadian and Indigenous Galleries section, the crowd followed artists Manasie Akpaliapik and John Houston as they led a Meet the Experts tour. The May 9 session focused on a collection of Inuit prints and sculptures.

Akpaliapik is a celebrated Inuit carver from Arctic Bay, and is also a drum dancer and drum maker. Houston, a filmmaker and the director of Houston North Gallery, was raised in and continually works with Arctic communities.

One of the draws of the event—for the artists, the gallery and possibly the audience too—was having an equal dialogue and dual perspective through an Inuit host and a non-Inuit host leading the tour. 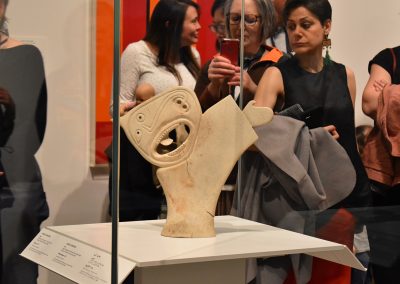 Figure by Karoo Ashevak was one of many Inuit artworks featured in the National Gallery of Canada’s Meet the Experts session with Manasie Akpaliapik and John Houston. (Photo by Kahlan Miron; art credit Karoo Ashevak, Figure)

Houston described it as “a dialogue between the two cultures and possibly crossing the divide.” He said the dynamic was especially powerful with the national discussion around truth and reconciliation.

“The idea that a settler and an Indigenous person would walk together and share … that’s got a lot of energy anyway, and particularly right now when Canadians are trying to figure out a right way forward.”

Akpaliapik also noted the value of their two cultures having an equal stage: “If we’re going to do something together, the white person and the Inuk person, for instance, we should be on the same level.”

“It always has been, because you’re Inuk you have to look at yourself [as] lower or something,” Akpaliapik said. “Inuit, I think we had [to] carry that for a long time. But now, with all the information that we’re getting, we can understand why those things happen … we just have to understand, start living together.”

For their Meet the Experts partnership, it helps that Akpaliapik and Houston worked together before on a project with The Walrus Foundation.

When the National Gallery reached out to Houston, who was strongly recommended by an active member of the Ottawa Inuit community, they asked who he might want to present with. Houston, remembering Akpaliapik, in turn named the Inuit artist.

Through conversations with session organizers, Nunatsiaq News learned that the gallery initially wanted to invite members of the Ottawa Inuit community for a special tour with Akpaliapik and Houston. However, because of their friendship and a strong interest from the public, the gallery decided to make it an cross-cultural event. People would have a chance to learn through two friends chatting and bringing a personal connection to the pieces.

Houston, who has done other gallery tours and art events, said he’s “very glad that the art has this abiding kind of energy and power that can still knock you over at 30 paces. There are people who just get knocked over by it and they have to find out why.”

In Canadian culture, Houston says, people often grow up with the stereotype of Inuit art as “a step or two down on some kind of evolutionary ladder.” But when people open themselves up, they start to see the art as “closer to the source” and something to be respected. Houston enjoys being part of that process.

Akpaliapik said he’d like to do more events like the Meet the Experts tour. He’s experienced the power of Inuit art as well in his own life. 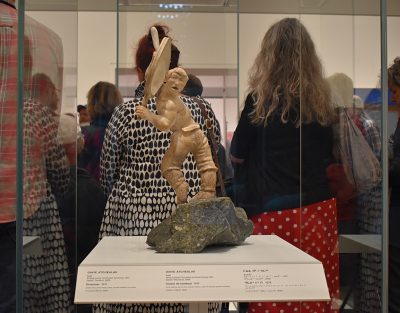 Growing up, Akpaliapik thought of carving as a last resort and for people who couldn’t get a job. “But right now, what I’m finding out is you can actually make a living from it, and it’s really rewarding for me.”

It keeps him connected to culture, he says, especially through remembering and keeping legends alive. Akpaliapik also finds it peaceful and soothing to create. When Akpaliapik struggled with alcoholism, he says it was his art and the support of many others that helped him get through it.

“My art was there to bring me back up, it seems like it saved my life,” said Akpaliapik.

When it comes to the Inuit art world, Akpaliapik said workshops and other initiatives are needed to encourage young people to explore art in northern communities.

“What you don’t know you don’t know,” said Akpaliapik. “Unless you bring it out, [then] people see it. That’s what I think is missing. It needs to be more visible in the communities.”

And the Inuit art world is complicated further by what Houston calls “shearing forces”: a young Inuk artist deals with different economic and social realities than previous artists, as well as the commodification of Inuit art and the rise of popular icons.

To buyers and sellers of Inuit art, however, Houston issues a general challenge.

Remembering instances where Inuit artists are paid by the pound instead of the content, or with alcohol instead of money, or are turned away because their names aren’t on a pre-approved list, Houston invites anybody connected to the Inuit art world (including himself) to “up their game.”

“In order to break stereotypes, there are times when you have to sort of flip the thing around, I wonder how this would work if we slid it past old Henry Moore? How would that go?”