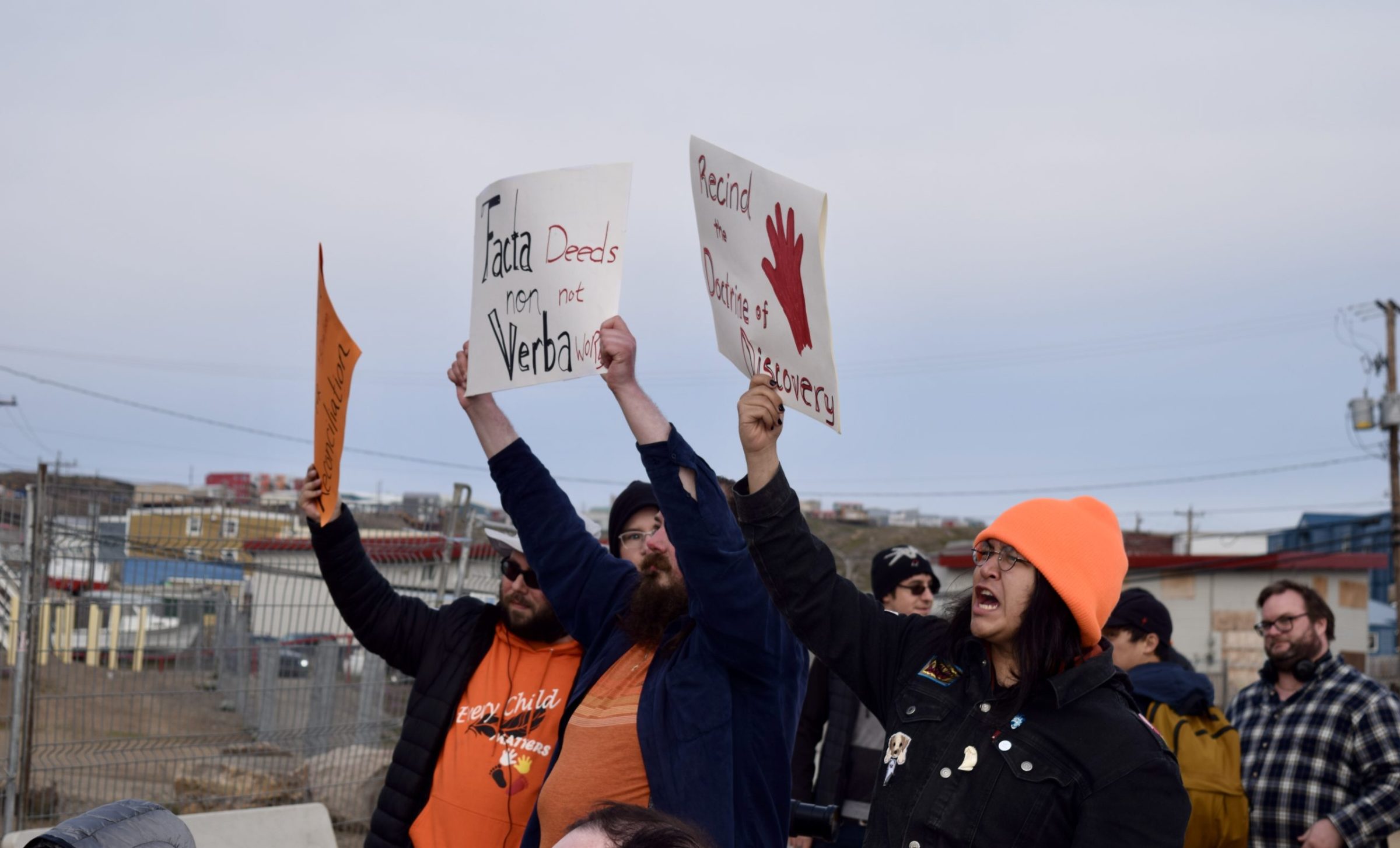 Members of the crowd at Pope Francis’ address in Iqaluit on Friday hold signs that say “Rescind the Doctrine of Discovery.” (Photo by Madalyn Howitt)

It was an evening of mixed emotions as Iqalummiut gathered outside Nakasuk Elementary School on Friday to watch Pope Francis make his final public appearance on his pilgrimage of penance across Canada.

Cool temperatures and a light drizzle of rain greeted the crowd, as people slowly gathered in front of the school in the late afternoon to hear the Pope address the city.

Simona Ukaliannuk was there with her family to support her grandmother, Therese Ilupaalik Ukaliannuk, who was one of the residential school survivors meeting with Pope Francis inside the school. The head of the Roman Catholic Church held a private meeting with Inuit who attended residential schools before speaking at a public event outside the school.

“Her speaking to the Pope is something she’s been looking forward to for a long time,” Simona said. “Hopefully it helps my grandmother to heal, to hear what he says. [I] hope it turns out OK, she was struggling a lot.” 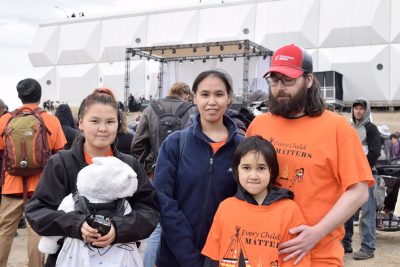 Simona Ukaliannuk (centre) and her family attend the Pope’s public address in Iqaluit on Friday. Ukaliannuk said she was there to support her grandmother, one of the residential school survivors who met earlier with the Pope inside the school. (Photo by Madalyn Howitt)

Around 3:30 p.m., a group of teenagers played basketball on the court nearby, while volunteers with the papal visit, wearing blue jackets, wandered through the crowd handing out grey hats with mosquito netting and orange water bottles.

Another volunteer offered headsets to anyone who needed translations in Inuktitut, English or French for the Pope’s speech, which was to be delivered in Spanish.

Some people in the crowd wore traditional Inuit clothing, while others donned orange T-shirts with Every Child Matters logos.

Evie Kunuk, from Iqaluit, wore a white amauti with blue trim to the community event. She said it was “nice to see” people wear traditional clothing because it represents a culture that the residential school system tried to put down.

Kunuk said she has family members and friends who went to residential schools, many of whom developed mental health problems as a result of their experiences.

“Lots of alcohol, for sure. Drugs just to numb the pain,” she said.

She said she believed the Pope’s apology and his visit to Canada will help foster reconciliation.

“I believe, but some people won’t agree, him apologizing is a start toward healing.” 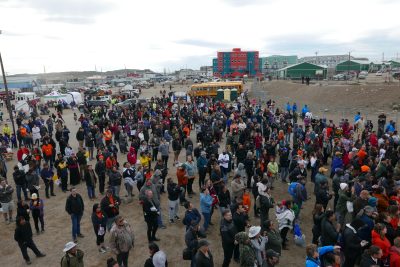 A crowd of approximately 1,000 people greeted Pope Francis outside Nakasuk Elementary School in Iqaluit on Friday, the final day of his “pilgramage of penance” visit to Canada. (Photo by David Venn)

The crowd of around 1,000 people waited patiently for Pope Francis’ arrival, which was running an hour behind schedule while he met with the survivors.

When the Pontiff did finally take the stage just after 6 p.m., a smattering of cheers met him as he took his seat at the right side of the stage.

A few shouts of “Welcome to Nunavut!” and “Thanks for coming, Pope” could be heard as the sounds of a video drone buzzed overhead. As Francis waved to the crowd, onlookers pulled out their phones, some taking selfies to commemorate the historic moment.

Before Francis delivered his address, a series of cultural performances opened the official papal ceremony on the stage, which resembled a qammaq, an Inuit summer home made of whale ribs, sod and stone.

The loudest cheers were saved for elder Piita Irniq, who gave an Inuit drum to the Pope and thanked him for coming to Iqaluit. 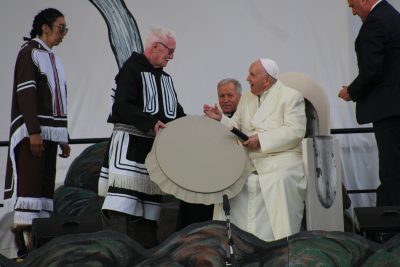 Piita Irniq, a residential school survivor, gives Pope Francis an Inuit drum he made. Irniq, 75, drum danced for the Pope during a show of Inuit culture during Francis’ visit to Iqaluit Friday. (Photo by David Venn)

As Pope Francis began his speech, a hush fell over the crowd. At the moment he apologized for the harms perpetrated against children at residential schools, some audible sighs and some muted cheers rippled through the crowd.

The crowd began to thin about a third of the way through the Pope’s speech, which clocked in at over an hour. The Argentinian-born Pope spoke in his native Spanish, while two interpreters repeated the speech in Inuktitut and English.

Some people even left early to do their grocery shopping at the Northmart across the street from the stage, and the crowd was nearly gone mere minutes after the pontiff left the stage.

Lena Totalik, of Iqaluit, felt the apology was a “step forward” on the path toward reconciliation, but said she wants to see more counselling support for elders healing from residential school abuses.

Alexina Kublu, from Iqaluit, said it was “encouraging” to hear the Pope address young people in his speech, but she wanted to make sure “parents and grandparents” are also remembered for all they lost in the residential school system.

Tuqqaasi Nuqigek, from Iqaluit, said it’s important to “show up for apologies so that you know it’s happened and you can hold the apologists to account.” She said she appreciated that the Pope seemed to be taking his time with his speech, but she was more interested to know what actions toward reconciliation would be taken by the Catholic Church after Francis’ apology. 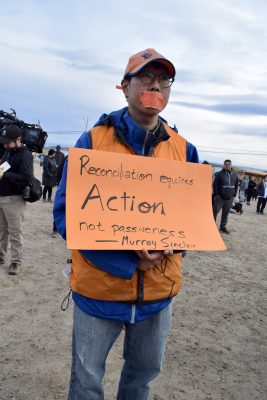 About half a dozen people gave the Pope what they called “a gentle reminder” that reconciliation requires more than words.

“It’s a bag of mixed feelings, for a lot of reasons,” said Daniel Legacy, who lives in Iqaluit, describing the array of messages their signs conveyed.

Once Francis arrived on the stage in front of Nakasuk Elementary School, they held Bristol-board signs over their heads with messages that called on the Pope to rescind the Doctrine of Discovery, asking if the church’s $30-million pledge for healing programs was “a lie,” and showing that residential schools didn’t close in Chesterfield Inlet until 1969 and in Rankin Inlet until 1997.

“This is not historic. This was in our lifetime,” one sign said.

“These are messages the Pope should hear,” said Sandi Chan, who felt the Pope’s speech sounded like “he was giving advice, not an apology.”

His speech felt like a mass rather than a penance,” Legacy said.

“Nobody asked for a sermon,” said Jonathan Park, who held an orange sign with a quote attributed to Murray Sinclair, who was chairperson of the Indian Residential Schools Truth and Reconciliation Commission: “Reconciliation requires action, not passiveness.”