Regular members unhappy they were not allowed to see draft policy 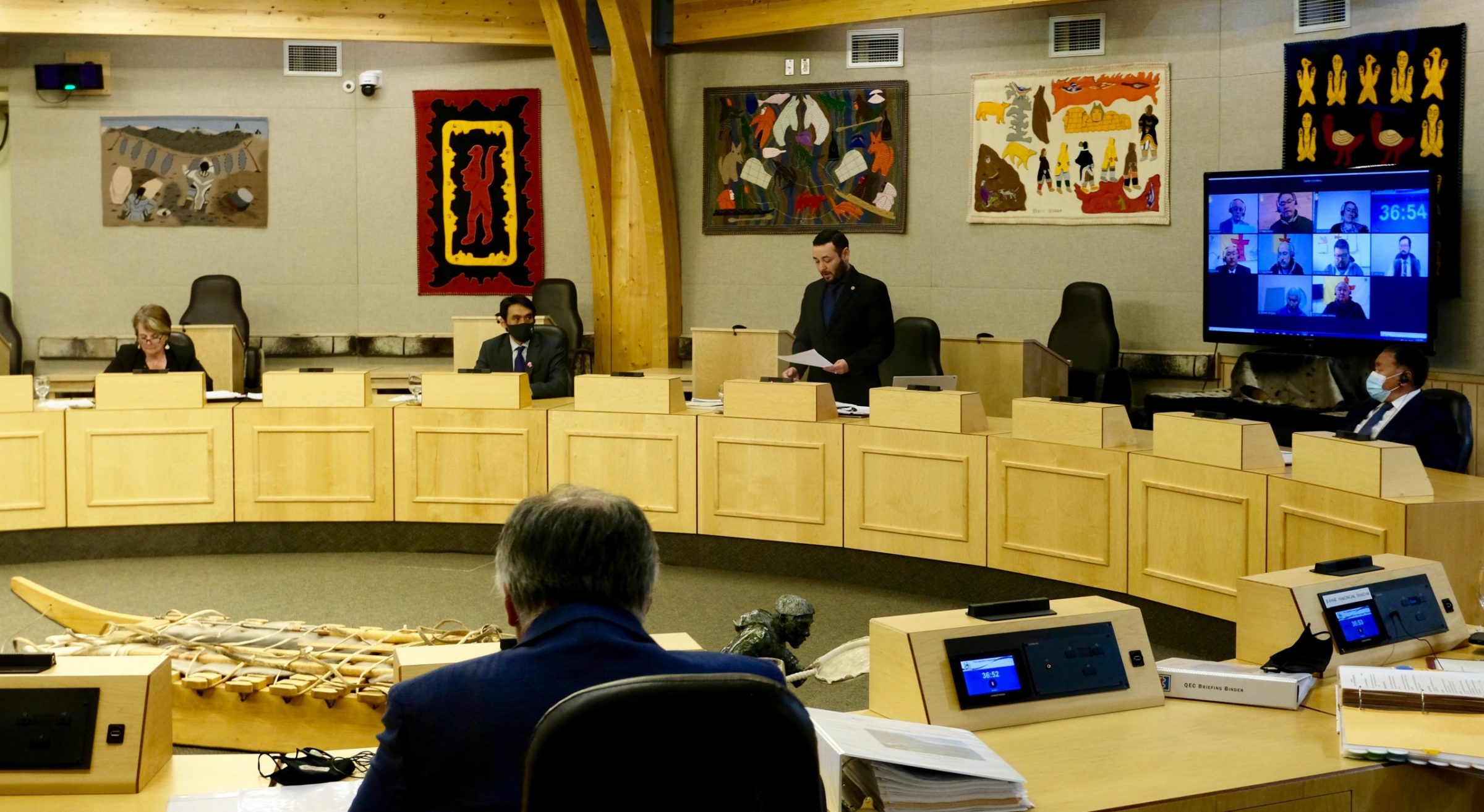 Nine of 10 regular members of Nunavut’s legislative assembly voted against a proposed $500,000 program to help GN employees save up for a down payment on a house on Wednesday. (Photo by Mélanie Ritchot)

In a 10-to-nine vote, members of Nunavut’s legislative assembly struck down a program pitched to help get Government of Nunavut employees into the home buyers’ market and out of staff and public housing.

Through Bill 70, Finance Minister George Hickes was seeking $500,000 for the Nunavut Housing Corporation to launch a program that would help GN employees buy or build new homes.

The Homebuyer Matched-Savings Program would have set aside money from each paycheque for participants, then matched the amount saved once they’re ready to make a down payment on a home, effectively doubling their savings, Hickes explained on Tuesday, when he presented the bill.

MLAs were denied the chance to see the draft policy this week, which spurred Uqqummiut MLA Pauloosie Keyootak to bring forward a motion to delete the program from the bill. That motion was carried on Wednesday.

“As members, we have not been properly informed of the details,” Keyootak said. “I don’t want to approve it because of the uncertainty as to how it will be implemented.”

He was one of multiple MLAs who voiced concerns about a lack of information.

Regular MLAs typically don’t see draft policies, but a program like this is normally finalized before funding is requested. In this case, Hickes said his department was looking to approve the funding before finalizing details, to get the program running as soon as possible — ideally before fall.

Details that still need to be ironed out include how employees who access the program will be taxed, how long people need to live in the territory to qualify, and what the funding limit per household will be, Hickes said.

Hickes said he was “very disappointed” the motion was brought forward, adding that with territorial elections coming soon, it could take over a year for the next government to create a new policy like this. He also invited MLAs to ask him more questions about the program.

“This has the potential to take homeownership opportunities away from Inuit families in this territory and I do not want any part of that,” he said about the motion before it was carried.

Premier Joe Savikataaq said it’s the job of regular MLAs to pass legislation, rather than create policies and regulations.

“Once the policy is passed and is approved by cabinet, then the regular MLAs can hold us accountable,” he said. “They can criticize the policy and ask for amendments to make it better.”

In response, John Main, MLA for Arviat North–Whale Cove, said he can see the value in the proposed program and home ownership is important, but “I do have to disagree that legislators are not allowed to look at policy.”

“If we could have gone back and received a copy of the draft policy following [Tuesday’s] meeting, perhaps we wouldn’t have been where we are right now.”

Although MLAs didn’t get the chance to see the program draft, Nunavut Tunngavik Inc. did.

This is because the Nunavut Land Claims Agreement says Inuit must be given the opportunity to participate in the design of social programs.

Adam Arreak Lightstone, MLA for Iqaluit-Manirajak, said he was disappointed the draft policy was shared with an outside organization and not with MLAs.

“I would like complete assurance that this program will be designed to succeed in such a way that will benefit Inuit and low-income employees,” he said.

In the last sitting of the legislative assembly, Lightstone tabled a report that showed the highest paid GN employees take up 70 per cent staff housingunits.

In the vote, Hudson Bay MLA Allan Rumbolt was the only regular member to vote to keep the proposed program on Bill 70.

Bill 70 is currently going through second reading in the legislative assembly.

It also includes an increase to the government’s operations and maintenance budget by $10 million to support northern airlines, and $17.11 million to continue operating isolation hubs through September 2021.