MMIWG redux: The struggles and triumphs behind the scenes 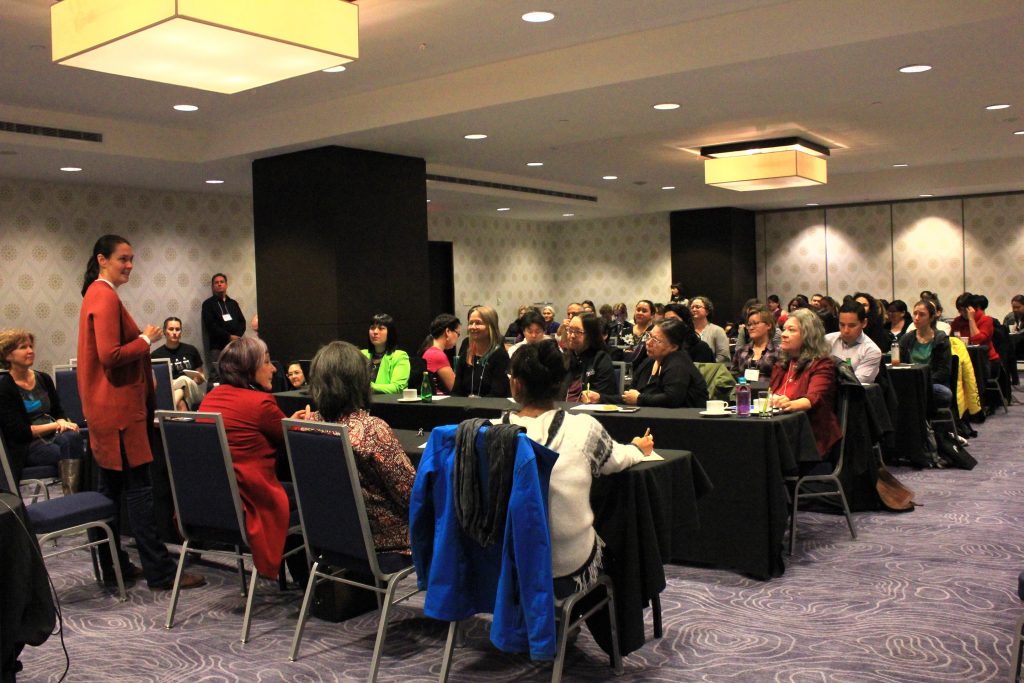 MMIWG commissioner Qajaq Robinson tells an audience at the Inuit Studies Conference in Montreal on Oct. 3 that the inquiry’s broad mandate—to look at systemic causes of violence against Indigenous women in Canada over the past 20 years—made the work particularly daunting and unique, because inquiries are usually called to consider only one event or issue. (Photo by Lisa Gregoire)

The National Inquiry into Missing and Murdered Indigenous Women and Girls was never really about Indigenous women, says Qajaq Robinson, one of the inquiry’s four commissioners.

Instead, it was about the systems that caused violence against Indigenous women or allowed it to happen for decades, she said. It was a chance, finally, to examine the ugly details, of how that epidemic of violence occurred, through the eyes of those women and their families.

It’s been four months since the commissioners of the MMIWG inquiry released their final report—four months since they prompted a media firestorm by using the word “genocide,” nearly 150 times, to describe what they say was deliberate and systemic race- and gender-based violence perpetrated against Indigenous women, girls and LGBTQ peoples in Canada over the past 20 years.

Robinson, along with three Inuit women who worked for the inquiry, gathered at the Inuit Studies Conference in Montreal on Oct. 3 to talk about the triumphs and struggles during their complex and draining three-year journey across a massive country and deep into its shameful history.

So, has anything changed for Indigenous women?

“But the most important element of the calls for justice were really about doing things differently. So I don’t necessarily hold my breath or get excited when government says what they are going to do. It’s more about how they’re doing things, or not doing things. Self-determination is not about the government doing for. It’s about backing off and supporting the community.”

Robinson, an Inuktitut-speaking lawyer born in Iqaluit and raised in Igloolik, said complying with all the different provincial and territorial jurisdictions in order to serve the inquiry’s broad mandate was challenging.

“It was a clusterfuck, from a legal sense,” Robinson said to an audience of 100 or so conference participants, 90 per cent of whom identified as women.

But it was also unique because everything revolved around participant testimony, she said. Participants’ trauma and their Indigenous cultures informed each community hearing and the entire truth-gathering process. And, more significantly, commissioners insisted there be no cross-examination of witnesses, thereby omitting standard legal protocol for a national inquiry.

“All this crap that’s supposed to make it more true or less true, we didn’t care,” she said, because it’s disrespectful, it’s not trauma-informed and, “how is it actually giving us the truth? If you’re looking at a systemic analysis, the voices of many paint the picture of what the truth is. So we pissed a bunch of people off and said ‘no’ but that was our prerogative.”

The MMIWG inquiry was also unique in that despite having no Inuk commissioner, the inquiry ensured Inuit-specific needs and issues were addressed—northern isolation, overcrowding, a lack of safe shelters, for example—and that Inuit-specific sections were written into the report through an Inuit working group, special advisors and others. The inquiry’s final report included 50 Inuit-specific calls for justice.

Robinson’s fellow panellists talked about the roles they played and their own struggles to be effective, loyal Inuit advocates and not to burn out in the process.

Nunatsiavut lawyer Violet Ford-Roy said her main goals were to ensure Inuit rights were respected, to build relationships with participants so they would trust the process—some of whom were disclosing past traumas in public for the first time—and to be patient with government lawyers, other Indigenous groups and the unrelenting constraints of time and money. With all that in mind, she said the inquiry made some things very clear.

But it also provides policy guidance to governments and organizations and endorses the work that’s already being done, such as repeated calls for self-determination by Inuit Tapiriit Kanatami, she said, nodding to ITK leader Natan Obed in the audience. He nodded back.

Nunavik’s Lisa Koperqualuk, who was hired to gather documents and statistics on Inuit women and identify research gaps, said information was piecemeal and uneven across Inuit Nunangat.

Koperqualuk also attended community hearings, pored over transcripts and helped to translate testimony into themes and meaningful calls for justice. She and other Inuit who worked on the report were determined to ensure Inuit language, concepts and images were honoured and incorporated.

“After a few days, I couldn’t concentrate anymore. It was so deep and so emotional. It’s the first time I’m sharing that in public,” she said. “It’s very, very, very impacting on you personally. And this is, I know, the experience of everyone who worked on the inquiry.”

Looee Okalik, who provided mental health support to inquiry participants, said the Inuit working group was so helpful and successful in informing the commissioners’ work that First Nations and Métis decided to create their own working groups.

Okalik said it was tough sometimes to focus on families and community needs and ignore the controversies that dogged the inquiry throughout its mandate—timeline delays, budget increases, accusations of federal interference, leadership squabbles and numerous staff quitting or getting fired.

But as several of the panellists said, there was no cookie-cutter formula for hearings. Inquiry staff had to respect the diverse cultural needs of many different communities and ensure witnesses were not re-traumatized. That took time, creativity, generosity and patience.

Okalik said she drew upon 100 years of Inuit history and resilience in the North including the teachings of her grandparents in Pangnirtung and of her mother who told a story of giving birth as her family group moved from its winter to its spring camp.

“The ice was breaking, she was in labour, and the only time she stopped was when she was to deliver, and continually had to move on thereafter. So the resilience is factored into our society,” she said.

When the panellists had finished speaking, Obed asked how they felt about the future, now that this inquiry’s mandate has ended.

Robinson said the initial public reaction, which was at times “violently defensive,” was an eye-opener. Now that people have had a chance to digest the findings, it’s time non-Indigenous people start doing the work of de-colonizing their homes, communities and places of work.

“When we talk about these issues in this historic way, or situate it exclusively with Indigenous people, we are ignoring our responsibility as non-Indigenous people to say, ‘Shit, we’re doing this,’” she said.

“I might not have been a teacher at a residential school. I might not have been in cabinet when those policies and laws were put in place and the Indian Act was established, but it’s my legacy. I maintain it. I hold it up if I’m not challenging it and deconstructing it.”