Donna Paré, a 32-year-old Inuk woman from Iqaluit, among those remembered 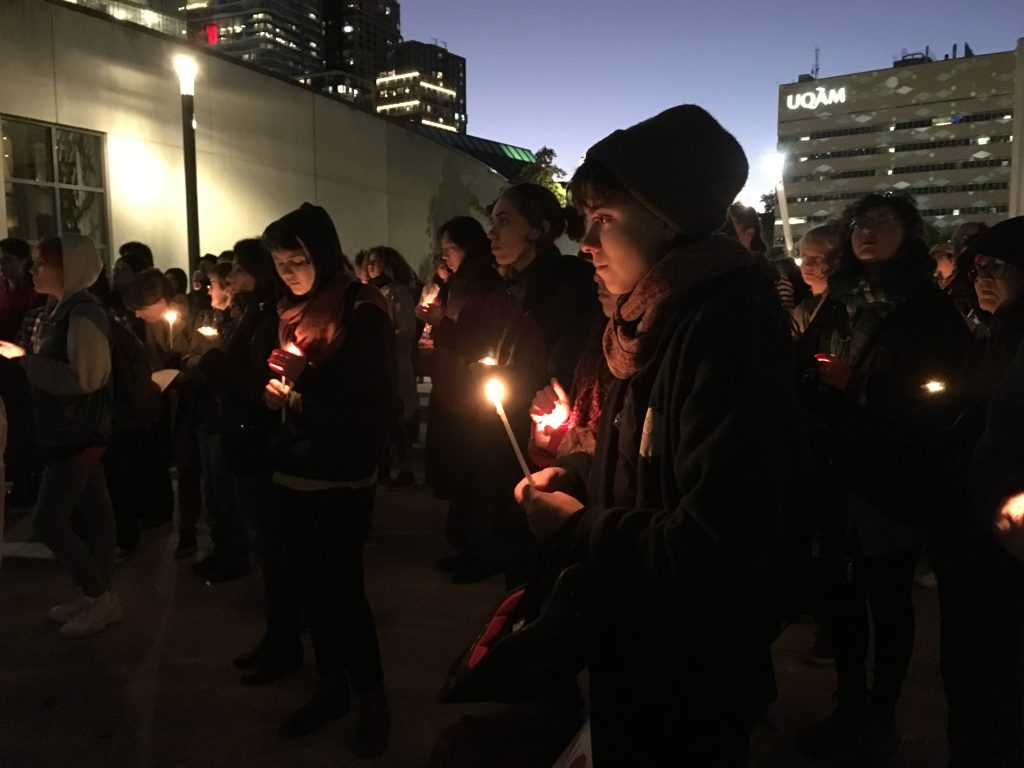 About 100 people gathered in Montreal on Friday, Oct. 4, in memory of missing and murdered Indigenous women. (Photo by Charlotte Glorieux)

MONTREAL—About 100 people gathered behind the Museum of Contemporary Art for a candlelight vigil to remember missing and murdered Indigenous women on the evening of Friday, Oct. 4.

Among the missing women mentioned in the opening speech was Donna Paré, a 32-year-old Inuk woman from Iqaluit who had been living on the streets of Montreal.

Paré has been missing since December 2018, although her disappearance was only reported in March, according to a police news release. 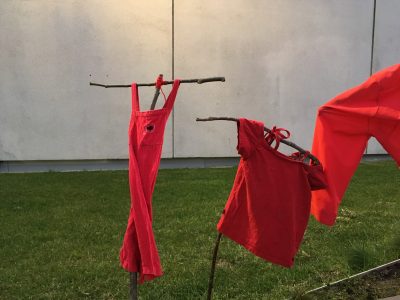 On the annual day of remembrance and action for missing and murdered Indigenous women and girls, many brought signs and they gathered in small groups around a display of red clothes representing the women

The atmosphere was calm, yet some members of the group expressed their anger. “Even with the excuses [made by the Legault government], it doesn’t change much,” said a woman holding a sign that read “Québec s’excuse” (Quebec apologizes).

On Oct. 2, Quebec Premier François Legault publicly apologized on behalf of  Quebec to the province’s Indigenous people. This was the first recommendation of the Viens Commission report published earlier last week. The commission put together 142 measures to begin reconciliation between Indigenous peoples and the public services of Quebec.

The vigil started with a speech by Dayna Danger, the programming and campaigns coordinator at the Centre for Gender Advocacy, who spoke about the importance of showing support for all missing and murdered Indigenous women.

“There are many women who are missing and are being murdered, and there is not enough awareness, we don’t talk about it enough,” said Danger.

The crowd was given candles that were lit as a woman who called herself Mama Bear from the Mi’kmaq community made a speech in honour of missing and murdered Indigenous women.

Five artists continued the evening by performing traditional songs accompanied by drums. Dayna Danger walked along the half-circle formed by the crowd and held up a sign with a picture of Donna Paré. Maya Cousineau Mollen, an Indigenous artist, read a few extracts from her poetry book “Brivière du matricule 082.”

She explained that she often wrote with the influence of rage. “Too many, never enough,” she concluded as the crowd applauded her.

The night ended with a half-hour artistic performance by a woman, dressed in jeans and a grey T-shirt, who retrieved four buckets of water from the fountain in Place des Arts. A cold wind was blowing. 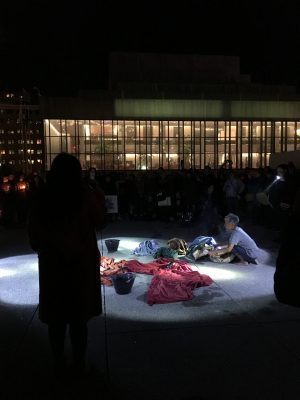 As part of the ceremony, a woman cleans seven rocks stained with a bright red liquid. (Photo by Charlotte Glorieux)

The crowd formed a circle around her as, using slow deliberate movements, she cleaned seven rocks stained with a bright red liquid. When her work was done, she left, her grey T-shirt now wet and stained with the red liquid. The crowd was then invited to place the candles they received alongside the rocks, which were now placed  in circles.

The march was supposed to assemble at Cabot Square and continue to the Quartier des Spectacles, but the event turned into a vigil. The Southern Quebec Inuit Association had a wellness agent there to provide support to individuals attending.

Similar events were held that evening across Canada.