Marina Boulos-Winton, the executive director of Chez Doris, and Cathy Wong, the city councillor for the Peter-McGill district and Speaker of Montreal city council, talk about the plans for a new 22-bed women’s shelter in downtown Montreal on Oct. 16 at a news conference at Chez Doris. (Photo courtesy of the City of Montreal)

Montreal’s downtown borough of Ville-Marie has given the green light to an expansion project launched by Chez Doris, a day shelter for homeless women, by granting a zoning change for a building it acquired last year.

The borough’s decision, announced on Wednesday, Oct. 16, will allow for major renovations to the new building located not far from the current shelter, so it will become a new emergency night shelter for women. 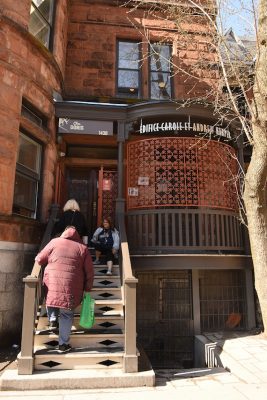 Chez Doris, the women’s day shelter at 1430 Chomedey St. in Montreal, is open seven days a week to women who need help. Many are Inuit. (File photo)

The shelter’s current building is located on Chomedey St., not far from Atwater St. and Cabot Square, a gathering place for Inuit downtown.

Chez Doris is familiar to many Inuit women, who make up about 15 per cent of the shelter’s clientele.

Slated to open in the winter of 2021, the building that will house the new emergency overnight shelter was purchased last year with a $1-million donation from Montreal businessman Andrew Harper through the Jewish Community Foundation of Montreal.

“Thanks to our new pavilion, we will be able to offer 22 emergency overnight beds for women who are homeless,” said Marina Boulos-Winton, the executive director of Chez Doris, in a news release following an event held at the Chez Doris shelter.

“Currently, women make up about 25 per cent of the homeless population in Montreal, yet the resources dedicated to women in vulnerable situations are far from sufficient. This project is certainly a step in the right direction.”

The good news about the shelter’s expansion came less than a week after a longtime Inuk shelter client, Klara Okkuatsiajuak, originally from Nunatsiavut, passed away on Oct. 11 in hospital. Boulous-Winton told Nunatsiaq News that Okkuatsiajuak had never recovered from the recent loss of her daughter to suicide while in jail.

Most of the shelter’s Inuit clients first end up in the city as a result of housing shortages and legal problems, Boulos-Winton said.

Many of them come to sleep in Chez Doris’s six respite beds during the day where they sleep for a few hours and then head back out onto the streets for the night.

That will change with the new night shelter.

For now, Chez Doris, which receives up to 100 women a day, offers services and programs to provide for women’s basic and immediate needs related to homelessness, poverty, mental illness and addictions.

Boulos-Winton said the numbers of Inuit women using the shelter have remained stable since 2018.

“However, we have seen a surge in the number of Inuit women needing help with primary needs such as emergency clothing and showers,” she said.

Dependent on donations for its programs, Chez Doris had to stop offering its weekend service for six months in 2014 due to a lack of money.

“We hope to receive financial support from Makivik [Corp.], but do not know at this time if we will,” said Boulos-Winton.

Chez Doris runs an Inuit assistance program—but Chez Doris fundraises to offer this program, as it does for 70 per cent of its roughly $1.7-million annual budget.

Cathy Wong, the city councillor for the Peter-McGill district and Speaker of Montreal city council, said at the announcement about the new night shelter that it would give women access to “adapted services offered by people who care about their well-being and their safety.”