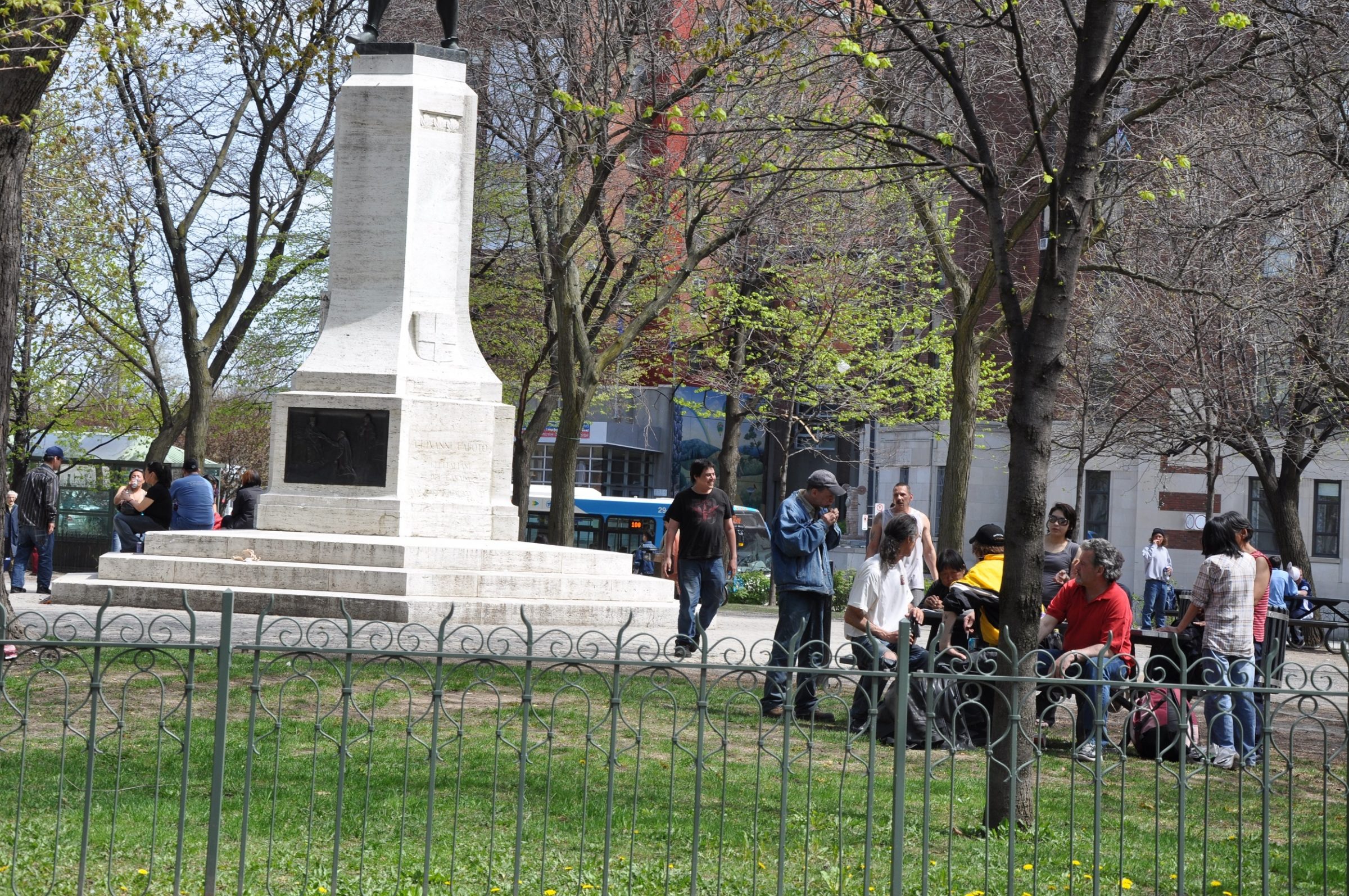 Cabot Square, seen here before its recent renovation, remains a gathering point for the homeless in Montreal, where many Indigenous people go for food, clothing or other supplies. But maintaining social distancing and hygiene is a challenge, says a coalition of Indigenous groups who want more attention paid to the needs of homeless First Nations, Inuit and Métis in the city. (File photo)

Retail stores opened yesterday in Montreal, but a coalition of the city’s Indigenous groups says it’s much too early to ease up on pandemic restrictions while homeless First Nations, Inuit and Métis remain at high risk of contracting COVID-19.

“We are uncomfortable with Quebec’s decision to proceed with deconfinement measures whilst the spread of the virus in our sector is only beginning to peak,” said a statement from the Native Women’s Shelter of Montreal, The Open Door, Resilience Montreal, the Southern Quebec Inuit Association, the Indigenous Street Worker Project, First Peoples Justice Centre of Montreal, Exeko and the Montreal Indigenous Community NETWORK.

Loosening confinement measures could “dramatically increase the risk of contamination,” the coalition said, urging Quebec officials to pay more attention to how the pandemic affects marginalized communities, such as the homeless.

“The COVID-19 pandemic has enhanced the existing hardships faced by the Indigenous community, and the lack of resources available for basic human necessities have put Indigenous people living in homelessness in a particularly precarious position,” the coalition said.

The coalition said there’s a risk that homeless Indigenous people will end up being infected at rates similar to that found in Quebec’s centres for the elderly, which have been hot spots for COVID-19 infections.

“While some important steps have been taken, the community requires significant and more long-term support until the pandemic is truly over,” the coalition said.

To that end, they want to see existing and additional temporary emergency shelters maintained until the pandemic has passed.

One shelter, the Native Women’s Shelter of Montreal, had to close temporarily on May 14 after workers there contracted the virus.

“We remain fearful that other Indigenous-serving shelters and centres will soon follow suit,” the coalition said.

Its members would like to see more adapted social housing, as well as housing with alcohol management programs, or even a dedicated site for tents “from which people have the choice to self-isolate, yet can come and go as they please with no surveillance.”

The coalition also wants the police to back off from homeless people. “We have seen an increase in criminalization, ticketing, aggressive intervention, and arrests of those living on the streets, as well as front-line workers serving this community.”

As well, the coalition wants to see widespread on-site testing in shelters, centres, and other community spaces, as well as the collecting of information about the health status of Indigenous people.

“We are therefore unable to have a full picture of the effects of the virus on our marginalized community,” the coalition said.

The coalition said it has been told to improve basic measures such as social distancing, hand washing and wearing masks.

The City of Montreal says masks will be provided to members of the city’s homeless population, as well as in food boxes for those who visit food banks.

But hand washing is hard for homeless people to maintain, as “basic sanitary measures are already near impossible to follow,” the coalition said.

The coalition wants professional cleaning services with public-health-approved supplies to control the spread of the virus in non-profit centres and shelters serving the homeless.

Since March 30, 543 homeless people in Montreal have been tested for COVID-19: 19 tests came back positive, according to statistics from the local health board.