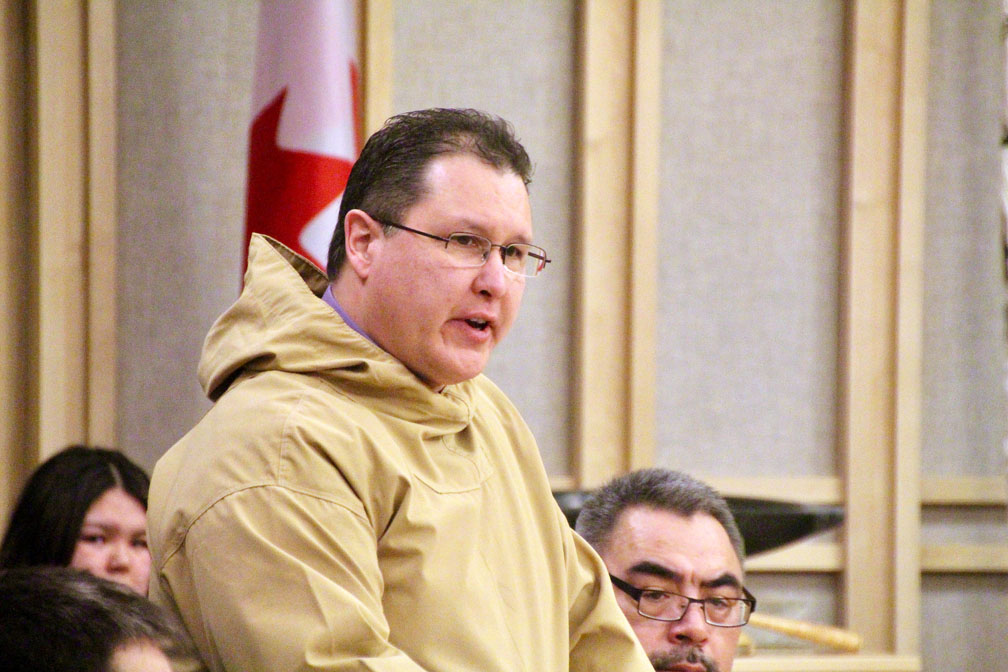 Partnerships B.C., an agency owned by the Government of British Columbia that provides advice and management expertise for private-public partnerships, is expected to submit a report on elder care to the GN, Health Minister George Hickes told MLAs earlier this week. (Photo by Beth Brown)

By this summer, the Government of Nunavut will know more about how it will create badly needed extended-care facilities for elders in each of the territory’s three regions, Health Minister George Hickes has told MLAs.

That’s when Partnerships B.C., a Crown agency owned by the Government of British Columbia that provides advice and management expertise on private-public partnerships, is due to submit a report on elder care to the GN.

“We are looking at this summer of having it completed and coming forward with options to the legislature probably by the fall,” Hickes said on Monday, Feb. 25, in response to a question from Aggu MLA Paul Quassa.

When Quassa asked if Inuit corporations would be involved in any future requests for proposals, Hickes answered by saying the GN will wait for the Partnerships B.C. report.

“I hate saying this, but we are waiting for that report to be done so that we can make educated decisions on our path forward instead of knee-jerk reactions,” Hickes said.

Hickes also said that report “will help tell us of exactly what types of facilities are needed to meet today’s and tomorrow’s needs.”

In response to another question, Hickes said the GN is still looking at an unsolicited proposal that it received from the Hamlet of Kugluktuk in 2017.

Under that proposal, the hamlet would create a 24-bed long-term continuing care centre for elders who need high levels of extended care or who suffer from dementia, at an estimated construction cost of $21.4 million.

The Hamlet of Kugluktuk has already done site preparation work and has set aside $1 million of its own money for the project.

And the GN has not yet said no to Kugluktuk’s idea, Hickes said.

“We are looking in the west, in Kugluktuk, of taking a look at, as has been talked about here in the House many times, the unsolicited proposal that we received from them,” he said.

“We are looking at trying to find a way to make that happen.”

As for extended, high-level care for elders who suffer from serious health conditions like dementia, there are only 28 beds in Nunavut, divided among three extended-care centres located in Cambridge Bay, Igloolik and Gjoa Haven.

Another 28 elders, many of whom require medical and nursing support, are staying at the Ottawa’s Embassy West centre, which specializes in dementia care.

To pay for their care, Hickes is requesting an additional $4.3 million through the Department of Health’s budget.

Hickes told MLAs that Embassy West is the only such facility in southern Canada that the GN uses, because it’s the only facility that responded to a request for proposals that the territorial government issued several years ago.

“All other beds that are in the territory are utilized for the elders that we can meet the care of. If we can’t meet the needs of anyone in-territory, then we use the Embassy West facility,” Hickes said.

At the same time, the GN deals with continuing concerns about the well-being of elders who live far from home in Ottawa, such as access to interpreters and Inuktitut-speaking staff.

“It’s not a perfect world. I’d be the first to admit it has been challenging hiring interpretive staff. Embassy West has worked very hard with us. They currently have two people working with them and providing interpretive services,” Hickes said on Feb. 21, in response to questions from Pangnirtung MLA Margaret Nakashuk.

But Nakashuk told Hickes that interpreters are not available at Embassy West after hours.

“The last time we were there, and that was in the summertime, one of the issues that was brought forward was there is no interpreters after hours, from about suppertime until the following morning,” she said.

Hickes responded by saying he will ask his officials to contact Embassy West to talk about hiring additional interpreters.