More security, less formality: What to expect when the Pope visits Iqaluit 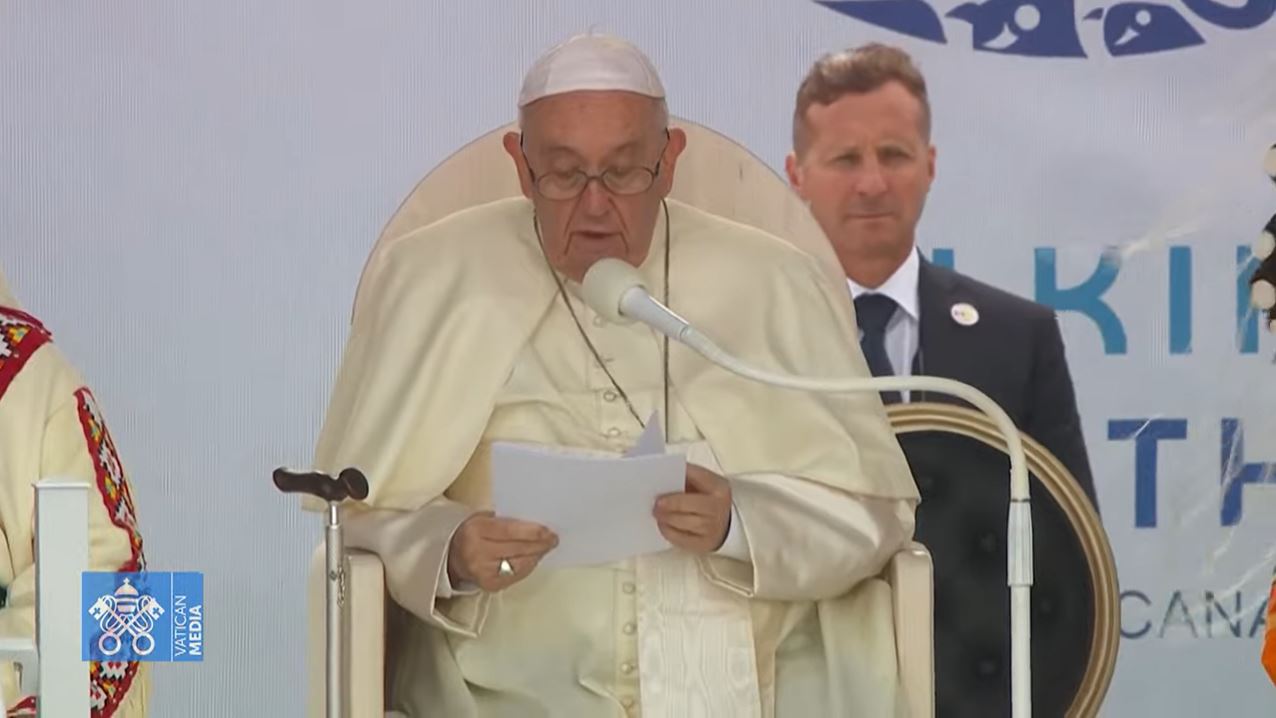 Pope Francis speaks at a ceremony on the former site of Ermineskin Residential School in Maskwacis, Alta., on Monday. (Screenshot from Vatican News/YouTube)

When Pope Francis visits Iqaluit on Friday, people will likely see him surrounded by a team of staff and security.

They might also see him wave to the crowd with his index and middle fingers raised, his other fingers cupped into a slight fist.

That wave is the traditional Catholic gesture of benediction, used to bless people, according to Emma Anderson, a University of Ottawa religious studies professor.

But, she added, people shouldn’t expect a lot of formalities or gestures like that when Francis comes to town.

“He’s much less formal than other popes we’ve seen in the past,” Anderson said.

The level of security for the Pope’s visit will be similar to when the prime minister or any other world leader travels abroad.

That includes police dogs and security checks for people who get close to him, including the 75 members of international media who travel on his plane.

“Just like the visit of any other world leader.”

Pope Francis doesn’t expect people to greet him with formalities or address him as “Holy Father,” the typical way a pope would be greeted.

“He seems to relish informality. This Pope doesn’t stand on ceremony,” Anderson said.

Francis arrived in Canada on July 24 aboard an ITA Airways A330 Airbus, a state-owned plane from Italy. To get around on the ground, he is driven in a white Fiat 500X, a subcompact car.

There are about 155 people who travel on the Pope’s plane, including the 75 reporters and 35 others who comprise the Pope’s staff, including medical and security personnel.

A hydraulic lift at the back of the aircraft is used to help Francis leave the plane, according to the Canadian Conference of Catholic Bishops. The 85-year-old has mobility issues and will use a wheelchair throughout his visit to Canada.

“It makes you wonder if this [trip] even would have been possible if he’d waited a couple months,” Anderson said.

Preparations are underway for his visit to Iqaluit, which is scheduled for a few hours in the late afternoon Friday at Nakasuk Elementary School.

He will meet privately inside with Indigenous survivors of Canada’s residential school system at about 4:15 p.m., before holding a public event outside the school. That event is expected to start at 5 p.m.

A ramp at one of the school’s entrances was being built Monday morning to accommodate the Pope.

The City of Iqaluit has also said Queen Elizabeth Way, between Sinaa Street and Mattaaq Crescent, will be closed to all vehicle traffic from 2 p.m. to 7 p.m. on Friday and people should expect further road closures and traffic interruptions.

The Pope apologized Monday to an audience of Indigenous people in Alberta on behalf of many members of the Roman Catholic Church for the “catastrophic” effects of Canada’s residential school system.

He made those comments at a ceremony on the former site of Ermineskin Residential School in Maskwacis, Alta., the second day of a Canadian visit.

He will stop in Quebec City before he ends his trip with his visit to Iqaluit on Friday.