Nunavut’s “enhanced surveillance” may have skewed the statistics 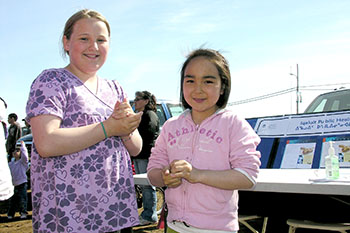 Nunavut may have given itself a bad rap when it comes to the H1N1 virus.

With 285 lab-confirmed cases as of Friday, June 26, the territory’s rate of infection appears to be much higher than anywhere else in the country.

The Northwest Territories, to compare Nunavut to a jurisdiction of similar geography, demographics and social conditions — and a larger population — has had only five lab-confirmed cases, the NWT’s acting medical officer Kami Kandola told Nunatsiaq News on June 19.

Given Nunavut’s social conditions, which include overcrowded housing, food security and diet issues, high smoking rates, and the prevalence of other lung diseases like tuberculosis and respiratory syncytial virus, high swine flu rates here are not surprising.

But perhaps Nunavut is not as much worse than other jurisdictions as those lab-confirmed numbers suggest.

And the catch may lie in that little qualifying phrase, “lab-confirmed.”

The NWT has a lot more than five cases of H1N1, Kandola admitted.

They’re just not lab-confirmed — because the NWT hasn’t done the same extensive testing as Nunavut.

At the beginning of the swine flu scare, she said, her staff tested anyone with symptoms who had a travel history, particularly to Mexico.

But once they realized the disease had reached Canada, they gave up on that, and began testing only people actually hospitalized because their flu symptoms were so severe.

They also asked for five test swabs a week from each of their health centres or emergency rooms.

Those were the federal guidelines, she said, and she understands that is what most other jurisdictions across the country have been doing.

Altogether the NWT has tested about 250 people, Kandola said — which is not many more than Nunavut’s 265 lab-confirmed cases alone.

Twenty-eight of Nunavut’s confirmed cases have been admitted to hospital, many at the NWT’s Stanton Territorial Hospital in Yellowknife. Eighteen of them have already recovered and gone home, Nunavut’s Department of Health and Social Services said in a June 26 release.

The point is, Nunavut spent about two weeks doing what its chief medical officer, Isaac Sobol called “enhanced surveillance” — sending swab samples to the lab for everyone who showed up at a health clinic with flu-like symptoms.

Sobol said he wanted to determine how the disease was spreading in Nunavut.

As of June 15, the department went back to standard surveillance, which means only testing one in five people who showed up at a health centre with symptoms.

Enhanced testing is no longer needed “because the treatment for H1N1 is the same as for other flu viruses,” the health department said.

Public health officials around the world agree that travel restrictions are not needed either, and the health department is not recommending the closure of institutions.

“In schools, daycares, homes and businesses, the flu virus can be killed by standard household disinfectants.”

At least one Iqaluit daycare, First Steps, is testing that advice. It closed for the day on June 18, after one staff person came down with symptoms, while the rest of the staff disinfected the premises.

“We just had to clean up the whole daycare with disinfectant,” said a spokesperson for the institution, who declined to give her name.

She said the ill person had a test swab taken at the hospital, but returned to work after her symptoms cleared up, even though, at press time, the lab results had not come back.

Public health has also been telling Nunavummiut with the flu to phone the health centre or hospital for advice, instead of going in.

That, along with reduced testing, means lab-confirmed cases in Qikiqtaaluk will likely never reach the levels of Kivalliq and Kitikmeot, even if the disease spreads just as widely, since only a fifth or less of possible cases are being tested now.

At press time, Health and Social Services was still unable to tell us the total number of tests it has had done.

Both territories send their swab samples to the provincial laboratory in Edmonton, known as provlab, for testing. It costs $400 a pop.

We don’t need to test everyone, Kandola said. If the mother in a household has swine flu, and then all four kids get sick, we know they have it too.

“Once you have confirmed H1N1 in an area, you don’t need to keep up extensive testing. You know it’s there.”

A higher priority than confirming exact numbers now, is the importance of slowing the spread of the disease — and not overwhelming the health-care system, adds Kandola.

“Stay home if you’re sick and call the community health centre,” has been at the core of Nunavut’s, and everyone’s, repeated public health advice.

Public health also suggests frequent hand washing, including the use of hand sanitizers at public events, and if you have to cough, do it into a tissue, or even your sleeve if nothing else is available.