More than 1,000 gather for Arctic science meeting in Ottawa

Researchers share results on hundreds of projects in Canada’s Arctic 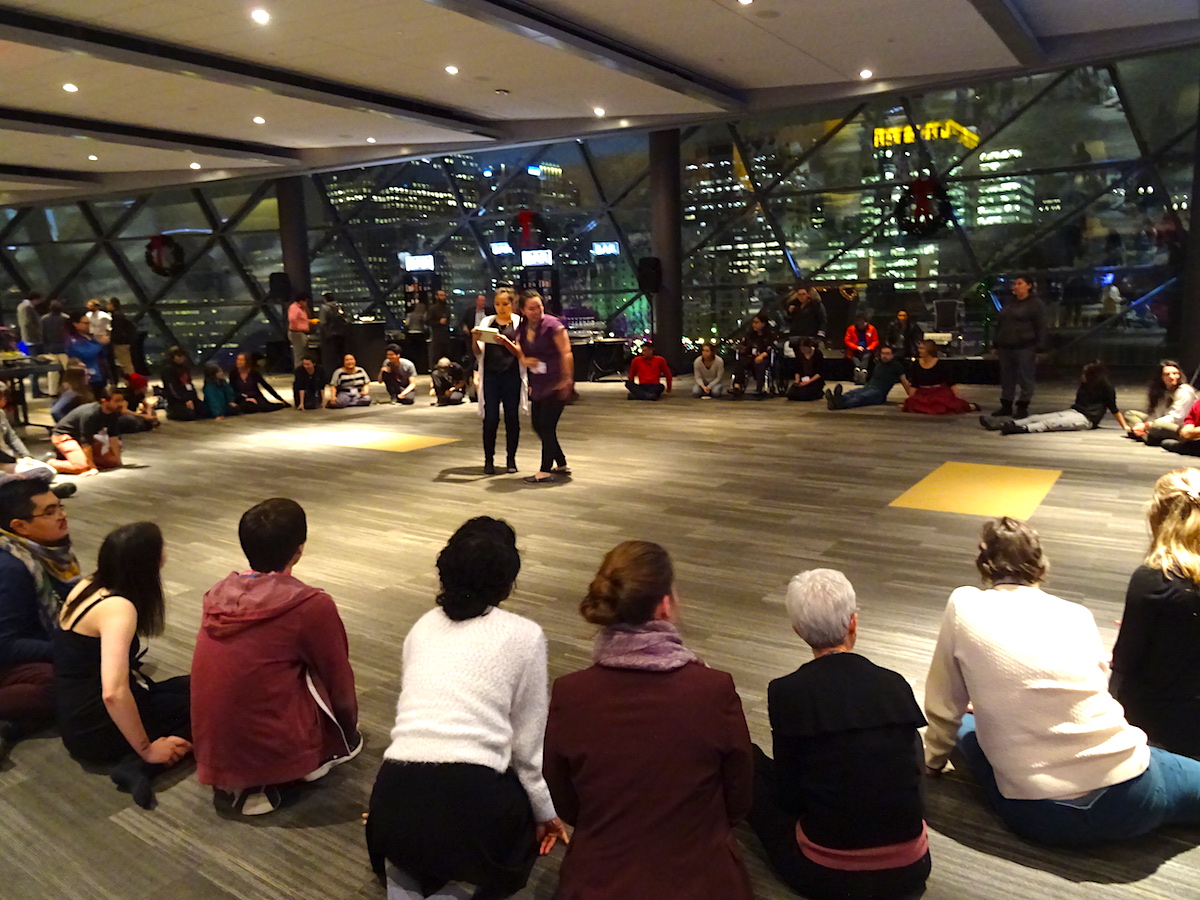 Researchers at the ArcticNet conference in Ottawa learn some Inuit games during a cultural night on Tuesday night. The conference, which got underway Tuesday, continues until Friday, with a packed schedule of talks, panels and research presentations. (PHOTO BY JANE GEORGE)

OTTAWA—If you think science is boring or doesn’t have much to do with your life, you may be surprised by what researchers are talking about this week at the ArcticNet conference at the Shaw Centre in Ottawa.

Topics so far have included a shrinking glacier on Ellesmere Island, generous food-sharing practices in Clyde River, and how recording bird songs can reveal changes in the circumpolar region.

These are just a handful of the roughly 400 presentations by researchers that will be heard at the conference, which will continue until Friday, and is attended by about 1,200 registered participants. Natan Obed, the president of Inuit Tapiriit Kanatami, speaks on Tuesday, Dec. 11, during the opening of the ArcticNet conference in Ottawa, reminding the crowd of Arctic researchers that “Inuit have a dominant interest in the Canadian Arctic.” (PHOTO BY JANE GEORGE)

Inuit scheduled to make presentations include Tim Anaviapik Soucie on how Inuit are working to improve drinking water in Pond Inlet, Mike Jaypoody on the Clyde River Knowledge Atlas, and Theo Ikumaq on Iglulingmiut weather and ice forecasting.

But non-Inuit are also presenting their research from Inuit Nunangat communities. For instance, a session on food security Tuesday afternoon looked at the sharing of store-bought food, or niqituinnaq, in Clyde River.

For her research, Magalie Quintal-Marineau from the University of Ottawa looked at sharing practices and strategies among Inuit women in this Baffin community—and what she learned could guide policies on food security in Nunavut.

The results reveal the strength and empowerment of women in Clyde River, said Quintal-Marineau.

She found that employed women in Clyde River sometimes spend as much as $1,800 a week to feed their families and to supplement country food from hunters. She also found that these women share with families directly and with others in the community, sometimes also allowing family members to use their store accounts.

“We feed our families. That’s what we do, what we’ve been doing to centuries. That’s what a woman does, feeding her family,” one woman told Quintal-Marineau, who made a point of thanking everyone who had spoken to her in Clyde River. A selection of cards depicting Arctic birds, by Nancy Saunders of Kuujjuaq, was on sale at the Eider Society display at the ArcticNet conference. (PHOTO BY JANE GEORGE)

Another session on Dec. 11, on Arctic ecosystems and wildlife, included a presentation on new Arctic bird research: Nicholas Lecompte from the University of Moncton spoke about his ongoing project to record bird songs in 55 places from Alaska to Sweden to offer new insights into how climate change has affected migratory birds.

A $50 recording device catches the birds’ songs for about five minutes every 30 minutes. These recording devices have been jumped on by polar bears and chewed by Arctic foxes—and they survive, although sometimes the quality of recordings has suffered from the interference of mosquitoes, Lecompte said.

Analyzed with the help of a computer program, these songs can tell many things about the birds, Lecompte said—for example, how many there were and when they arrived. The recordings can also tell researchers whether the birds are being affected by changes in the climate, such as earlier flowering of vegetation or rainfall.

In one of the larger conference rooms, hundreds of posters also offered a quick visual glimpse of research on various topics. You can see the shrinkage of a small ice cap near Tanquary Fiord on Ellesmere Island in this poster, presenting research by a team from the University of Ottawa. (PHOTO BY JANE GEORGE)

One showed how a small ice cap near Tanquary Fiord on Ellesmere island has suffered “irreversible mass loss, similar to other ice caps across Ellesmere Island.” It’s possible it will be gone by 2050, “or even sooner,” said researchers from University of Ottawa.

Many of the posters seemed to pick up on the messages of the 2018 Arctic Report Card from the National Oceanic and Atmospheric Association, released yesterday, which told of the second-warmest Arctic air temperatures ever recorded, the second-lowest overall sea-ice coverage and that “Arctic warming continues at about double the rate of the rest of the planet.”

ArcticNet, whose mandate is to bring together researchers and partners to prepare for global and climate change, faces challenges of its own this year.

Created in 2003, it’s headquartered at Université Laval in Quebec City and gets most of its money through the Networks of Centres of Excellence of Canada.

In addition to hosting the largest national conference on the Arctic and northern science, ArcticNet says it has helped thousands of students and researchers from 34 Canadian universities and has engaged 1,100 Inuit.

But its funding, more than $100 million to date, is due to end at the end of March.