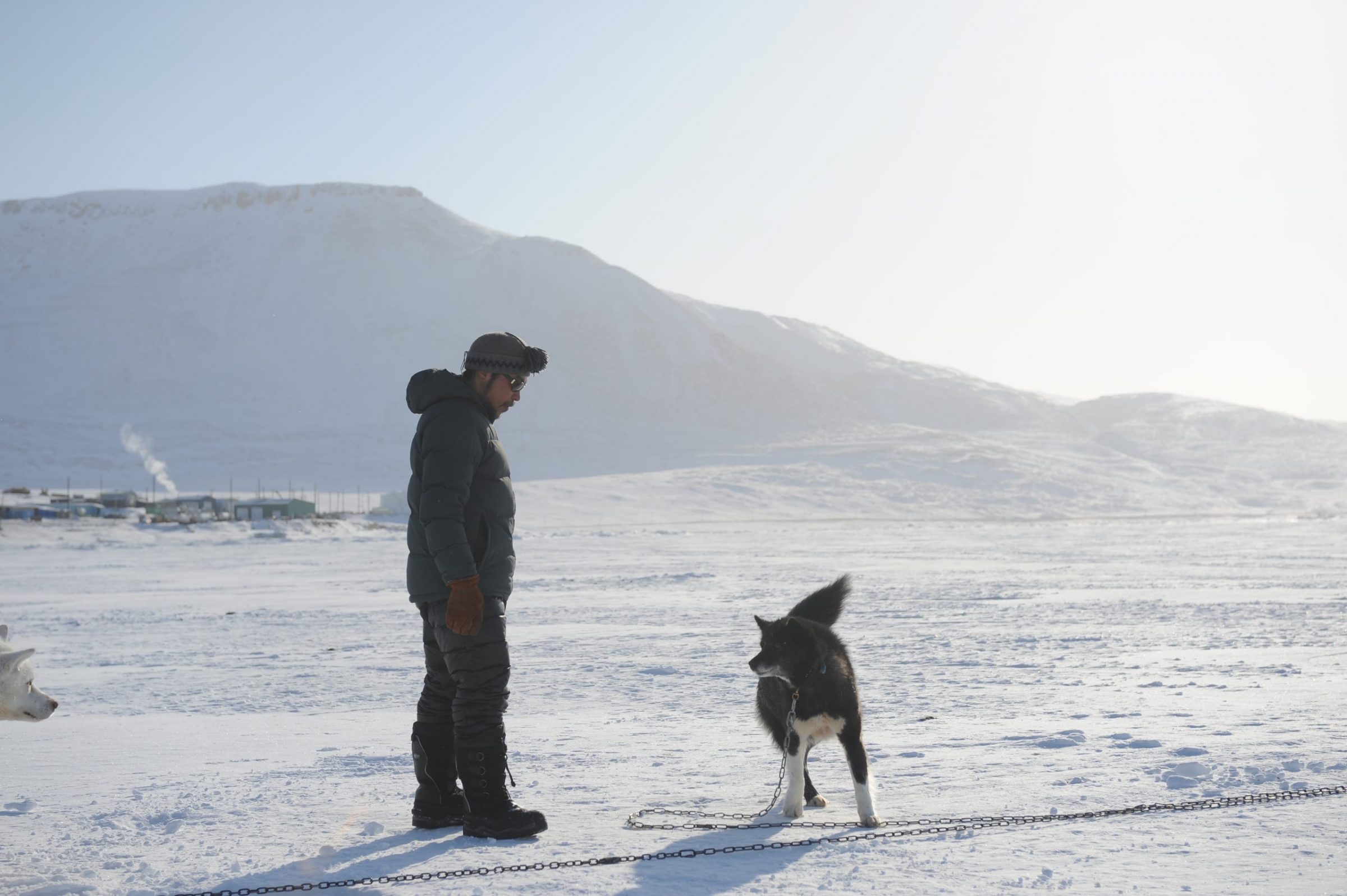 Arctic Bay musher Michael Qaunaq plays with one of his qimmiit, or sled dogs, Saturday morning after feeding his team a breakfast of Arctic char. (Photo by David Venn)

It took musher Terry Uyarak and his group five days and two abandoned snowmobiles to transport themselves and nearly a dozen qimmiit, or sled dogs, from Igloolik to Arctic Bay.

They left Sunday and had one beautiful day of travelling before the blizzards hit. But they arrived ready to compete in Nunavut Quest, the annual 500-kilometre dogsled race from Arctic Bay to Igloolik that starts Monday.

On the way, their first snowmobile broke down 130 kilometres north of Igloolik; the second when they were about to carry on. One of Uyarak’s teammates hitched a ride back to town with a nearby fisherman, got another snowmobile and met up with Uyarak later on the trail. 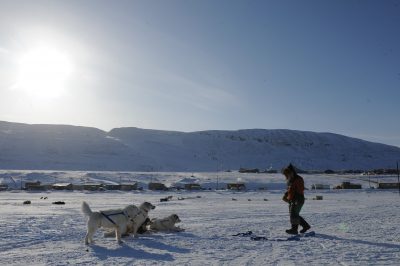 Igloolik Musher Terry Uyarak, one by one, moves his sled dogs from their harnesses to a chain locked into Uluksan Qingua, or Adams Sound. (Photo by David Venn)

Uyarak is one of 13 mushers who made it to Arctic Bay by Saturday to get ready for Nunavut Quest, which is taking place for the first time in two years. The competition has been on hold since 2019 due to the COVID-19 pandemic.

Uyarak brought a four-metre qamutik with him. It held at least five jerry cans, a bin full of Arctic char and his 11 dogs.

The snow was powdery, and their snowmobiles were working hard to navigate the terrain while pulling all their gear.

“I kept telling myself while I was coming here that my dogs are supposed to be pulling me, instead of me pulling them,” Uyarak said.

He and his team arrived in the hamlet at the northern tip of Baffin Island around 12:30 a.m. Friday.

Later that day, he took his dogs out for a 30-kilometre ride south of the hamlet. While travelling to Arctic Bay, Uyarak transported his dogs in a crate. Being confined to that box for five days had made them restless.

“They were really sick of it. [They were] not eating well, not exercising at all,” Uyarak said, shortly after shovelling a mixture of dog food and leftover beef stew out of a plastic bin and onto the ice.

The dogs nibbled at the food, but didn’t eat it up like they typically do after a run.

One of his dogs is in heat at the moment, too, which caused the males to fight and one of them to get injured. Uyarak had to leave her behind for their Friday practice run, while the injured male had limped and fallen behind the rest of the team.

Uyarak kept an eye on his dogsled team and said he hopes they are ready for Monday, when he and 14 other mushers from north Baffin Island begin the Quest.

Until then, Uyarak will be adjusting harnesses so they fit his dogs comfortably and don’t rub their armpits, as well as trimming the dogs’ nails and fur around their paws so there’s no ice buildup when they’re racing. 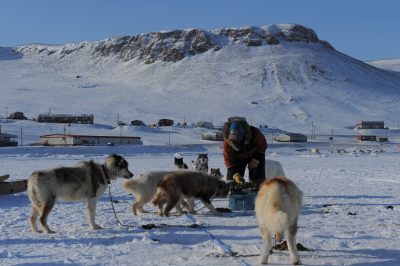 Musher Terry Uyarak of Igloolik places a heap of dog food and beef stew in front of his sled dogs on Friday after a 30 km practice trip. (Photo by David Venn)

Fellow Igloolik resident and musher Jonah Qaunaq had a much less strenuous time getting into town.

He left on Sunday too, and made it in by Tuesday around 8 p.m. He came with his wife, three children and two teammates.

Qaunaq is the reigning Nunavut Quest champ. A seven-time competitor, he won back-to-back races in 2018 and 2019. This year, his team is captained by a new lead dog, named Macho.

Since arriving in Arctic Bay, he has been riding with his dogs every day so that they’re in good shape. Qaunaq said they want country food, like walrus, seal or char, but they’re getting dog food instead.

He has also been spending time with his family, which is an important aspect of the race for him.

“[Nunavut Quest] is very special. Seeing our relatives and family — I have a sister and my nephews live here [and] it’s good to see them,” he said. “We can talk about dogsledding and hunting.” 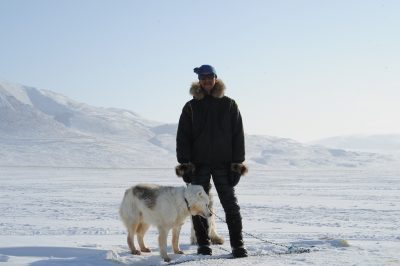 Qaunaq’s mother, who is a big supporter, will meet up with him and his family by snowmobile at some point during the race, he said.

He said his mother loves dogs because it was the main form of travel when she was younger, and that it’s special to participate in this competition with her.

Qaunaq still remembers the first time he considered himself a musher. He was five years old, riding with a sled and his puppy back and forth in town, not far from his house.

“I saw my mom on the stairs looking at me, and I saw two guys working … they were watching me,” he said. “That day I really remember myself: I was dogsledding.”

On Saturday morning, Michael Qaunaq, from Arctic Bay, brought out char for his dogs.

Next on his to-do list is to finish hand-sewing the harnesses for his dogs. 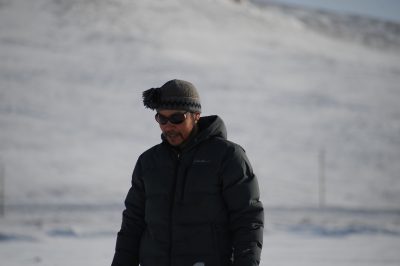 Michael Qaunaq, a musher from Arctic Bay, prepares for the 2022 Nunavut Quest. (Photo by David Venn)

Michael has been raising dogs for 13 years and participating in Nunavut Quest in the past five competitions.

He has more than a dozen dogs, but a few are either too young or too old to be on his Nunavut Quest team.

Two month-old puppies huddled in their den Saturday, only coming out when they saw the others eating char or they needed to urinate. Their mother sat above their boxed home. 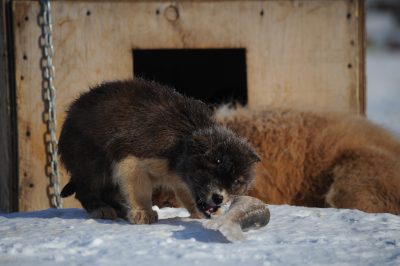 One of musher Michael Qaunaq’s puppies grabs a piece of char for itself Saturday morning in Arctic Bay. (Photo by David Venn)

The other two are less than a year old, and Michael has already begun training them. Maybe, he said, they can be on his team for next year’s quest.

But this year, Michael’s in it for the fun. His dogs are out of shape because he didn’t use them much this season, he said.

He’s bringing his younger brother and oldest daughter on the trip.

On Saturday afternoon, the 13 teams participated in a short race to determine positioning for Monday’s race start. On Sunday, the Nunavut Quest committee is to meet with the mushers to discuss logistics of the trip, such as when to start each day of the race.

On Monday, the mushers will depart for Igloolik. The first-place finisher will take home $20,000. The next six finishers will share $39,000 in prize money.