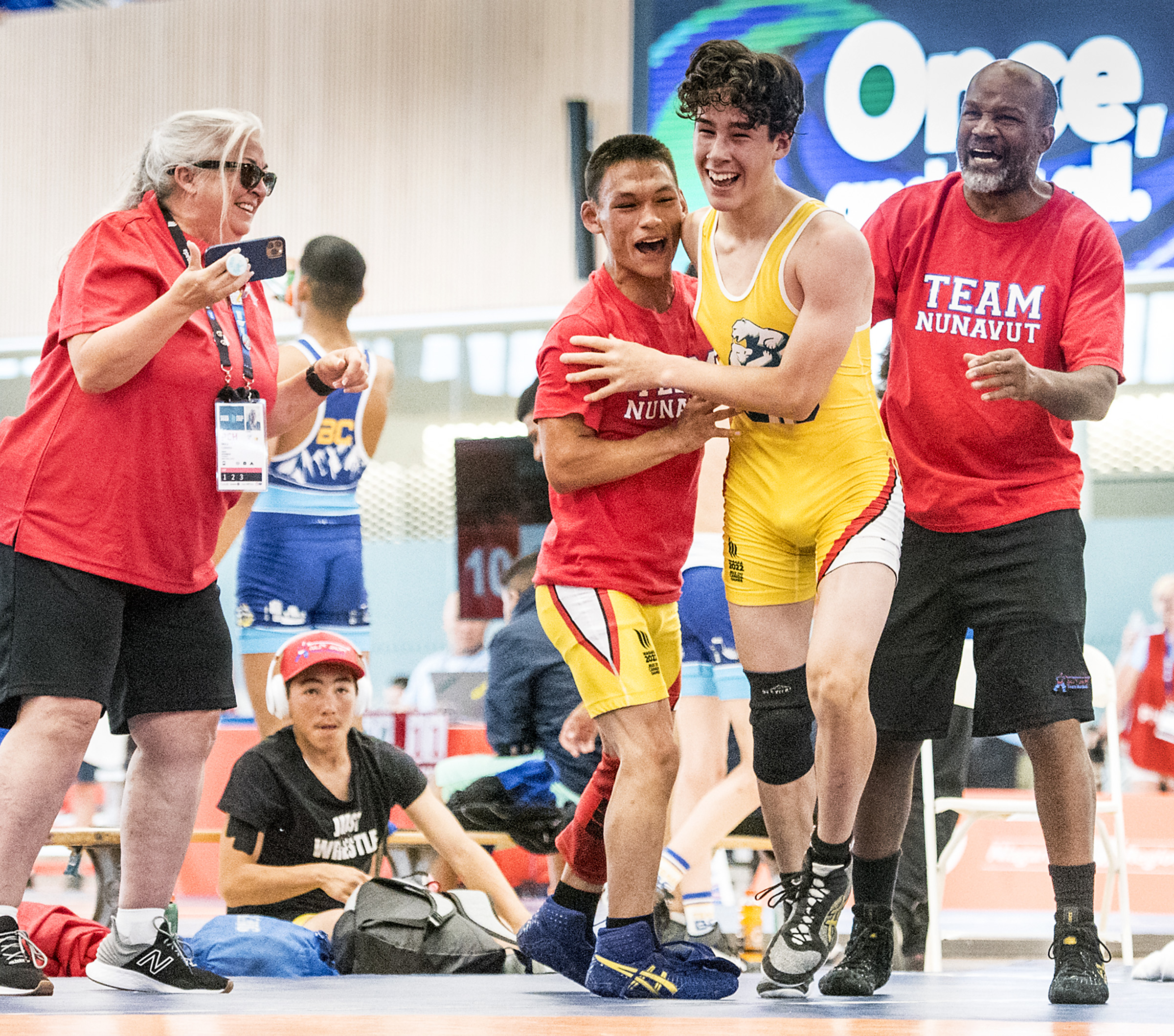 Team Nunavut’s Jusipi Dimitruk, in yellow, celebrates with teammate Eekeeluak Avalak and coaches Paula Cziranka, at left, and Chris Crooks after winning his match Wednesday at the Canada Summer Games. Avalak advanced to the final round in men’s wrestling Thursday morning. (Photo by Denis Cahill, special to Nunatsiaq News)

If Jusipi Dimitruk could freeze a moment in time, just one snapshot for his memories, this might be it.

Only 14 years old, he’s the youngest wrestler on Team Nunavut. He stands, exhausted but elated, in the middle of the mat Wednesday afternoon at the Canada Summer Games.

The referee is holding Dimitruk’s hand high in victory. On the sidelines, his teammates erupt from the bench to celebrate with him his first-ever match victory.

The crowd is cheering, it knows Nunavut is the underdog here. Dimitruk’s grandparents and two sisters are in the stands; they’re crying.

“My best match yet,” Dimitruk said in an interview a few minutes later, still winded from the gruelling contest that went on for five minutes before he ended it in the second round.

“A four-point throw (that sent his New Brunswick opponent Mackenzie Kearns onto his back) and then the nice pin at the end. This is only my third competition in my wrestling career, so this is unbelievable.”

Team wrestling events finished for Nunavut Wednesday. The men’s team beat Yukon to end the tournament in 11th place. The women’s team also faced Yukon, and could also finish 11th with a win.

On Thursday, individual events start and Nunavut’s Eekeeluak Avalak is a top-four contender in the 52 kg division. The games are being held in Ontario’s Niagara region, near Brock University.

Dimitruk, from Cambridge Bay, only started wrestling in 2019, taking up an offer from Chris Crooks, who is the head coach of Team Nunavut.

Nunavut’s Jusipi Dimitruk, in yellow, throws his opponent before pinning him for the victory Wednesday at the Canada Summer Games. (Photo by Denis Cahill, special to Nunatsiaq News)

“Chris was my teacher at the elementary school, and he got me into this running club where for every 10 kilometres you run you get a prize. I ran about 90 kilometres that year with my friends, and he invited us both to join wrestling.

“When I heard you could travel out of province for wrestling, and there’s tournaments where you get all this experience, it was interesting to me.”

It happened at the right time for him.

“I was 11 years old, I was 80 pounds. I hung around with the wrong crowd, I was smoking, drinking,” said Dimitruk, who goes into Grade 10 this fall. “It was pretty rough until I met them.”

“It was pretty rough.”

He said “having a mentor like coach, or someone to support me,” made a huge difference to him.

Crooks and his wife, Paula Cziranka, who also coaches the wrestling team, are retired teachers who moved to Cambridge Bay from Ontario about seven years ago.

That’s where they run a wrestling club where Crooks said they try to build character in the young members, as well as wrestling skills.

“With wrestling, I’m using it as a medium to try to move them beyond the trauma that is up North, and it has,” Crooks said.

“There have been a lot of disclosures, and you try to work through it … there have been kids that have turned their lives completely around.”

Next up for Dimitruk and the other Team Nunavut wrestlers is the Arctic Winter Games, to be held in January in Wood Buffalo in northern Alberta.

His three earlier losses at the summer games this week “were pretty harsh,” he said. Wednesday’s win was “probably the best feeling I’ve had in a long time.”

Wrestling has opened doors for him. He hopes to go to college or university in a few years and continue wrestling there.

“It’s only my second year and I’m already at the summer games. With more years of experience, I’m sure I could get much further,” he said.