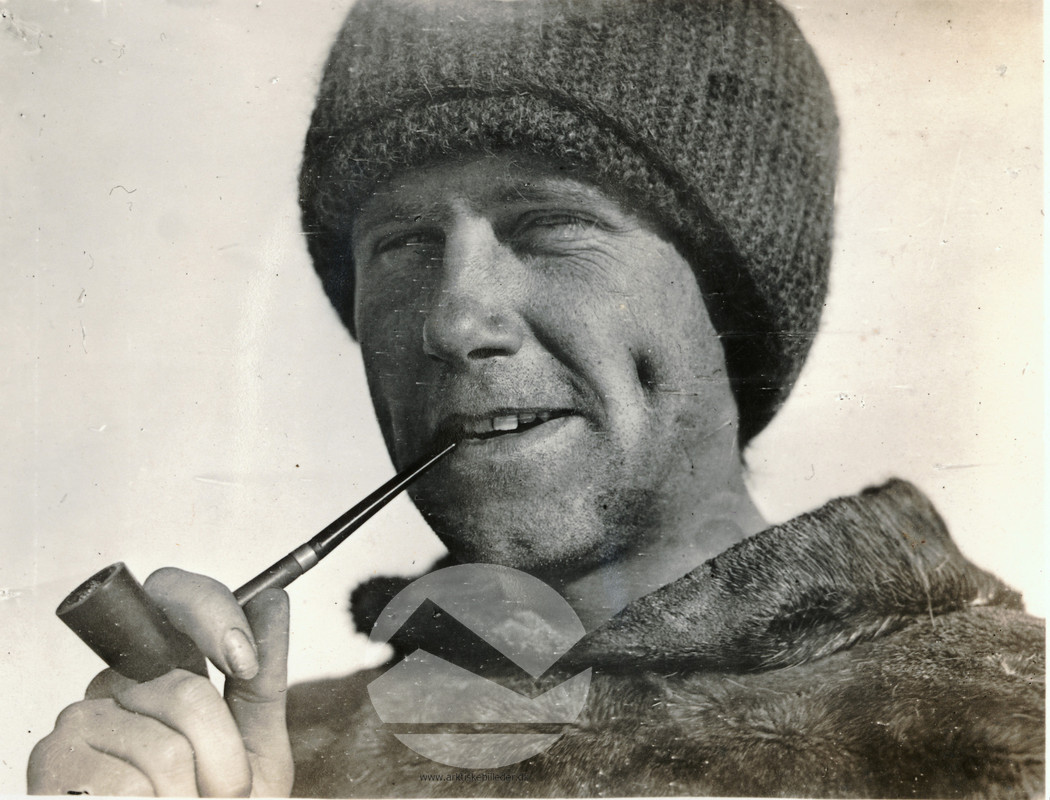 Kaj Birket-Smith, a member of the Fifth Thule Expedition scientific staff. Freuchen suggested he be consulted on the naming of the Thule Culture. Photographer: Therkel Mathiassen. (Photo courtesy of Arktisk Institut #147023)

George Comer was an American whaling master with an insatiable curiosity about the culture of the Inuit among whom he worked for so many years.

He whaled in the general area where the Fifth Thule Expedition was based, although two decades earlier. In 1915, he went for the first time to northwest Greenland as ice master of the George B. Cluett, a rickety ship on charter to Donald Macmillan’s Crocker Land Expedition.

In 1916, Comer, always interested in archeology and long a collector of artifacts for scientists, excavated a large midden in Greenland that became known as Comer’s Midden. He sent artifacts from those diggings to the American Museum of Natural History, where they were analyzed by Clark Wissler and described as symptomatic of a previously unidentified “Eskimo” culture.

Five years later, Therkel Mathiassen was the archeologist on the Fifth Thule Expedition. A graduate in geography and natural history, this was his first trip to the Arctic.

In 1922, he excavated extensively at what was called the Naujan site, near Repulse Bay. His investigations showed definitively that the culture whose artifacts he excavated there was the immediate precursor of that of modern Inuit, and differed from a previous culture, eventually known as the Dorset culture, which was not ancestral to the Inuit.

Naturally, Mathiassen was interested in what the newly identified or newly confirmed culture would be called. He decided early in his investigations it should be known as the Naujan culture, after the place where he had “found” it.

This caused some controversy among Danish members of the expedition. One of them, Peter Freuchen, decided to write to Thomas Thomsen, leader of the ethnographic department of the National Museum in Denmark, on the subject.

Thomsen was also a member of the expedition’s steering committee. Freuchen wrote his letter on May 16, 1923, when he was alone at Blæsebælgen, nearly two months after Mathiassen had left for Pond Inlet.

By that time, only Helge Bangsted and Freuchen remained at Danish Island, with four Inughuit, but Bangsted was away at the time.

“While today packing some boxes of collections, my thoughts turn quite natural to you and my fears are many … This brings me to the main topic of this letter: You will have heard of Mathiassen’s excavations at Repulse Bay; he is certainly making a grand thing of it — I cannot judge if it is not perhaps too much. It is always tempting for a young man, the first time he is out, to believe that he has created a world epoch.

“Now he has a new ‘culture.’ As this is the same as we found at Thule on the Second Thule Expedition, I suggested to him that we call it the Thule culture. It would thereby be forever linked to Knud’s name and to Denmark, but he is indeed unyielding with his ‘Naujan culture.’

“I would therefore ask you, as a committee member and as Knud’s friend, to propose to Mathiassen that he calls his discovery the Thule culture.”

Freuchen wrote: “It has often been clear to all of us on this expedition that, behind the many kind words from both sides, there has been a disagreement of disposition between the two. This is a shame for Knud and will not benefit Mathiassen in the least.

“But Mathiassen knows, and he knows that we know, that it would delight Knud to have the name of Thule linked to these ruin findings.”

Freuchen alluded to the fact that items of the Thule culture were first found at Thule and described by Clark Wissler of the American Museum of Natural History:

“Moreover, it should also be said that the items were first found in Thule and described (albeit badly) by Wissler; no honour will be taken from Mathiassen, and I would ask you to explain this to him. I beg you, however, to talk to Birket about it at first; he is a reasonable man.”

Freuchen’s letter was discussed by the expedition committee, whose chairperson, Marius Ib Nyeboe, wrote to Thomsen: “In particular, I am pleased that the name ‘Thule Culture’ strikes you as natural, and I hope you will support the proposal in that name, if Mr. Mathiassen should express a wish for the other name, as I said the other day.”

Mathiassen conceded, and in his preliminary report on the expedition he wrote:

“This wealthy old Eskimo culture … I will call the Thule culture; the reason for this name is that the first discovery of this culture is the one which was done by members of the Second Thule Expedition near the station at Thule in the Cape York District in North Greenland…; Then that the distribution of this culture across the American continent and the Arctic Archipelago has been demonstrated on the Fifth Thule Expedition.”

“The Thule culture, as we know it from these old finds, shows us a highly developed and remarkable Eskimo culture. It presents to us a people, living in permanent winter houses by the coast, in conical tents in summer, hunting the whale, the walrus, the seal, the bear and the caribou, trapping foxes, catching birds and salmon, all by means of a highly developed implement technique.

“They had all the typical Eskimo forms of weapons and implements: the dog sledge, the kayak, the women’s boat, the harpoon with moveable foreshaft, loose head and bladder; the ice-hunting harpoon …”

He went on to include a long list of technological items unique diagnostic of the Thule culture, and concluded:

“They mastered a highly developed proficiency in ornamentation and carving and were also familiar with the snow house. It is an Eskimo culture which, in many respects, is richer and more developed than that met with among the present day Central Eskimos. The Thule culture is by no means a primitive culture.”

This is the culture, defined by Mathiassen, that is ancestral to modern Inuit.