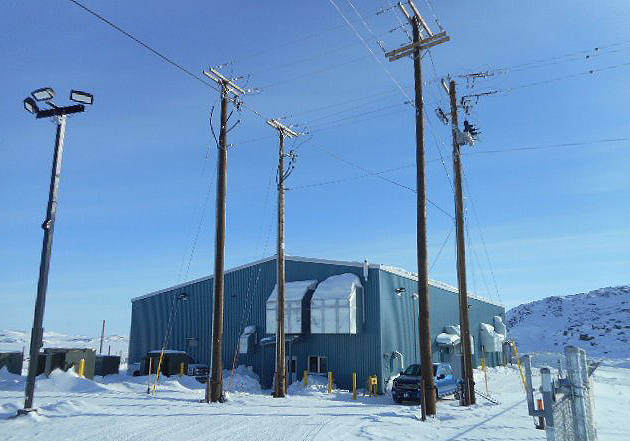 The new Cape Dorset power plant is quieter and cleaner than the old plant in the community core. Like all new QEC plants, it also has the capacity to accommodate other sources of energy as part of the corporation’s independent power production program. (Photo submitted by Qulliq Energy Corp.)

A new Qulliq Energy Corp. power plant in Cape Dorset, tucked away about two kilometres from the downtown core, is not only quieter for the community and more reliable, but also cleaner.

Since opening in December 2018, the new plant has been in the process of slowly replacing one of the oldest diesel power plants in the territory.

It was completed on time and within budget at $28.9 million.

As well as servicing a population of about 1,600 people currently, the new plant has the capacity to accommodate other sources of renewable energy in the future.

This new plant has 33 per cent more energy capacity than the old plant, which is still located in a busy part of the community.

The old plant remains there as a backup until QEC begins the decommissioning process this summer, says Pereira.

In a June 2015 report, the Senate standing committee on energy, environment, and natural resources found that 14 of Nunavut’s aging power plants had a life expectancy of zero years.

Since then, four communities, including Cape Dorset, have received new plants.

Two others, in Chesterfield Inlet and Gjoa Haven, have now exceeded their life expectancy as well.

As well, there is solar energy potential in the territory—particularly in the summer months and the southern areas of Nunavut.

QEC installed 11 solar panels at the Iqaluit power plant and integrated them into the local power grid. The company is now applying this approach to residents with its net metering program, which allows customers to connect their own solar panels to Iqaluit’s power grid.

Additionally, in 2016, QEC ran a study on wind power potential in Nunavut.

It found that Iqaluit would be the best location for a first large wind turbine project.

Sanikiluaq would be the best place to try a small wind turbine, the report says.

IPP Program to allow residents to generate and sell energy

Moving forward, any other new plants built will have the capacity to work in conjunction with QEC’s upcoming Independent Power Producer program, Pereira says.

QEC hopes to get cabinet approval in the summer to launch its IPP program this coming fall.

The corporation would then pay for the energy in line with what the cost of diesel would have been.