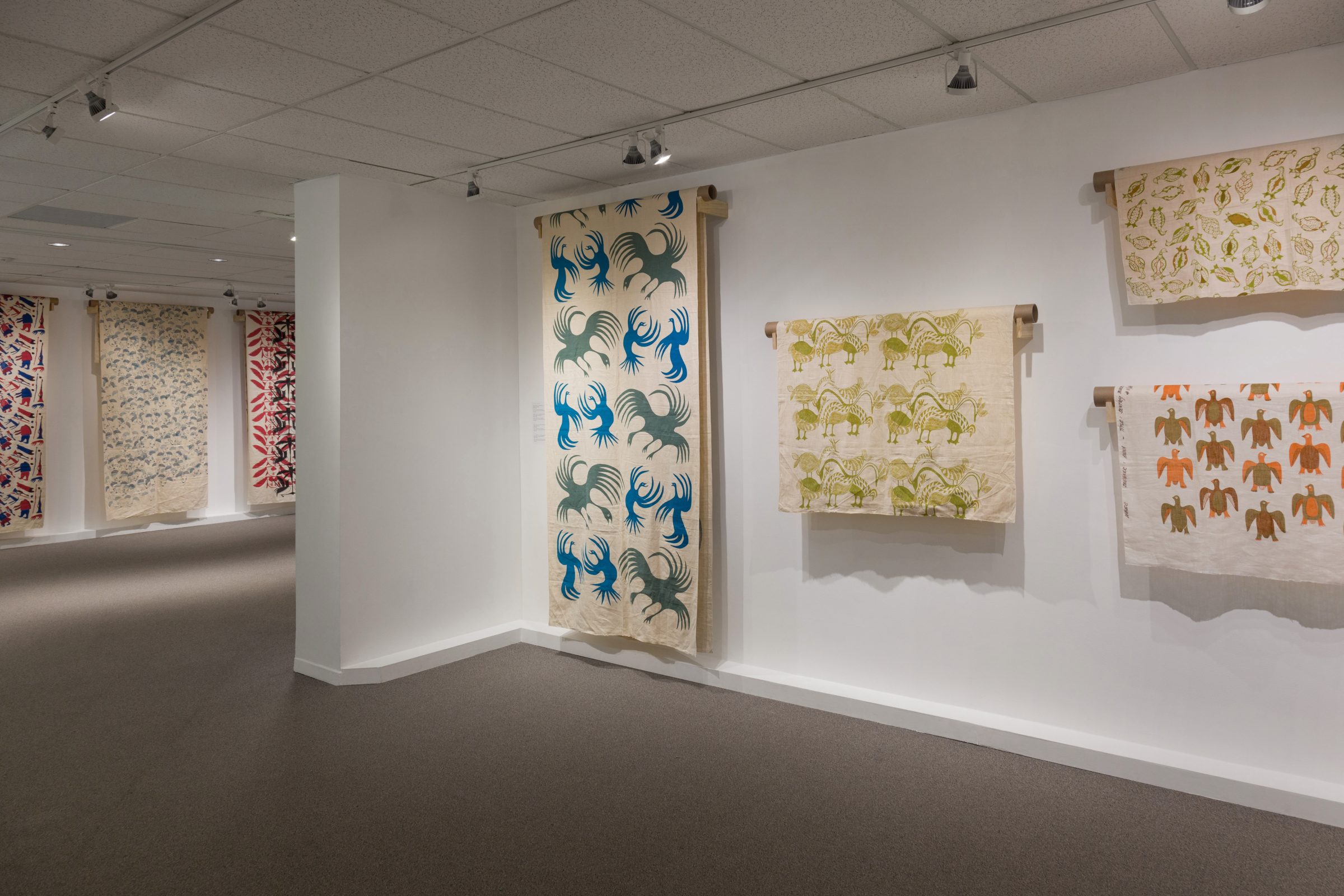 Nearly-forgotten textiles produced by Inuit artists in Cape Dorset are the focus of a new exhibition at the Textile Museum of Canada. (Photo by Darren Rigo)

A new exhibition at the Textile Museum of Canada in Toronto features a little-known piece of Cape Dorset’s art history.

The exhibition, called Printed Textiles from Kinngait Studios, opened Dec. 7 in partnership with the West Baffin Eskimo Cooperative. It presents the story of a group of Inuit artists who created a collection of bold graphic textiles in the 1950s and 1960s.

“There is very little information about this initiative. It was short lived, but it was a very important part of Inuit art and culture. The impact of this textile initiative is important on Inuit graphic art,” said Roxane Shaughnessy, the museum’s senior curator.

William Huffman, marketing manager at Dorset Fine Arts, said the idea for the exhibition came together when he stumbled upon a mysterious crate in a storage room at work.

“This show is literally an accident,” Huffman said. 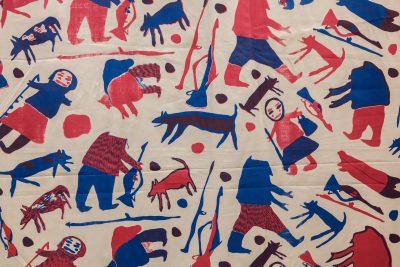 Inside that crate were piles of printed textiles made by Cape Dorset artists. Huffman said he called the assistant studio manager at the Kenojuak Cultural Centre and Print Shop and asked if he knew anything about the textiles.

“Apparently they were using them to clean off the printing presses. So I said stop doing that and send them to me right away. So they sent down in total, 200 objects. They’re in great condition because they were in a box for decades,” Huffman said.

Textile printing began in Cape Dorset in the late 1950s, around the same time artists were experimenting with print-making, Shaughnessy explained.

“In 1963, artists from the south came up and taught the printmakers how to silkscreen fabric. So that was another step in the evolution of this project, which really opened up and moved the production along,” Shaughnessy said.

During the same time period, Marimekko, a textile and design company based in Helsinki, was at its height. Huffman said he sees similarities between the Cape Dorset textiles and Marimekko’s work at the time.

“Finding these fabrics, having familiarity with the approach that Marimekko took to not only producing household items and apparel, but also the idea that you could buy yardage. All of this coming together… it’s hard to imagine that there wasn’t some kind of influence or crossover that allowed this to happen in Cape Dorset,” Huffman said.

In the mid-1960s, the Cape Dorset textiles began to be marketed by Arctic Co-operatives Ltd. across the country.

“There was a lot of expectation that this would be a very successful enterprise,” Shaughnessy said.

“It was a very receptive time for this type of work. They were marketing it to architects, interior decor, large public buildings and so on. That was the market they were aiming at. In the beginning it looked very promising,” she added.

The Cape Dorset textiles were so popular, in fact, that they were featured at Expo 67 in Montreal in 1967.

Many well-known Cape Dorset artists also made textiles at the time, including Kenojuak Ashevak, Pitseolak Ashoona and Pudlo Pudlat. Their works are part of the exhibition, Shaughnessy said.

But the textile-printing program in Cape Dorset ended in 1968 and has not been talked about much since.

If it was so popular, why did it end?

Both Huffman and Shaughnessy said the program likely shut down because of the high cost of purchasing and shipping materials.

“It did continue in the south. As much as they had hoped to keep the production in the North, where the studio and co-op could have control over their products and it would benefit those that lived there… unfortunately that did end in 1968,” Shaughnessy said. 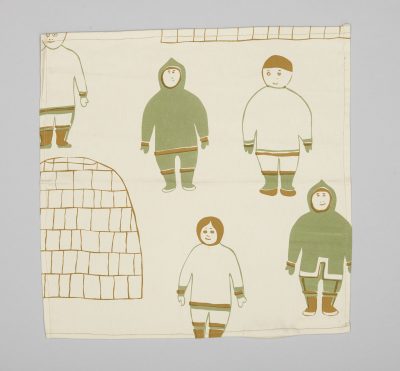 Shaughnessy began preparing for the exhibition in 2017 after Huffman found the textiles, which are currently on loan to the museum from the Co-operative.

Because so little was known about the textiles, Shaughnessy said she wanted to make sure people in Cape Dorset were involved in creating the exhibition.

During several visits to Cape Dorset, Shaughnessy worked with artists and other members of the community to try to identify the artists who created the textiles.

“There were very few, if any, who had seen [the textiles] before. We had identified as many artists as we were able to. There’s still the majority of the collection the artists are unknown.”

Shaughnessy said the museum also interviewed several Cape Dorset artists about the exhibition, including Johnny Pootoogook, Malaija Pootoogook, Ooloosie Saila and Ningiukulu Teevee. The recordings of those interviews are included in the exhibition.

Three Inuit fashion designers, Martha Kyak of InukChic, Nooks Lindell of Hinaani Designs and Tarralik Duffy of Ugly Fish were also asked to create pieces for the exhibition that responded to the textiles, Shaughnessy said.

As for the future of the collection, Shaughnessy hopes to tour it across the country and eventually bring it to Cape Dorset.

“There’s a lot more to do. This is an opportunity with the exhibition to really shine a light on the story. I think it’s also important to us that access to this collection is maintained, both in the North and the south.”

Images of the collection will also be available online in early 2020.

“It really was an opportunity to work with the community to bring the story back to Kinngait. Unlike the stone and ivory sculpture and the famous prints that are collected and appreciated the world over, the place and importance of these printed textiles in the history of Inuit cultural heritage is not fully been recognized,” she said.

“We’re hoping that the more visibility and awareness of them will change that in the long term.” 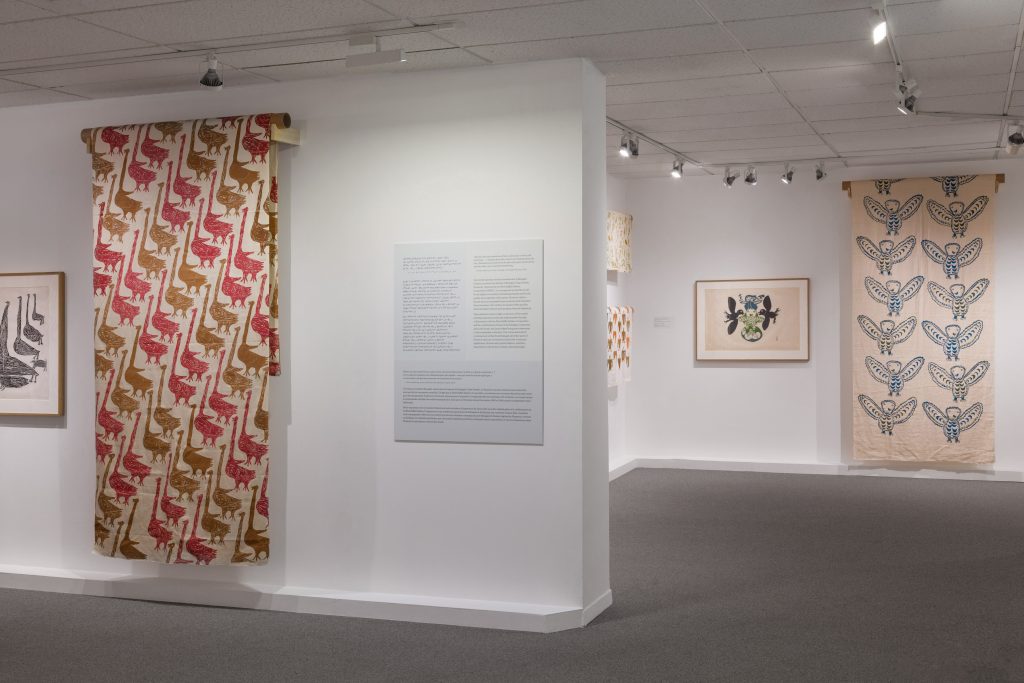