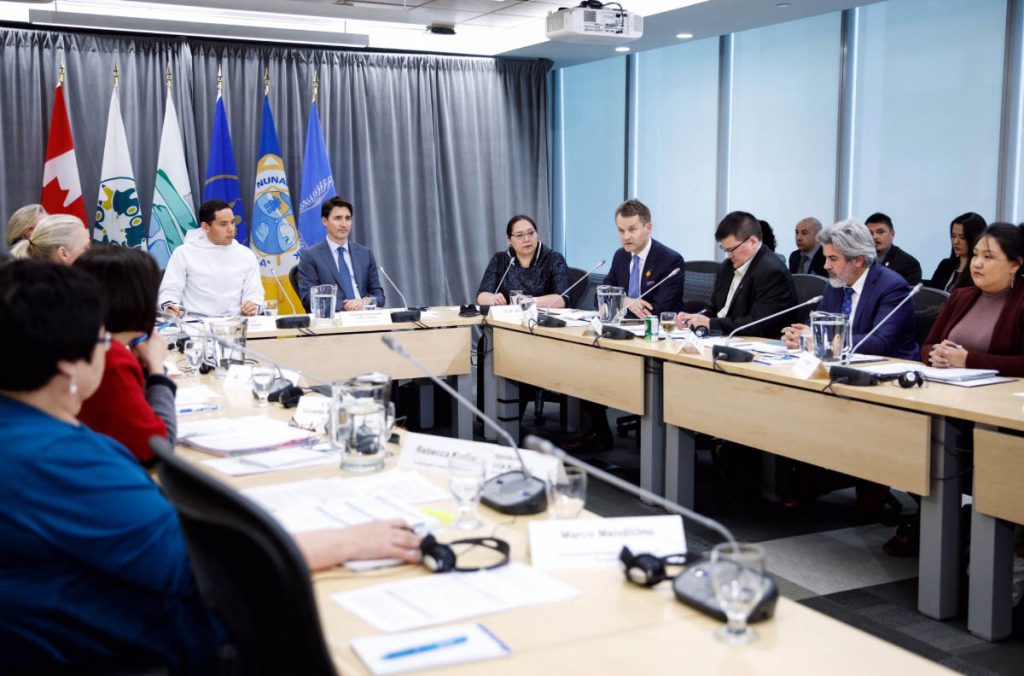 The new strategy highlights the urgent need for adequate housing across Inuit Nunangat, where over half of Inuit live in overcrowded housing, and where the vast majority of communities do not have a safe shelter for women and children experiencing family violence.

The report also notes that efforts to eliminate tuberculosis in Inuit Nunangat by 2030 will only succeed if housing outcomes across the North improve.

“Although significant, direct Inuit housing investments have been made by the federal government in recent years, the delivery of these funds has posed a number of challenges,” the strategy reads.

“Direct funding announced in [recent budgets] have been slow to reach Inuit, resulting in housing delivery delays that erode the overall effectiveness of these investments. Significant, multi-year advanced planning and preparation is required for the construction of housing in Inuit communities.”

To ensure the lasting impact of those investments, the new strategy says Inuit must be directly involved in both the delivery of funding as well as in housing-related decision making.

While recent housing budgets were directed to some regional Inuit organizations, like Makivik Corp. in Nunavik, the Nunatsiavut government and the Inuvialuit Regional Corp., the report noted that no direct investments were made to Inuit organizations in Nunavut.

Other calls for action included in the new housing strategy include:

• A regional needs assessment in year one of the implementation of the strategy, or as soon as practical, to develop a baseline and to better target investments to diverse regional needs.

• A labour force and skills needs assessment, with the goal of supporting Inuit filling jobs in the housing industry. 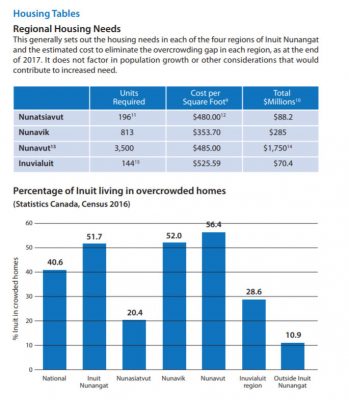 This graph shows housing needs broken down by different Inuit regions, as well as data on overcrowding in homes across Inuit Nunangat.

“Reliable access to housing is foundational to Inuit health and well-being,” said ITK president Natan Obed in a news release.

“The collaboration with the federal government on the National Inuit Housing Strategy which is being released today seeks to improve housing conditions across Inuit Nunangat and ensure better outcomes through greater Inuit self-determination and control.”

In the same release, Trudeau said his government was committed to finding “community-owned, community-driven solutions,” as outlined in the new housing strategy.

You can read the full housing strategy in English or Inuktitut on ITK’s website.

In recent months, the group has also endorsed the Inuit Tuberculosis Elimination Framework—its plan to eradicate TB among Inuit by 2030.

The committee has also co-developed the Indigenous Early Learning and Childcare Framework, which outlines the needs for care and education for Inuit children and youth.

The committee says it has now begun to look to new areas of focus this year, including efforts to address infrastructure gaps in Inuit Nunangat.