New LGBTQ society gets off the ground in Iqaluit

Positive Space Nunavut get $100,000 from feds to run programs and hold events 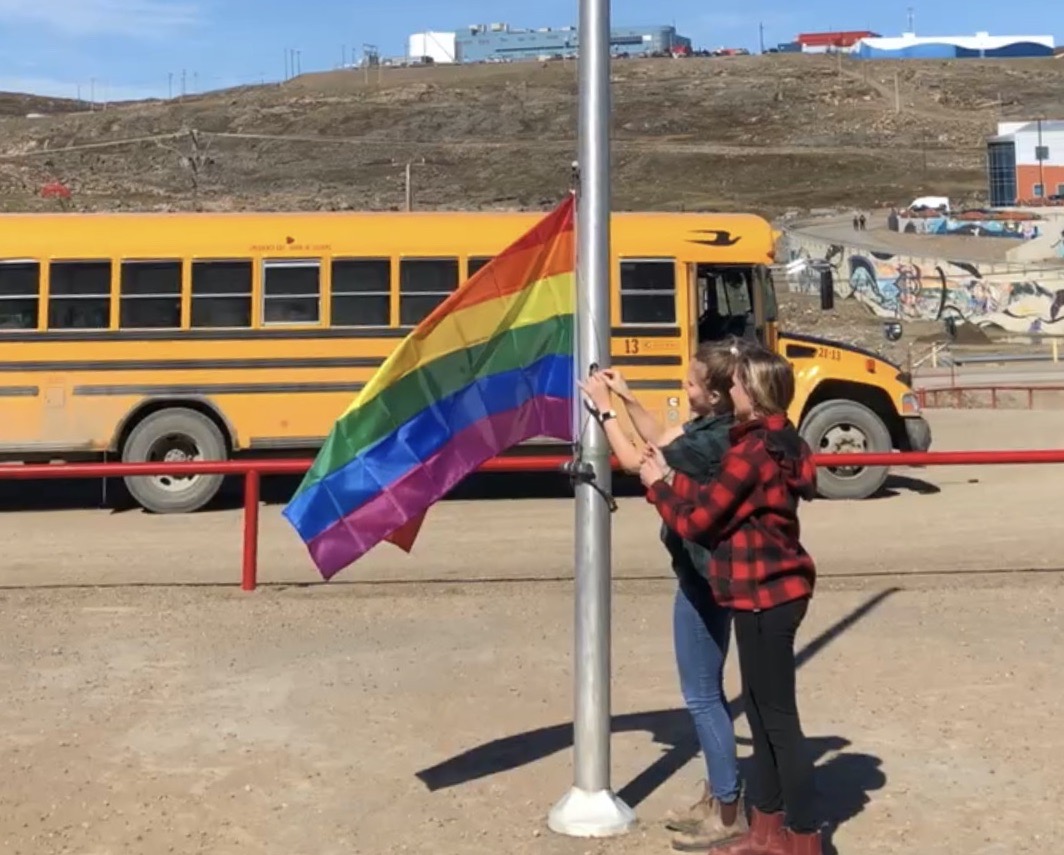 A LGBTQ Pride flag was raised at Inuksuk High School in Iqaluit in May 2019 to commemorate the 50th anniversary of partial decriminalization of homosexuality in Canada. (Photo provided by Bibi Bilodeau)

“Nothing actually reflects Inuit and the experience of coming out in a smaller community,” she said about the resources currently available to lesbian, gay, bisexual, transgender and queer or questioning people.

“We don’t want people to feel that they don’t have a place in their communities.”

Bilodeau applied for the funding last year because she wants to pay the people who contribute their time, personal experiences and knowledge to create better resources.

She said it’s important to pay for this work because she wants youth and community members to know their experiences matter.

Bilodeau grew up in Toronto and moved to Iqaluit about eight years ago.

“For some of us who have … found a home here, it makes us feel like this is something positive that we can contribute to the community,” she said.

Bilodeau said she often gets contacted by schools looking for someone to do workshops on gender and sexual diversity with their faculty. She does it on her own time, but hopes in the future, the society can hire queer youth and community members to do this work across the territory.

She said she also hopes the society can create a physical centre for LGBTQ youth, like there is in other cities.

For example, the Rainbow Coalition of Yellowknife opened a youth centre in 2016 and began offering support for adults the year after.

“These can create really great jobs for Inuit, who are on the sexual and gender diversity spectrum, that’s what I really want,” said Bilodeau.

Positive Space Nunavut is a branch-off of the Positive Space club at Inuksuk High School, where Bilodeau used to work. There, the club — which is still running — organized a Pride Week, a Pride prom and a LGBTQ flag-raising.

Since this was run out of the high school, outside community members or younger children were not able to attend the club’s events. That’s why Positive Space Nunavut, which is open to anyone, branched off from the school.

The $100,000 in funding came from Women and Gender Equality Canada, which announced money for 76 LGBTQ community-serving organizations across the country last week.

“The work done by LGTBQ2 community-led organizations like Positive Space helps shape a better, more diverse and inclusive Canada, where people are free to be themselves and to live their lives free from violence and discrimination,” state Maja Stefanovska, a spokesperson for the department.

Positive Space Nunavut has also received some money from the City of Iqaluit and has been approved to paint a rainbow walkway between the high school and the Arctic College, said Bilodeau.