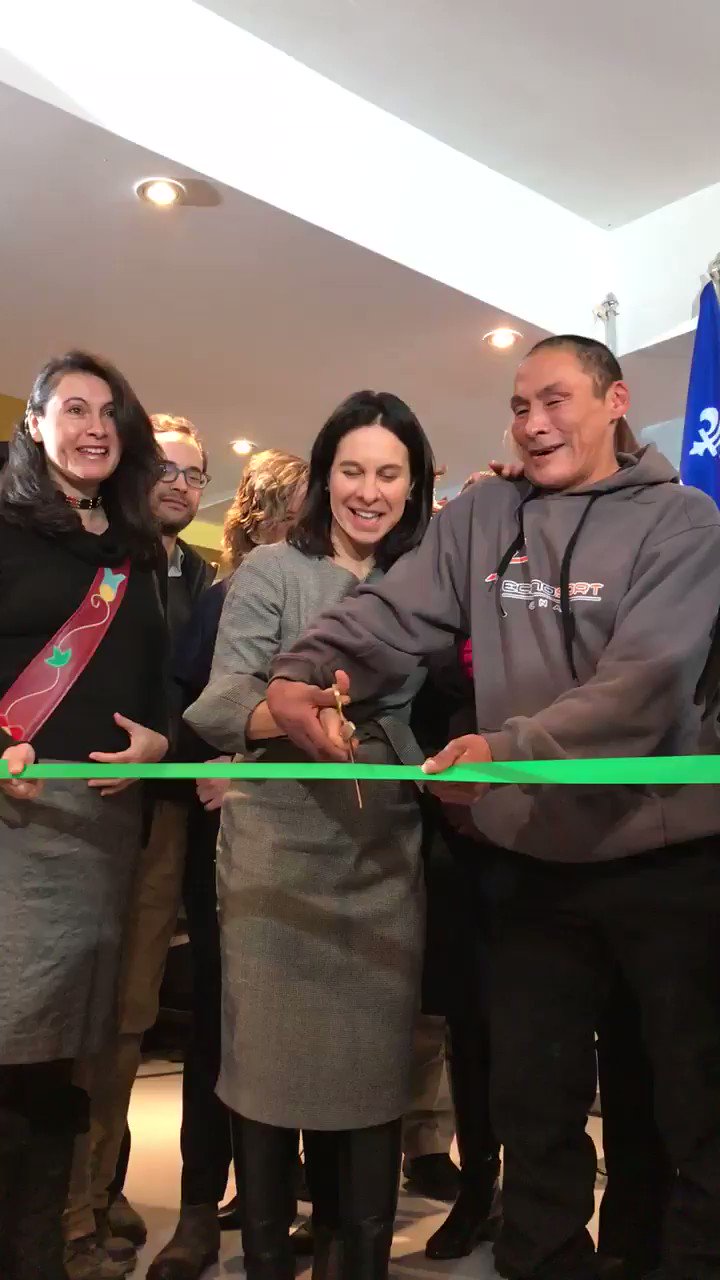 Montreal Mayor Valérie Plante and Putulik Qumak, who is originally from Salluit but has been homeless in Montreal for about 20 years, cut the ribbon to officially open the Resilience Montreal day shelter. (Photo courtesy of the City of Montreal)

When Montreal’s frigid winter temperatures start to set in, women and men who are living on the city’s downtown streets will have a new place to warm up during the day—the Resilience Montreal Day Shelter.

The shelter has been open for less than two weeks.

That’s right at the corner of Atwater Ave. and across from Cabot Square, which has long been a favourite hangout of Inuit who are in Montreal.

The shelter’s opening followed last year’s relocation of the Open Door day shelter, which served homeless people in the western part of the downtown core.

In this part of Montreal, Inuit and First Nations communities make up 40 per cent of the homeless population.

“We all know the challenges that Inuit and First Nations people face as they transition from their communities to the urban environment,” said Sylvie D’Amours, Quebec’s minister of Indigenous Affairs, at the shelter’s opening.

“I welcome the opening of Resilience Montreal with sincere joy and will continue to work with my colleagues to ensure a better future for Aboriginal people in vulnerable situations.”

The shelter plans to add to its services gradually, a news release on the opening said.

In the meantime, the shelter is getting ready for winter and recently put out a call for blankets:

WE NEED BLANKETS! Please send us an email at Resilience.montreal@gmail.com to donate some much needed blankets. As temperatures drop, it becomes more and more imperative that people living on the street have the… https://t.co/b0ya3FTQm8

Eventually, Resilience Montreal plans to offer a wide range of support and services, as well as meeting basic needs such as meals, showers and laundry, every day of the week, from 8 a.m. to 8 p.m.

More than $900,000 has been allocated for Resilience Montreal’s first year of operation. One-third of this amount comes from the new $5.25-million Montreal fund for homeless people, fonds Réflexe Montréal en itinérance.

Most of that fund’s money, about $3 million, will go to the establishment next spring of a wet shelter, where clients can drink under supervision.

“We must work together and think of everyone, especially our most vulnerable fellow citizens,” said Montreal’s mayor, Valérie Plante, at the opening.

Plante helped cut the ribbon with Putulik Qumak, who comes originally from Salluit, but has been homeless in Montreal for 20 years.

“The establishment of the Resilience Day Shelter will enable the homeless in Cabot Square area to obtain essential services adapted to their needs, particularly those who are Aboriginal,” Plante said.

The Resilience Montreal project involved the City of Montreal, the Ministry of Health and Social Services, the boroughs of Ville-Marie and Sud-Ouest, the CIUSSS of Centre-Sud- de-l’Île-de-Montréal, the Secrétariat aux affaires autochtones, the City of Westmount and Architecture Sans Frontières Québec.

The same partners are now working to find a more permanent shelter location, because the current lease is only for one year.