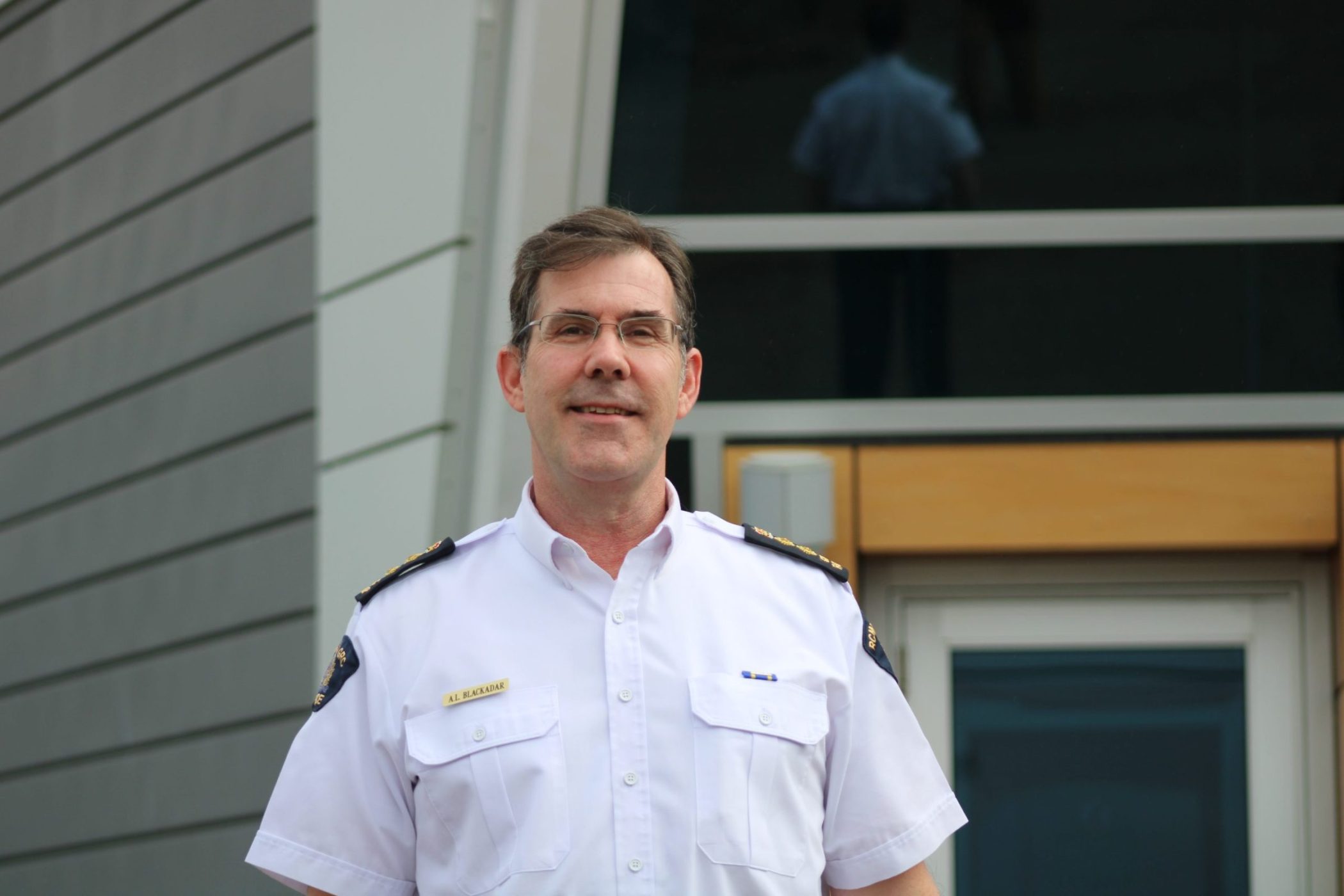 The RCMP’s new commanding officer in Nunavut, Chief Supt. Andrew Blackadar, said community engagement will be a priority for him. (Photo by David Lochead)

Working with Nunavut’s communities and building relationships between them and the RCMP is one of the bigger goals recently arrived Chief Supt. Andrew Blackadar has set for himself.

“Community involvement, engagement, and understanding the needs of the people are big priorities,” he said in an interview Friday at the Iqaluit detachment.

Blackadar took over as commanding officer of the RCMP’s Nunavut division — sometimes known as a V-Division — from former Chief Supt. Amanda Jones in late July, and he has moved up North after 32 years with the RCMP.

Many of those assignments were in small towns where his roles included work in recruitment, major crime units and media relations.

Coming to the Arctic was his choice, he said.

“I enjoy being close to communities, interacting with people … trying to problem-solve as a group and make [the community] a better place.”

However, Blackadar acknowledges the RCMP — the national police service — has a history of representing the policies and practices of larger government.

A long-running criticism of the force has been that officers from the south who move to the North have lacked understanding of the Inuit culture, which has led to unnecessarily aggressive handling of incidents.

To resolve that, Blackadar said he will make it a priority to listen to communities to understand what their expectations of police are.

One idea he said he likes is to create an advisory committee to help him make the right, culturally appropriate decisions. He hopes members from the communities could include retired special constables, mayors, youth and elders.

He said he plans to start work on this committee in the fall or winter.

Reaching true reconciliation is important, and it will take time, Blackadar said.

Recruiting Inuit to the service is also a challenge he’ll have to tackle.

Nunatsiaq News recently reported that just one of 21 Inuit who participated in an RCMP training program held in 2020 and 2021 applied to join the force.

Blackadar said ensuring that recruitment programs are regionally focused should be a part of the solution. He pointed to the example of the national recruiting program being online-focused, which is a challenge in Nunavut due to weaker internet service.

“We have to adapt the way we deliver our programs,” Blackadar said.

A big piece to recruiting is ensuring local hires have a greater say in where they are stationed, he said.

Another task for Blackadar in his new role involves the recent announcement that the chairperson of the Civilian Review and Complaints Commission for the RCMP, Michelaine Lahaie, will be reviewing how Nunavut RCMP handles the public complaint process.

Blackadar said he welcomes that review, and will meet its team at the end of the month. He said there is also good work being done by the RCMP in Nunavut and hopes that does not go unnoticed.

As for how long Blackadar is stationed in Nunavut, he said his stay is indefinite.

“It’s an honour to be up here as the commanding RCMP officer in Nunavut,” he said.