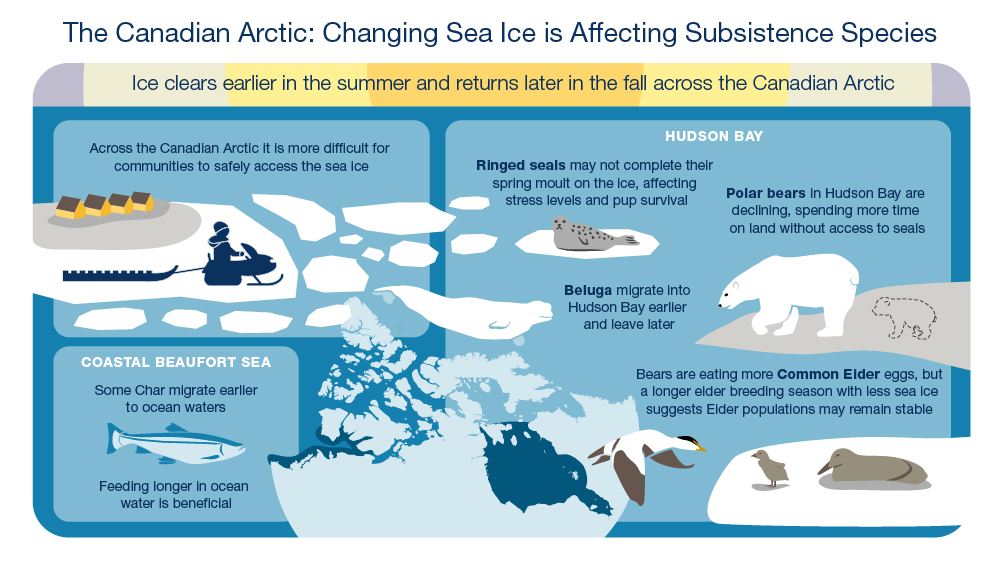 A recent report released by the federal government takes stock of the Arctic Ocean and the environment it supports. This figure from the report illustrates how subsistence species are being affected by changing sea-ice conditions. (Image courtesy of Fisheries and Oceans Canada)

Inuit traditional knowledge has shown that gradual change in the Arctic Ocean has always occurred, but it has also illustrated that this critical environment is now changing at a rapidly increasing rate.

Combining Inuit knowledge and scientific study, a recent report released by the federal government takes stock of the Arctic Ocean within Canadian borders and how that ecosystem is in flux.

Co-authored by Fisheries and Oceans Canada, Environment and Climate Change Canada, the Government of Nunavut, and the Fisheries Joint Management Committee, the report focuses on sea-ice change and how the ecosystem it supports has shifted as a result of those changes.

Over the last 10 to 20 years, sea-ice change has varied across the Canadian Arctic.

And in some parts of the High Arctic, the thickness of old multi-year ice has not increased since the 1970s.

Canada, though, is losing less old ice than other polar regions because wind currents bring that ice, broken off from foreign shores, to rest at the northern border of Canada’s Arctic.

Sea ice is an important platform for several mammals across the Arctic.

The early breakup of sea ice prevents ringed seals from shedding and regrowing body hair through moulting, which can make them more susceptible to disease.

And the warmer ocean water can overheat the animals relied upon by Inuit. In 2010, a particularly warm year, ringed seals were stressed by the environment and had fewer pups in the years that followed.

The loss of ice has also been linked to a decrease in the weight of polar bears, which use the ice as hunting platforms.

As a result, their diets have been seen to change with the availability of food. For example, they’ll eat more common eider eggs found on land when ice-dwelling seals aren’t available.

Interestingly though, those common eiders, whose eggs are the target of hungry polar bears short on seal, are actually benefitting from longer periods of open water, during which time they breed. By producing more eggs, the eiders offset the numbers taken by polar bears.

As well as seeing the effects on the mammals they hunt, Inuit have reported changes in sea-ice conditions that affect their hunting. Unstable and unpredictable sea ice has made hunting out on that ice, or travelling along it, precarious.

After many years of hunting at the floe edge, where the pack ice meets land-fast ice, Inuit have confirmed that the floe edge is moving in closer to land.

A change being witnessed in many coastal communities is how a lack of sea ice buttressing their shores has allowed strong winds to whip up open water. That water batters the shoreline, eroding the land upon which communities are built.

Less ice in the Arctic also means more access for ships to this environment, as well as for marine mammals whose routes are shaped by the ice. Killer whales are sighted by Inuit in the eastern Arctic more and more often every year and this is changing the behaviour of local species the whales hunt, such as narwhal.

The rate at which orca kill Arctic mammals, the report said, could be high enough to affect Arctic marine mammal populations.

The quality of the Arctic Ocean is also in flux, and long-term satellite data has illustrated some root causes. 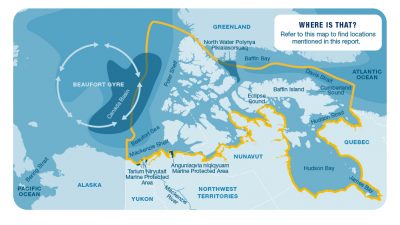 The Beaufort gyre, indicated on this map, is a system of rotating water that is a significant source of freshwater in the Arctic Ocean as a result of maintaining a clockwise rotation for more than 19 years. (Image courtesy of Fisheries and Oceans Canada)

An example of this is the Beaufort gyre, the rotating top layer of water over the Canada Basin in the Beaufort Sea beyond the continental shelf. Every five to 10 years, the gyre shifts between rotating clockwise and counter-clockwise.

As of 2017 data, it had been rotating clockwise for the past 19 years. The result of this sustained motion is freshwater from rivers and ice melt accumulating in the gyre—33 per cent more freshwater than in 2003.

This freshwater forms a barrier to the rise of nutrients in the ocean layer just below the surface, which is fed by waters from the Pacific Ocean.

This affects the production of phytoplankton, a base species for the Arctic food web.

As the ice melts every year, it triggers the growth of phytoplankton that rely on sunlight reaching the water to grow. This in turn begins a cycle for larger organisms, which are fed on by fish, which are then fed on by marine mammals.

The report explained that with less ice cover on the ocean and an earlier melt, the marine food web could be more reliant on this phytoplankton growth than it is on algae that form in the ice.

However, fluctuations in the availability of nutrients needed for phytoplankton growth—nitrate in particular—also affect any potential increase in its formation.

Most of the nutrients that phytoplankton needs to grow are found in the Pacific Ocean layer—approximately 150 metres deep. 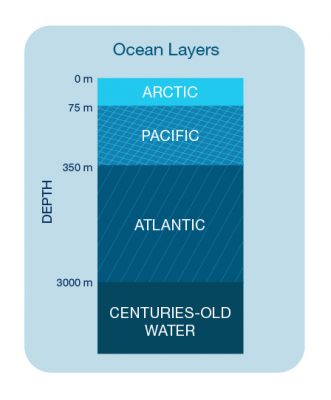 In the central Beaufort Sea, that layer has been sinking, meaning those nutrients are further away from the surface and the sunlight required for phytoplankton growth.

But elsewhere, near the continental shelf in the Beaufort Sea that edges the mainland shore, that Pacific layer is rising closer to the surface.

With so much variation, there are no predictions made for an increase or decrease of phytoplankton across the Arctic Ocean, the report said. But any change will set off a cascade of effects through the food web.