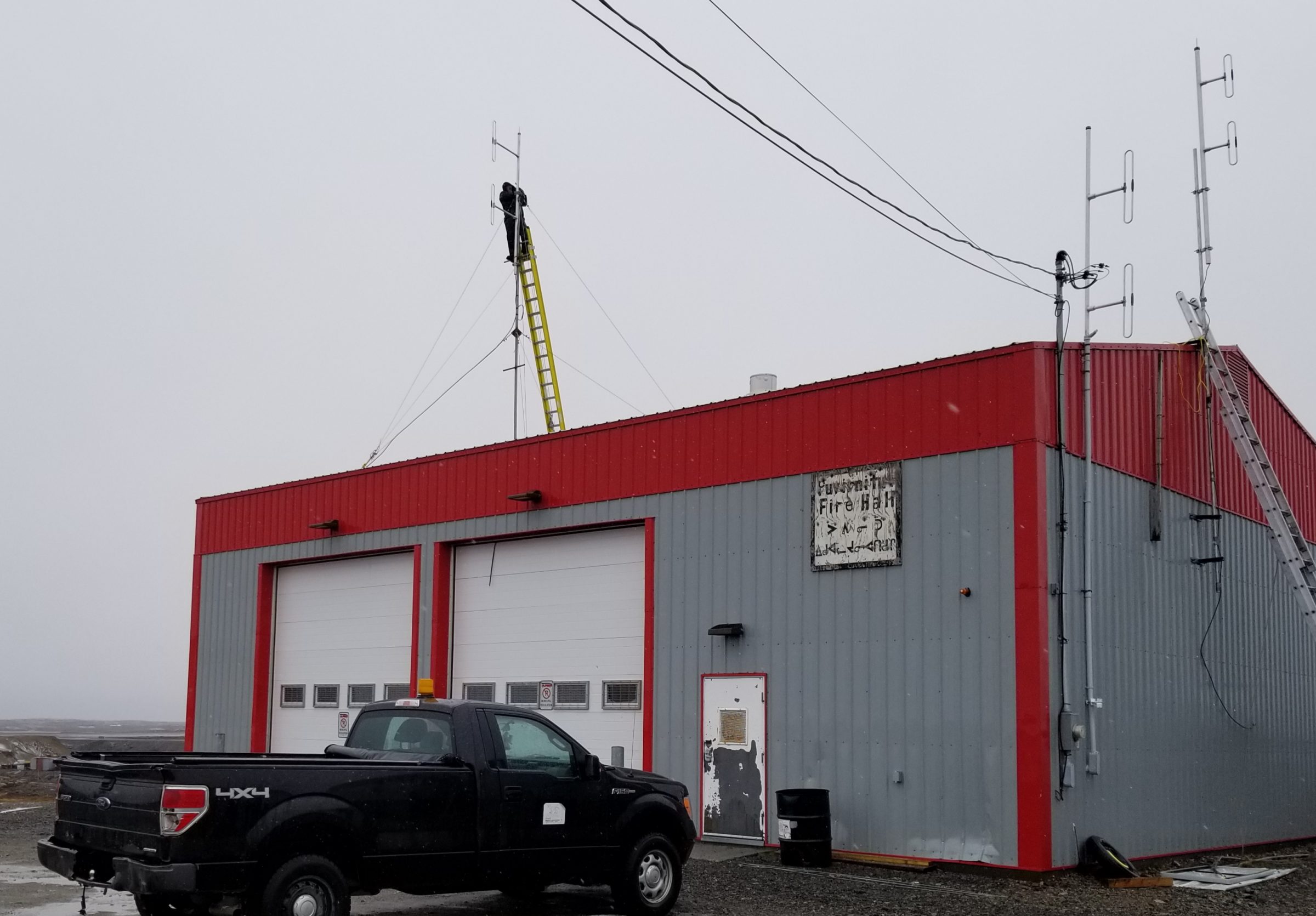 The main tower of a VHF communication system was installed on the roof of Puvirnituq’s fire hall this summer. (Photo courtesy of Marcel Mifsud)

Hunters in Puvirnituq will have an easier time staying in touch while out on the land, thanks to a new VHF radio tower that now sits on the community’s fire hall.

There are plans to install two more towers. But, already, the project is being put to good use.

“I’ve heard people saying that it’s much, much more convenient to be able to hear each other on the radio,” said the village’s secretary-treasurer, Sarah Beaulne.

“My family goes on the land and they’re at their summer camp right now and whenever they’re arriving to the community.… I can hear them half an hour away from here, so we can get prepared and get the trucks ready to go meet them.”

Before this, Beaulne said, she’d be on the lookout in town to spot them arriving at the entrance to the bay. “Now they can just radio saying, ‘We’re arriving in a half hour.’ It’s so convenient,” she said.

The VHF communication system was decided on by the village council and funded through the Hunters Support Program. A second tower will be installed on an island 30 kilometres north of Puvirnituq next year, and the third in 2021 will be erected south of the village.

Kangirsujuaq-based company Jaaka Mifsud is installing the towers, after putting a VHF communication system in its home community five years ago. Hearing of that project in Kangirsujuaq moved Puvirnituq’s council to also go ahead with their own, said Beaulne.

“Five years ago, the Northern Village of Kangirsujuaq asked me to make sure that the hunters and their families that are spending nights at their hunting and fishing camps can have access to the local radio station,” said Marcel Mifsud, who co-owns Jaaka Mifsud with his son Couché Jaaka.

He then heard from the Kativik Regional Government that it wanted to connect Pingualuit National Park, about 120 kilometres from Kangirsujuaq. “We were assuring the visitors and the park staff that they will be in security wherever they were travelling,” Mifsud said.

The system works through a main server in the community that receives and sends messages. This is located at the highest point in the village—in Puvirnituq’s case, that’s the fire hall.

Receivers are then placed outside the village based on the different routes hunters use, at distances between 30 and 50 kilometres, depending on the landscape. Because the area around Puvirnituq is significantly flatter than that of Kangirsujuaq, Mifsud said they’ll have a wider range.

The VHF system is powered by wind and solar energy, and works with walkie-talkies, Mifsud explained, that cost between $100 and $200. While greater range can be reached with an HF receiver radio, he added that these can cost between $1,500 and $2,000.

“We’ve always had communication accessible through HF radio systems, but these, this VHF is on handheld walkie-talkies, a handheld device, so it is a lot more accessible,” said Beaulne. “You can bring your walkie-talkie anywhere and you don’t have to set up your wires like the HF radio.” Through the Hunters Support Program, beneficiaries also get a 50 per cent discount on equipment, including these walkie-talkies.

Once the final two towers are installed, the current range of about a 40-kilometre radius around the village will grow to 100 kilometres. This added range will allow different groups out on the land further from Puvirnituq to connect, as well as with those in the village.

“When people are out by Honda on the west side of the community, we hear them a lot as well,” said Beaulne. “‘Where are you? Where can I meet you? Where are there a lot of fish?’”