Greenland academy could serve as model 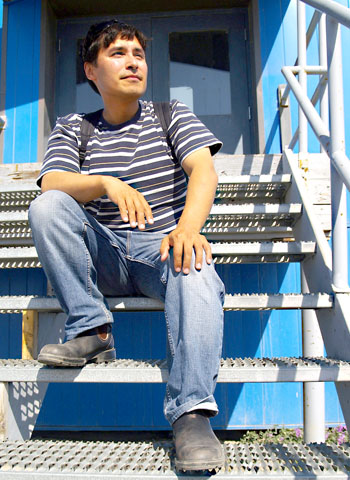 Nunavut’s former Liberal candidate, Kirt Ejesiak, has joined with four other Iqalungmiut to push for the creation of a university in Nunavut. (PHOTO BY CHRIS WINDEYER)

He’s the father of a new baby girl, he’s building a house, overseeing Iqaluit’s October municipal elections, and on top of that he’s trying to found a university.

They hope an Iqaluit-based university could become a clearinghouse for Nunavut-based scholarship and activism, and help inject an Inuit perspective that’s sometimes ignored in discussions on Arctic issues such as mining, sovereignty and climate change, Ejesiak said.

“What is really missing [in Nunavut] today is a healthy debate,” Ejesiak said in an interview. “All of our experts are based in Vancouver or Calgary or anywhere else on the planet.”

Ilitturvik could serve as a home for critical thought in the territory, where academics would have the freedom to speak out and criticize the Government of Nunavut or regional Inuit organizations when criticism is needed, Ejesiak said.

Sometimes people who work for those bodies feel intimidated about speaking up on issues, because people have been fired in the past for speaking out, he added.

“I think that’s quite unhealthy for a society. It’s important that we have that debate.”

And with the federal government pouring millions of dollars into Arctic research, Ejesiak said an Arctic university could conduct some of that research, giving Inuit greater control over the results and access to them.

The society envisions a “bricks and mortar” university with a campus located in Iqaluit.

Admissions would be open to everyone, but with a priority for students from Inuit Nunaat. Likewise, Ejesiak said “ideally it would be northerners” who would make up the faculty, but acknowledged a fledgling school would likely need some outside help.

But Ejesiak, recently returned from a fact-finding trip to Greenland with Aaju Peter, said the government-funded university, Ilisimatusarfik, which has 150 students and 14 faculty, could serve as a model.

“They’ve tackled a lot of the same issues we’re tackling here,” he said.

The next step is a feasibility study and Ejesiak the group is seeking $50,000 to conduct one.

There are a number of groups already pursuing the idea of an Arctic university, and this past spring, during a visit to the Arctic, Governor General Michaelle Jean renewed her calls for a university North of 60.

Ejesiak said he doesn’t think the Ilitturvik University Society is working at cross-purposes and is open to the idea of collaboration with other groups.

And with so much on his plate, Ejesiak also announced last week he won’t run again as a Liberal candidate in the next federal election, which could come as early as the fall, according to some media reports.