“We don’t want it to be like a hospital” 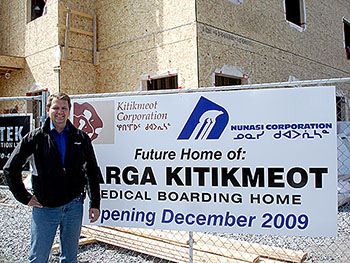 Tim Zehr, the president and COO of Nunasi Corp., stands in front of the future Larga Kitikmeot patient residence, which will be a homey place, he promises. (PHOTO BY JANE GEORGE)

YELLOWKNIFE — You can’t miss the striking three-storey building under construction at the corner of Franklin and Matonnabee streets in downtown Yellowknife.

It’s to become the new Kitikmeot patient boarding home, and, by next week, the windows should be up and, not long after that, siding will cover the exterior.

The future patient residence, to be called Larga Kitikmeot, should be ready to receive its first residents by the end of 2009.

The $6-million complex is much larger than the current 43-bed Lena Pedersen patient boarding home, which regularly sends an overflow of about 10 patients into local hotels.

When it’s finished, Larga Kitikmeot will contain 28 double bedrooms. There will also be play areas on each floor, an elevator, a large kitchen equipped with a country food preparation area, a dining room, lounge, offices and an outside sitting area.

Larga Kitikmeot will also provide airport pick-up, transportation to medical appointments, trips to malls and even the delivery of meals to the hospital when required.

Two vans will pick up and let off patients in an insulated indoor garage area so no one will be obliged to wait outside during the winter, said Tim Zehr, the president and COO of Nunasi, as he showed off the new residence’s construction site in Yellowknife last week.

Like the other Larga patient boarding homes in Edmonton, Winnipeg and Ottawa, Larga Kitikmeot will be built and managed by a joint venture between Nunasi Corp., which is owned by the Inuit of Nunavut, and a regional Inuit association — in this case, Kitikmeot Corp.

Involvement in the Yellowknife boarding home project “makes us proud about what we do” because it directly helps beneficiaries, Zehr said.

“We don’t want it to be like a hospital,” he said.

For years, the GN dragged its heels on building a new patient boarding home in Yellowknife because the Kitikmeot regional health centre in Cambridge, which opened in 2005, was supposed to reduce the need for medical treatment and patient care in Yellowknife.

But the Cambridge Bay centre remains understaffed, and Yellowknife continues to require 9,000 and 10,000 bed-nights a year for patients and escorts.

When the new residence is finished, Nunasi and its partners will have a total of $28 million invested in boarding homes for Nunavut patients in Yellowknife, Edmonton, Winnipeg and Ottawa. 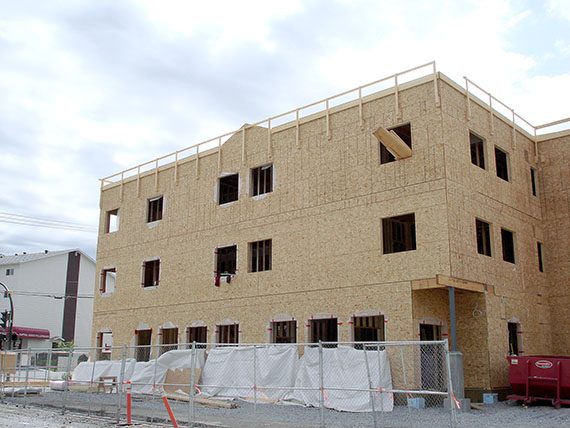 A joint venture between Nunasi Corp. and Kitikmeot Corp. is putting up a new boarding home at the corner of Franklin and Matonaabee streets in Yellowknife for patients from the Kitikmeot. Called Larga Kitikmeot, it should be finished by the end of this year. (PHOTO BY JANE GEORGE)