‘We want to find out who is censoring us,’ says Zacharias Kunuk 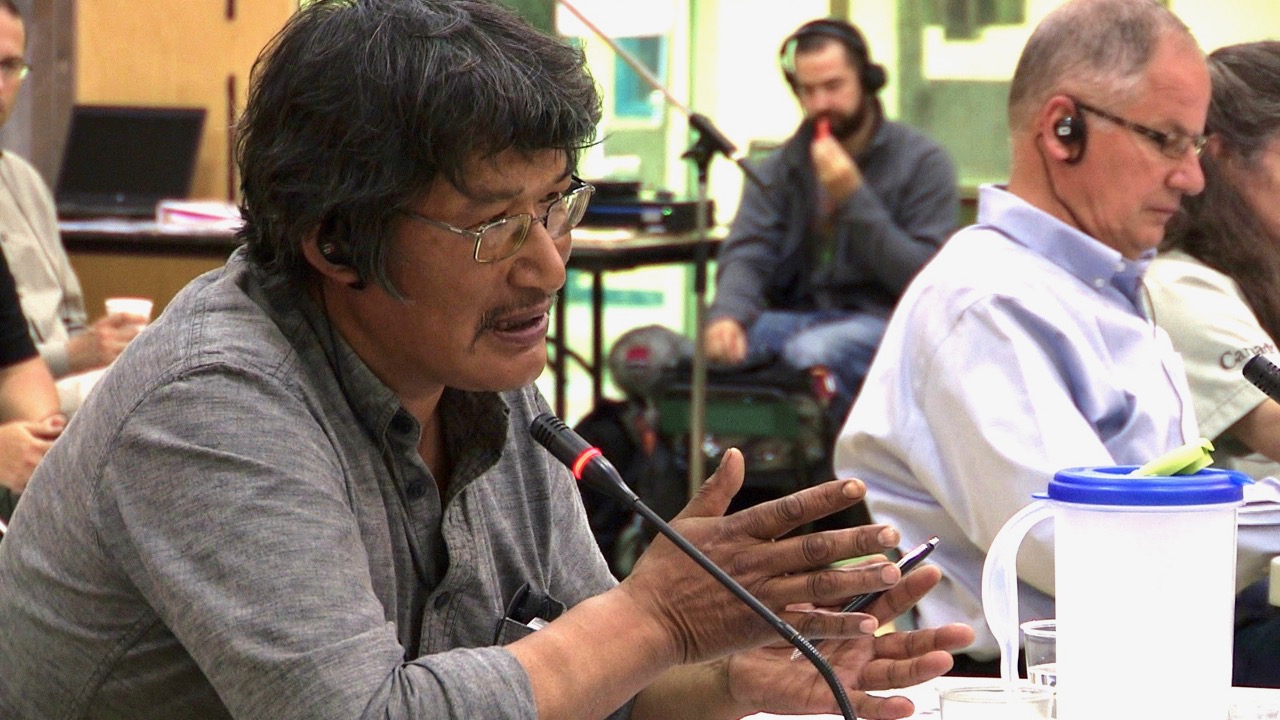 Zacharias Kunuk, shown here speaking at a July 2012 public hearing by the Nunavut Impact Review Board in Igloolik, says Nunavut Independent Television is now being “censored” by the board, by being forbidden to rebroadcast parts of the hearing on Baffinland’s expansion plans. (Photo courtesy of Isuma Distribution International Ltd.)

Nunavut Independent Television is blasting a decision that forbids it from rebroadcasting the hearing on the plans of Baffinland Iron Mines Corp. to expand its Mary River mine.

“We know we are being censored. We want to find out who is censoring us,” said Igloolik filmmaker Zacharias Kunuk, who is an NITV board member, in a Monday news release.

Kunuk’s comments came after the Nunavut Impact Review Board told NITV that the hearings on the Mary River mine expansion can only be streamed live, with prior permission, and cannot be rebroadcast.

That applies to the hearing now underway in Iqaluit and to earlier parts of the hearing, the NIRB said.

NITV maintains that the board has shifted its rules for rebroadcasting. In November 2019, the NIRB permitted NITV to rebroadcast public hearings on IsumaTV, NITV said.

“NIRB now seeks to limit wider access to information by community members by prohibiting reasonable and necessary rebroadcast of public hearings that impact the future of all Inuit,” the NITV release said.

NITV, which launched Uvagut TV earlier this year, had earlier asked the board for permission to rebroadcast parts of the hearing from February.

Many Igloolik residents may have missed broadcasts of the hearing at that time due to a fire at their local co-operative store, which cut off cable TV service, NITV said.

But NIRB chairperson Kaviq Kaluraq responded in a letter that “while the board is engaged in decision-making, the board will not consider requests for rebroadcast or retransmission of the proceedings associated with the assessment.”

There are other ways to follow the NIRB’s proceedings, Kaluraq said. These include media coverage, transcripts and audio files posted on the NIRB’s public registry.

Kaluraq also expressed concern that rebroadcasting parts of the hearing “out of context creates an incomplete picture.”

When NITV made its request, it said that public access to the hearing ensures community participation and fosters confidence in the assessment process.

NITV also wanted advance permission for Uvagut TV to rebroadcast this month’s hearings during the evening and overnight so that more Nunavummiut would have the opportunity to view them.

NITV said it would rebroadcast only interveners and community participants who consented to be rebroadcast.

And it said it would respect privacy rights by blurring the images of third parties that may be visible in the frame.

But the NIRB said blurring the images would not address the rights and expectations of participants in the reconvened hearings.

The NIRB said interested members of the public and the media have full access to all documentation, including transcripts and audio files, at the NIRB’s public registry.