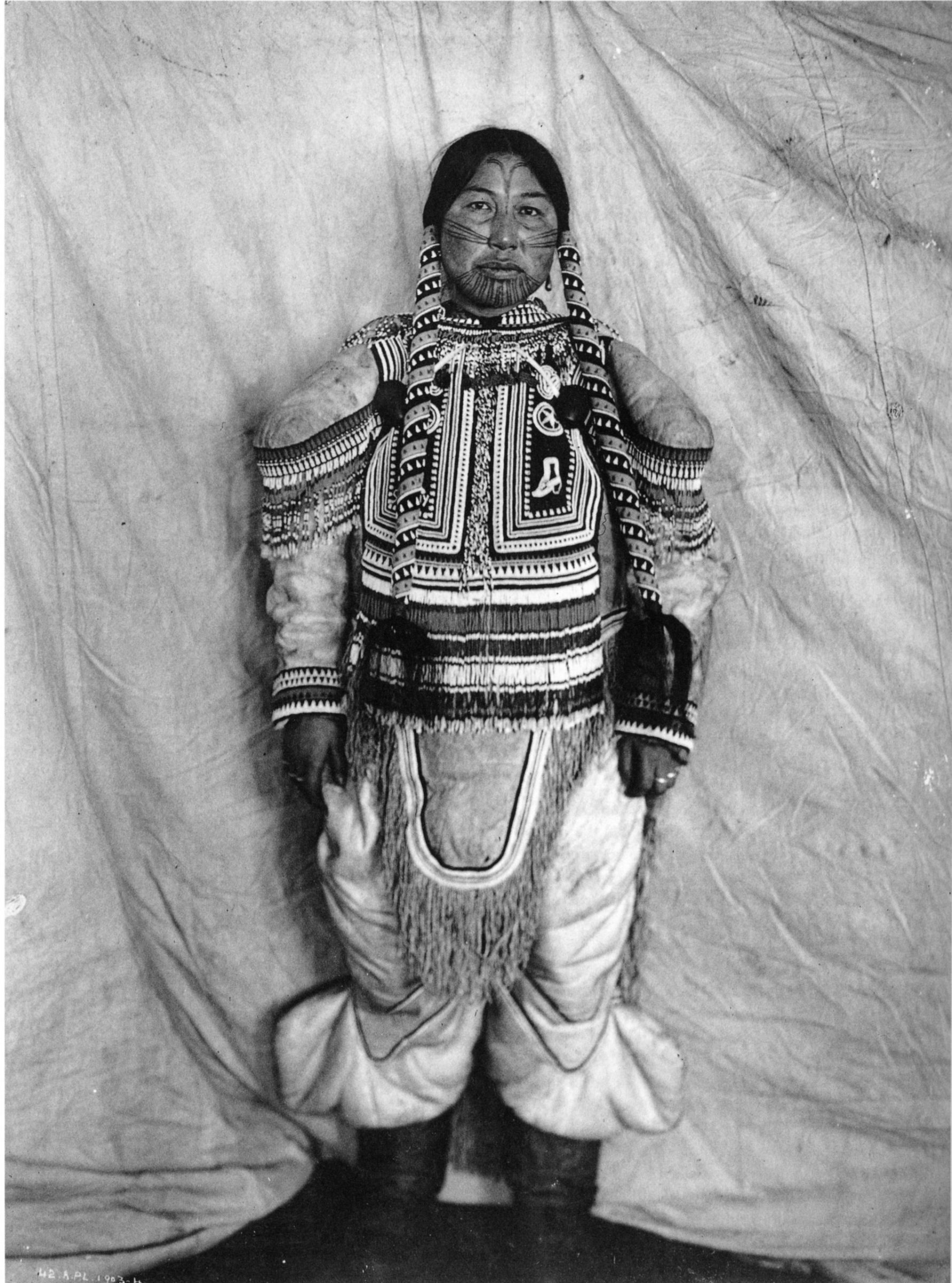 Niviatsarnaq, also known as Shoofly. Her facial tattoos are not authentic. They were drawn on her face at the suggestion of Capt. George Comer, who wanted to document a style of facial tattooing. (Photo from A. P. Low, The Cruise of the Neptune, in Library and Archives Canada, PA-53548)

On Southampton Island in 1922, Mathiassen ran afoul of a powerful Inuit woman — he called her the group’s “evil genius” — who urged her husband to kill the Danish archeologist. She claimed that his behaviour had violated certain taboos and caused illness in their camp.

She was Niviatsarnaq. Then probably in her late sixties, she had led an interesting life at the junction of two cultures.

He lived for a time with an Inuit woman, Ukkuq, by whom he had one child, Pamiulik. Ukkuq died giving birth to Comer’s second child; the baby did not survive.

After Ukkuq’s death, her sister, Niviatsarnaq, lived aboard ship as Comer’s northern “wife” whenever the captain was in the country.

Comer had a qallunaaq wife back home in East Haddam, Conn. Niviatsarnaq was one of two wives of an Inuit man, Auqqajaq, who worked with Comer and saved his life in 1894 when Comer fell through thin ice.

Joe Curley, the son of another Inuk who worked for whalers, said he didn’t know how many years Comer and Niviatsarnaq were together but “whenever he came up here, she would travel with the captain. They were looked upon as man and wife.”

Most whalers were incapable of pronouncing Inuit names correctly. Instead they gave them nicknames. That’s why they called Auqqajaq by the name Ben. His son Aullanaaq was known as John L., after a famous boxer, John L. Sullivan. He is the progenitor of today’s many Ell families in the eastern Arctic.

Of course, Niviatsarnaq was also given a nickname. She was called Shoofly, after a popular American song, “Shoo Fly, Don’t Bother Me.”

Auqqajaq’s death in 1905 occurred the same year that Comer departed for the south after a two-year wintering. The following year, he wrecked his well-known ship, the Era, off Newfoundland on his way north. He would return the following year with another ship, the A. T. Gifford.

By then Niviatsarnaq had taken a new husband. He was Angutimmarik, a powerful shaman who had worked for many years for Scottish whalers in the bay. He was known to them as Scotch Tom. They were living on Southampton Island when Mathiassen met them.

Mathiassen thought Angutimmarik was a “highly respected shaman,” but noted that he had a high estimation of his own worth.

He told Mathiassen: “As to myself, I believe I am a better shaman than others among my countrymen. I will venture to say that I hardly ever make a mistake in the things I investigate and in what I predict. And I therefore consider myself a more perfect, a more fully trained shaman than those of my countrymen who often make mistakes.”

Inuit interviewed by Dorothy Eber in the 1980s remembered that Angutimmarik had a sophisticated understanding of illness.

One Inuit woman remarked, “I think everyone remembers that man. Nobody was ever to use his things.… In our camp a couple of people were really sick, and Angutimmarik began doing his magical things to discover who was causing the illness. After using his magic, he knew I had used his cup, and he told me I was not to do this because in this way he would pass all his germs to me.”

Angutimmarik and Niviatsarnaq were “militantly anti-Christian.” Angutimmarik told Mathiassen that, although some in Repulse Bay had become Christians, he himself knew nothing of Jesus and as long as he knew nothing of him, he would stick with his old ways.

He said that the Scottish whaler, John Murray, had made fun of him and said that shamans did not speak the truth. But, he told the Dane, Murray had once said to Iteruuseq, a shaman, “Take out your two big front teeth without touching them to show that you are a shaman.”

One of the man’s teeth fell out. Murray then took hold of the other one but couldn’t budge it, but shortly after it fell out too.

Both Catholics and Anglicans established mission stations on Southampton Island in 1926. The following year, Father Fafard commented on the extraordinary influence that Niviatsarnaq exerted on all the Inuit of the island. He called her by her nickname, Shoofly, and said she was the queen of Southampton Island.

She was an excellent seamstress, and he reported that she had created a sewing school where she taught several girls. Her waterproof sealskin boots were said to be the best. She was the first woman in her community to have a sewing machine.

Joe Curley, Angutimmarik’s son by another mother, said, “She was a wise person… People looked to her for advice… She was regarded as one of the leaders among our people.”

Even men came to ask Niviatsarnaq’s advice on various matters. In fact, she was so influential that Angutimmarik became jealous of her prestige.

Another priest, reporting what he had heard from Father Fafard, wrote: “When he [Angutimmarik] had puppies, he kept a young female and called her ‘Shoofly.’ When she was six months old, he harnessed her and delighted in whipping her repeatedly, shouting each time ‘Shooflyruluk! (wretched Shoefly).’”

The northern family kept in touch with Comer in his eventual retirement. John Ell — Aullanaaq — wrote to him in 1933, thanking him for a box of items sent the previous summer and giving him the sad news that his mother was in failing health.

He wrote that he was employed by the Hudson’s Bay Company and had purchased a large boat, and he asked for three barrels of gasoline and some Winchester rifles.

“If you send me this, I will be very glad,” he closed.

Niviatsarnaq — the famous Shoofly — passed away in the 1930s, Angutimmarik in the 1940s.