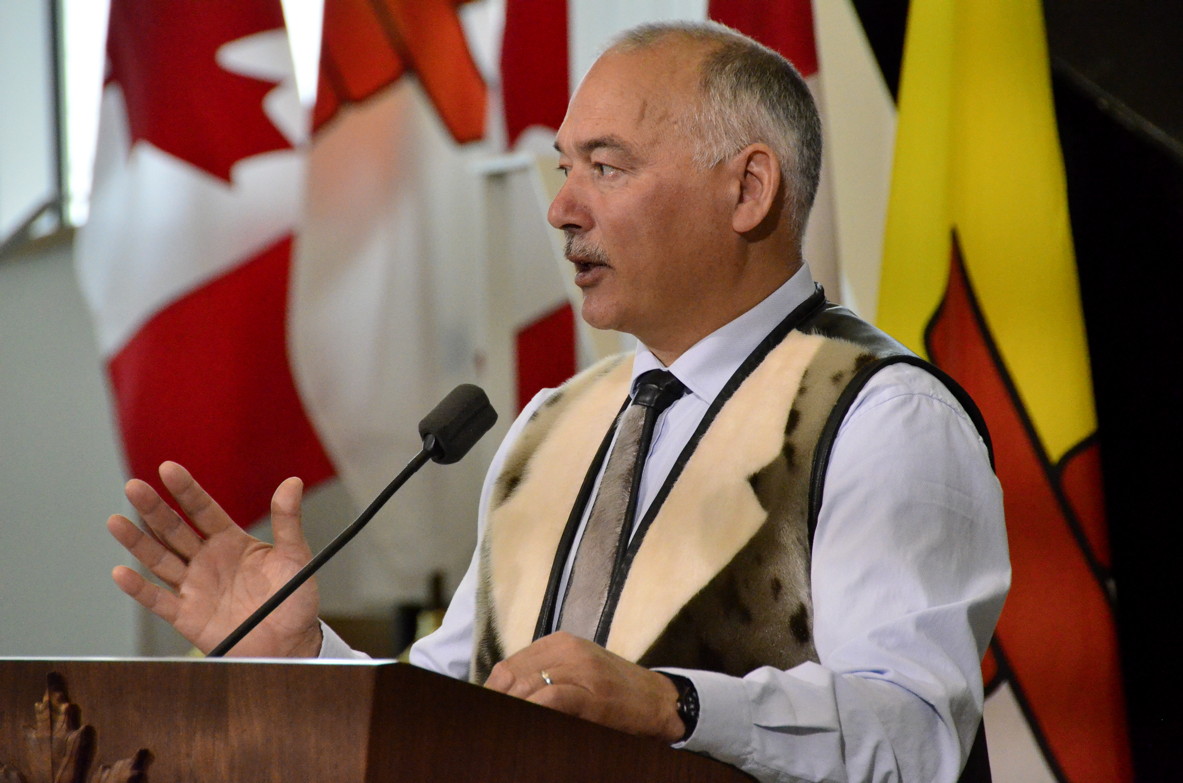 Nunavut Premier Joe Savikataaq speaks in Iqaluit on Aug. 1, 2019, at a ceremony marking the official completion of a deal to create the Tallurutiup Imanga National Marine Conservation Area in and around Lancaster Sound. Savikataaq now says Canada should create no more protected areas in Nunavut until after the completion of a devolution agreement to transfer authority for public lands and resources from Canada to Nunavut. (Photo by Jim Bell)

The Government of Nunavut won’t support any new marine protected areas, or any other federal conservation areas in the territory, until after a devolution deal between Canada and Nunavut is completed, says Nunavut Premier Joe Savikataaq.

“The creation of any new conservation and protected areas in Nunavut would have a significant impact on our ability to manage our lands and resources, and carry out negotiations for decision-making, leading to potentially very serious consequences,” Savikataaq said in a statement in the legislature on Thursday, Feb. 20.

Savikataaq also suggested that to meet future protected area targets between 2020 and 2030, the federal government has been taking advantage of Nunavut’s powerlessness over lands and resources.

“Knowing the extent of Nunavut’s coastline and the limited opportunities to create new marine conservation areas elsewhere in Canada, we are concerned that the federal government may once again turn to Nunavut to meet their goals,” Savikataaq said.

As well, the GN does not have the power to collect royalties from mineral production on public lands.

And without a devolution agreement, Nunavut cannot develop its own protected area strategy—unlike every other province and territory in Canada.

“These strategies provide context and direction for resource exploration and development,” Savikataaq said.

A long sought-after devolution agreement would change that by transferring public land management functions to the GN, along with a formula that would let Nunavut collect royalties from resource development.

To that end, representatives from the GN, the federal government and Nunavut Tunngavik Inc. signed an agreement in principle that would see a final devolution deal by 2022, with a transfer of authority by 2025.

That devolution AIP also contains a commitment to start talks on offshore oil and gas management at some point in the future.

But Savikataaq said the GN is worried the federal government’s new protected area targets could limit what Nunavut could get from such a devolution agreement.

Those new protected area targets, which Ottawa is developing right now, would cover the period between 2020 and 2030, and Savikataaq fears that would interfere with devolution talks.

He pointed out that the federal government met its last protected area target largely because of the Tallurutiup Imanga National Marine Conservation Area and the Tuvaijuittuq Marine Protected Area, announced last summer.

“It is vital that we set the foundation for future generations and ensure that we do not inadvertently miss critical sustainable economic opportunities for our communities,” he said.