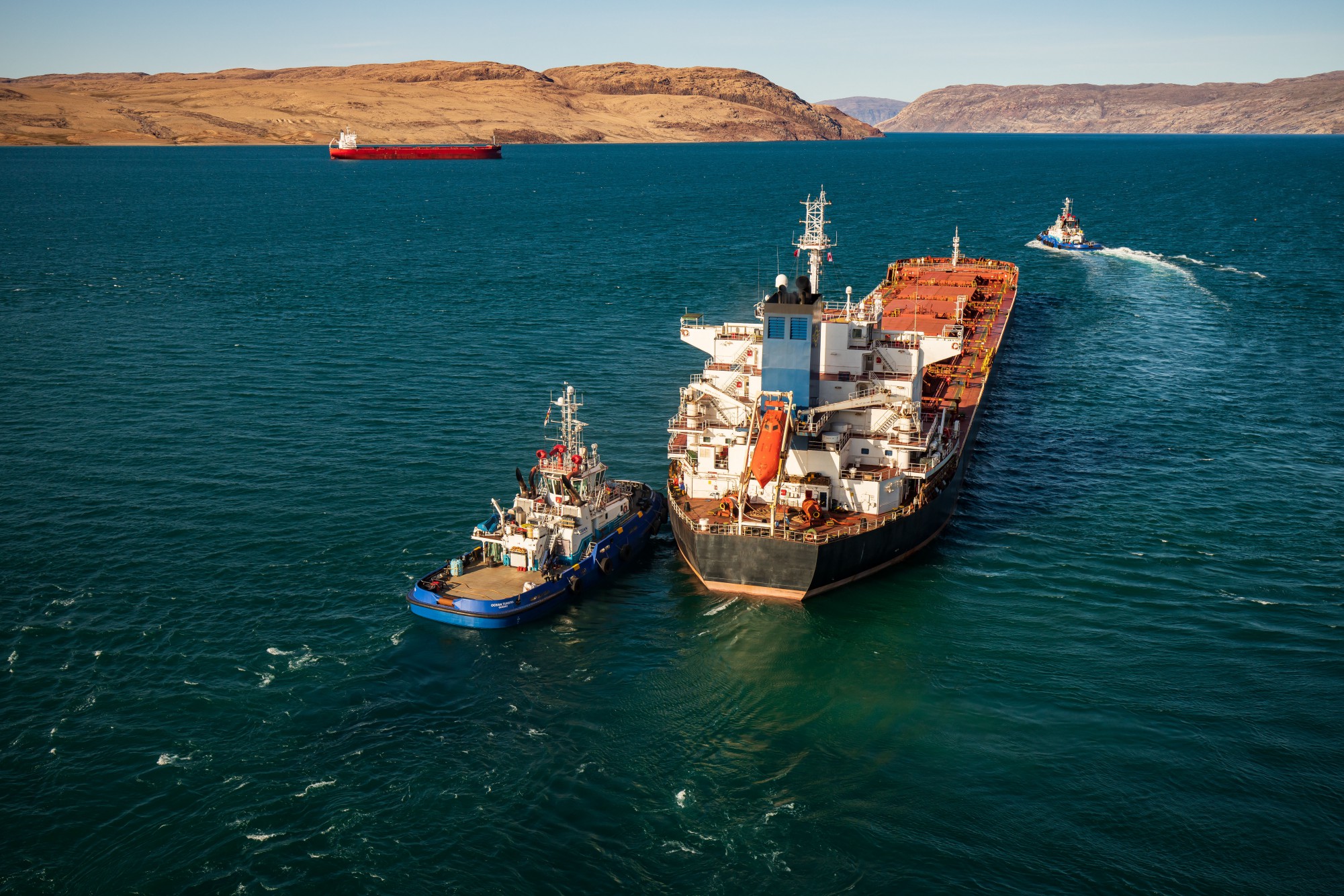 A ship apporaches the Mary River iron ore mine in this undated photo. On Monday, three opponents of the company’s Mary River mine expansion proposal issued a statement to the Nunavut Impact Review Board calling for a 10-year moratorium on iron ore shipping increases. (Photo courtesy of Baffinland)

The hunters and trappers associations for Hall Beach, Igloolik and Arctic Bay want the Nunavut Impact Review Board to stop the mine from increasing its ore production for 10 years. They also want the review board to recommend against allowing the mining company’s expansion proposal. NIRB is responsible for evaluating the social and economic impacts of developments projects, such as a mine expansion, and making a recommendation to the federal government about whether a proposal should be approved.

The Hall Beach and Igloolik HTAs also want the company to be barred from building and operating a port at Steensby Inlet. The company was granted a project certificate to do so in 2012.

The hunters and trappers associations spelled out these positions in closing statements sent to the review board on Monday.

As it stands, Baffinland is permitted to ship six million tonnes of iron ore a year from Milne Inlet. The company wants to double its shipments and to build a 110-km railroad between the mine and Milne Inlet and a dock at the port.

More than two years after the board’s public hearings on the proposed mine expansion began, hunter representatives continue to raise a range of concerns about the environmental impact of the mine’s operations.

Arctic Bay’s Ikajutit HTA chairperson Qaumajuq Oyukuluk said the impacts of the expansion could be “devastating.”

“We must be cautious and fully understand the impacts of the existing operation and steps needed to mitigate negative impacts before rushing forward and expanding this development,” Oyukuluk wrote in the association’s statement.

Clyde River Mayor Alan Cormack and Nangmautaq HTA chairperson Apiusie Apak, in a joint closing statement, did not specifically call for a moratorium.

But they said affected communities need time to determine if decreases to narwhal stock and other environmental problems are due to mining, before any increase in shipping is allowed.

Under the Nunavut Planning and Project Assessment Act, the review board has the ability to recommend a condition, such as a moratorium, to the federal northern affairs minister, who can then approve the new condition even if a project is already approved.

Karen Costello, executive director of the review board, said the last time she can recall the board receiving submissions for a moratorium was for Areva’s Kiggavik uranium mining project, which didn’t get approved.

Costello, who would not comment directly on Baffinland’s ongoing proposal, said the board has never issued a project certificate containing a moratorium.

The Qikiqtani Inuit Association does not support the expansion, either, and referred to the ongoing impacts brought up by HTAs.

“Inuit are only beginning to experience the scope of impacts of the initial project,” the statement reads, adding that there are increasing concerns that the plans Baffinland has in place to mitigate impacts are not working.

Some organizations and hamlets involved are starting to support the expansion, however.

Pond Inlet Mayor Joshua Arreak, in the hamlet’s final statement, listed a number of benefits the mine has brought or will bring to the community, including more than $16 million paid in wages to residents since 2015 and the commitment to a $10-million Inuit training centre if the expansion is approved.

The deadline for Baffinland’s final submission is Jan. 24. The board will then decide if it has enough information to make its recommendation and close the hearing.

It’s up to Northern Affairs Minister Dan Vandal to approve or reject the project after he receives the board’s recommendation.