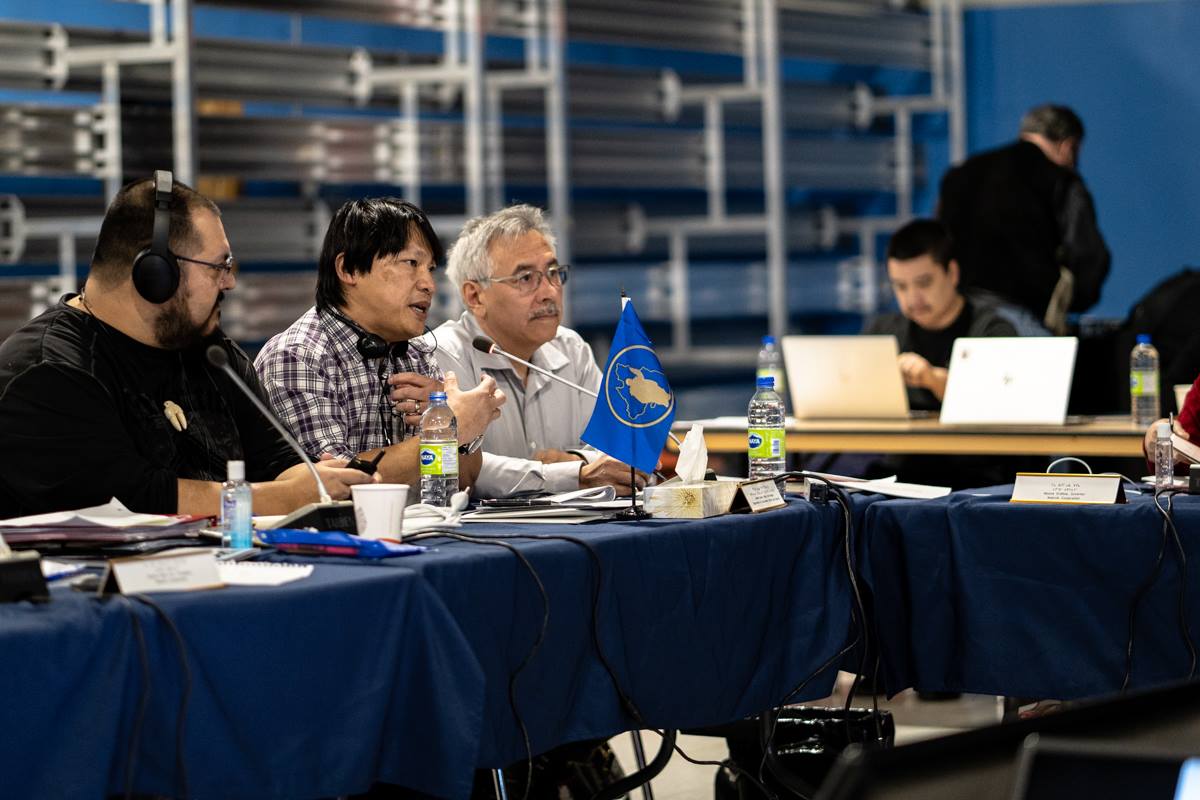 Chris Avery, president and CEO of First Air, centre, with the airline’s chairperson Johnny Adams on the right, speaks to a Makivik Corp. meeting in Puvirnituq earlier this month. (Photo courtesy of Makivik)

First Air is calling on the federal Transport Ministry to widen the scope of a review of its proposed airline merger with Canadian North.

When the two airlines announced plans to merge last year, it triggered public interest reviews by both Transport Canada and the Competition Bureau.

The latter released its report this week, which called the proposed transaction “a merger-to-monopoly.” The bureau raised concerns over its potential to raise prices and reduce flight schedules across the North.

But as its mandate suggests, the Competition Bureau only considered the competition aspect of the merger, said Christ Avery, president and CEO of First Air.

“The frustration is two-fold; one, the Competition Bureau really stopped short in their work, in our view, and they didn’t evaluate the efficiencies that would be created by the merger of the two airlines,” Avery said.

“The other part of the frustration is that there are two privately-held, Inuit-owned organizations that are striking a commercial deal to try and provide the best possible service for the North, and also try to protect the investment of their Inuit shareholders.”

Neither airline receives any government subsidies for providing an essential service, Avery noted.

“So we urge Transport Canada to take a much broader and more complete view of the merger,” he said, adding it should consider the economic and social factors of northern air travel.

“Which we believe they will.”

The bureau’s report, now submitted to Transport Canada, warned that the merger could translate into less capacity for both passengers and cargo, fewer flights and an increase in air fares.

The chance of seeing other competing airlines enter the market is low, the report said—even on a high-volume route like the Ottawa-Iqaluit flight, currently serviced by both First Air and Canadian North.

Avery tried to quell concerns about the monopoly the new airline would create, saying the airlines’ Inuit ownership means it has its shareholders’ best interests at heart.

“The organizations are committed to providing the best service to the North and particularly their own friends, families and their communities,” he said.

“It’s a closed system. These aren’t profits that are generated for some faceless fund or entity in the south.”

First Air, owned by Nunavik Inuit (Makivik Corp.), and Canadian North, owned by the Northwest Territories’ Inuvialuit, are still in discussions with Inuit organizations in Nunavut to have them sign on as shareholders to the new merged airline.

In the meantime, the airlines now await Transport Canada’s own review, which will be passed along to the federal cabinet to make a final decision.

The airlines initially envisioned that the new airline would be up and running in early 2019, though the federal government has no deadline for when it must issue its decision.

“But we feel confident that the merger will ultimately be approved.”