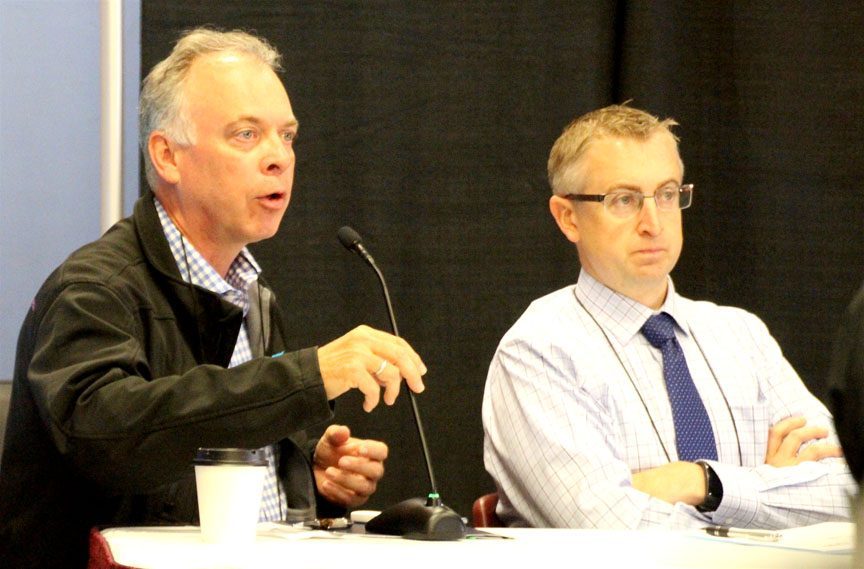 Dean Proctor, left, of SSi Micro and Curtis Shaw of Northwestel at a seminar held at the Nunavut Trade Show in Iqaluit in September 2017. (FILE PHOTO)

“The government should look to abandon any obligation for subsidy recipients in Canada’s north to offer wholesale access; instead, promote affordability through retail price commitments,” Shaw had told the House of Commons standing committee on northern affairs.

Those remarks are of concern to competing firm SSi Micro, which offers the Qiniq network to customers in every Nunavut community.

That’s because Northwestel received $49.9 million from the federal government’s Connect to Innovate, or CTI, fund in 2017 to offer improved internet in Nunavut through its Tamarmik Nunaliit network.

“We did receive transcripts, and are very concerned when Northwestel, a recipient of federal CTI [Connect to Innovate] funds, asks the federal government ‘to abandon any obligation for subsidy recipients in Canada’s North to offer wholesale access,’” David Veniot, the communications manager at SSi Micro, told Nunatsiaq News on Wednesday.

“If Northwestel claims that this has been misunderstood and does not apply to CTI funding obligations, then they should clarify,” Veniot said.

Aimee O’Connor, the communications manager at Northwestel, said on Wednesday afternoon that the quote about wholesale access was just the fourth point of a four-pronged speech about how public policy can help lower internet prices in northern Canada.

While Shaw did say the federal government should abandon its requirement that subsidy recipients offer wholesale access, that was not in relation to the Tamarmik Nunaliit network in Nunavut, or any other current projects, O’Connor said.

Instead, she said Shaw’s presentation was about future infrastructure projects in the North.

“In the transcript from this meeting with the federal government, you will notice that we are not discussing our Tamarmik Nunaliit network, which was funded by the Government of Canada’s Connect to Innovate program,” O’Connor said.

“We are fully committed to all of the wholesale open access provisions under the CTI program.”

Veniot said that in his own presentation two days later on behalf of SSi Micro, he urged the federal government “not to endorse proposals that would permit parties—like the incumbent phone companies—who happily apply for and take public funding for backbone networks, and then turn around and undermine the basic wholesale requirements that are core to that funding.”

Still, Veniot says SSi Micro is hopeful it will reach an agreement with Northwestel soon to gain access to its faster satellite bandwidth.

These negotiations have been going on for about a year.

“The sooner the better for the benefit of our Qiniq customers,” Veniot said.

In Shaw’s opening remarks on Nov. 5, he made four recommendations.

“The first one is to allocate specific funds that address the northern infrastructure deficit and that recognize the unique characteristics of operating here and the high cost of infrastructure development in the North,” O’Connor said.

The second was to “consider the broad benefits of the initiative both today and into the future” when it comes to major infrastructure projects.

Third, the government should set aside “funds specifically to build infrastructure and address redundancy concerns in remote and rural locations in Canada,” she said.

Finally, Shaw said in his remarks that the government should abandon obligations that subsidy recipients in the North offer wholesale access—but O’Connor said this was not about Tamarmik Nunaliit.