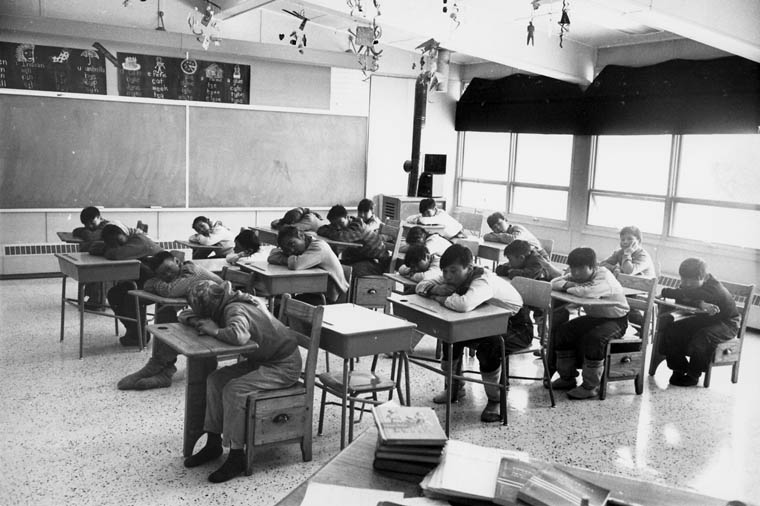 Students at Cape Dorset (Kinngait) Federal Hostel, in April 1964. A nationwide class action lawsuit against the Canadian government for survivors of federal Indian day schools has reached a proposed settlement amount, which is expected to be approved by a federal court next month. (Library and Archives Canada)

A federal court has rejected an Inuit group’s motion to intervene in a class action lawsuit for survivors of Indian federal day schools.

Nunavut Tunngavik Inc. was among six groups and plaintiffs that applied to intervene in the McLean Day Schools Class Action, first launched in 2009 for survivors of day schools who were excluded from the Indian Residential Schools Settlement Agreement.

Federal Court Justice Michael Phelan denied NTI’s motion April 25, along with that of the Federation of Sovereign Indigenous Nations, the Grand Council of the Crees and three individual plaintiffs.

In its application, NTI said the scope and timeline of the proposed settlement was “inappropriate” and did not represent the interests of Nunavut Inuit.

That’s because the proposed settlement was made public on March 14, though eligible former students only have until May 3 to file objections, the Inuit land claim organization said.

“The Inuit of Nunavut have limited access to information and little current awareness of the day school issues, and are unable to meaningfully engage in this deadline,” NTI said in its application.

“The claims process and claims deadline contemplated by the proposed settlement do not reflect the reality in Nunavut and impose significant barriers to meaningful access to justice and reconciliation.”

The lawsuit could pay students anywhere from $10,000 for harms associated with attending a day school to a maximum of $200,000 for repeated sexual abuse or physical assault that led to long-term injury.

In Nunavut, there were 25 eligible federal day schools under the settlement. The number of eligible students is unclear; NTI did not respond to Nunatsiaq News’ request for an interview.

Earlier this year, the land claim organization, alongside Nunavik’s Makivik Corp. and the Inuvialuit Regional Corp., raised concerns that the funds in question are to be paid to and administered by a corporation in which there is no Inuit representation.

The law firm Gowling WLG (Canada) LLP is set to receive the $55 million pay-out and will continue to act as the claimants’ class counsel under an additional $7 million in trust payment.

In a January letter to Crown-Indigenous Relations Minister Carolyn Bennett, NTI, Makivik and IRC asked the minister to ensure that Inuit organizations have a role in that process.

One of those groups confirmed that the minister’s office sent a response to the land claims group just this month, though it’s unclear if Ottawa intends to address their concerns.

In Nunavik, there are an estimated 3,000 former students from 11 different schools who could be eligible under the day schools’ agreement.

Makivik Corp. says students who attended federal day schools not yet listed in the settlement agreement can request to be included in the agreement by contacting the class counsel at lessard@gowlinggwlg.com or at 1-844-539-3815.

Nunavimmiut with questions about their eligibility can also contact Makivik’s legal department at 418-522-2224 ext. 4.

The proposed settlement is subject to federal court approval at hearings scheduled May 13-15 in Winnipeg.