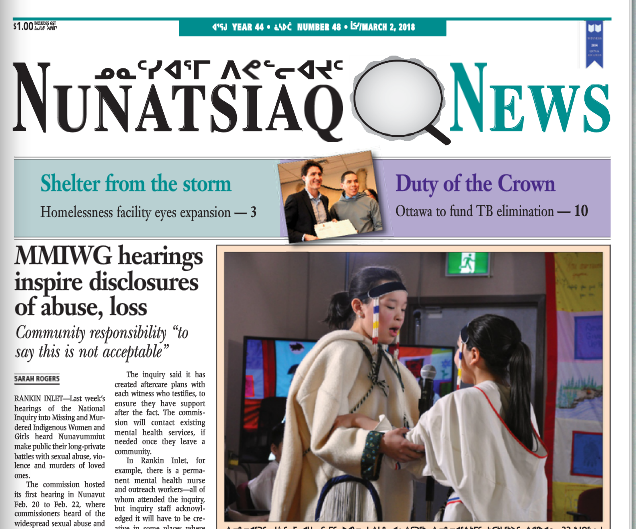 Sarah Rogers took home the prize for best feature series at the Quebec Community Newspaper Association awards, for stories she wrote while covering hearings held in Nunavut by the National Inquiry into Missing and Murdered Indigenous Women and Girls.

Nunatsiaq News picked up an armful of awards on Saturday, June 8, at the annual Quebec Community Newspaper Association gala at the Hotel du Lac Carling in Grenville-sur-la-Rouge.

The newspaper was nominated for 15 awards this year.

“It’s a great honour to be recognized for outstanding journalism by our peers in the newspaper industry,” said Nunatsiaq News’ publisher, Michael Roberts.

“It takes a great team to create the best community newspaper website in Canada. It’s a credit to our superb editorial team, and our design, advertising and production staff. Thanks to all our engaged readers and advertisers for helping make this happen.”

Reporter Beth Brown was honoured this year with the Paul Dumont-Frenette Outstanding Journalism award, a special award of merit chosen by the judges after considering all written entries in a given year.

According to the QCNA, Brown’s work “was praised across the board by the judges.”

This was a bittersweet win for the paper, because Brown, who had worked at the newspaper for nearly two years, recently left to join Up Here magazine as an associate editor.

Brown received five nominations for her writing. She won the first prize in the following categories: best education story for her feature on the on-the-land education program offered by Nuna School in Apex, best municipal story for her story about Pangnirtung’s public pleas for help with youth wellness and addictions, and best community health story for her story about a role-playing computer game that’s being tailored to Inuit culture to help combat mental illness. 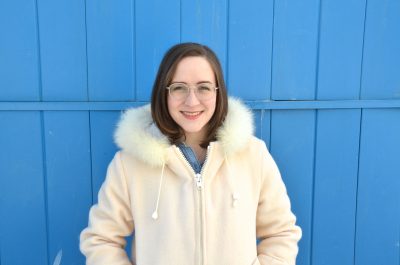 Brown’s story, with photographs, that captured Iqaluit coming together following a bowhead whale hunt was runner-up in the best feature story category.

Brown’s article about the ongoing controversies over how to best regulate Nunavut’s polar bear hunt placed third in the best environmental story category.

Here are the other awards handed out at the ceremony on June 8:

Nunatsiaq News has its origins in Inuksuk, a not-for-profit newspaper that was published between 1973 and 1975 in Iqaluit. Under the name Nunatsiaq News, the paper has served eastern Arctic communities in Nunavut and Nunavik since July 1975.